Kids at this hospital were terrified of the machines — until they got a makeover. 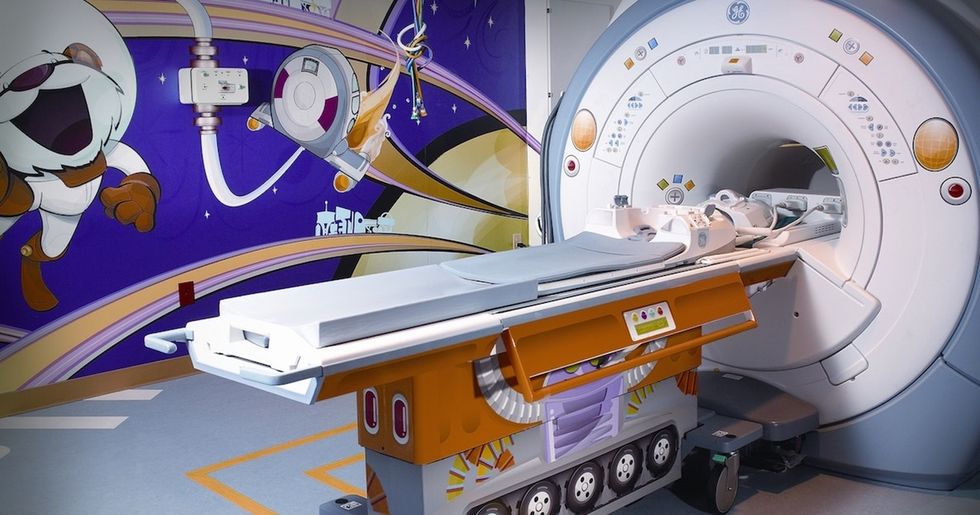 When industrial designer Doug Dietz went to the hospital to see the inaugural scan of a brand-new MRI machine he designed, what should've been an exciting event quickly turned somber.

The patient coming in for a scan was a young girl. And she was petrified.

The huge, hulking machine had the girl in tears — and that was before the loud whirring noise started up (the average MRI machine is about as loud as a rock concert, and not nearly as fun).

"As [the family] got even closer to me, I notice the father leans down and just goes ‘remember we talked about this, you can be brave," he recalled to GE Health, explaining that the parents looked horrified too — feeling helpless to find a way to make their daughter feel comfortable in the giant machine.

Dietz went back to the drawing board.

He was determined to use his design know-how to make the hospital environment for kids feel more like an adventure instead of a nightmare.

All photos by GE Healthcare,  used with permission.

After interviewing kids, parents, and doctors about what might make the experience of getting a medical scan a little less scary, Dietz and his team from GE Health got to work, along with partners from the Children's Hospital of Pittsburgh.

It wasn't just the machines that got a makeover.

The whole exam room needed some love. From the sterile, beige decor, to the frank instruction placards (Dietz calls them "crime scene stickers"). Even the patter (or conversation/instructions) from doctors and nurses needed some livening up.

The team developed themes that could bring each exam room to life.

The redesigned MRI machine and rooms turned the kids into active participants in their own fantastic adventure stories, with themed books given ahead of time to prepare them for the journey.

Inside the scanning machines, the children get special goggles that allow them to watch a DVD during their scans — which can take anywhere from 10 to 45 minutes.

When the first newly designed rooms were put into action at the Children's Hospital of Pittsburgh, they worked like a charm. Not only did they calm the kids down and keep their minds occupied, Dietz recalled hearing one child ask her parents if she could have "another scan tomorrow."

"That was probably the biggest reward I could ever have," he told the Journal Sentinel.

Dietz's designs are so popular and successful that many other hospitals have joined in on the fun.

The project, called the Adventure Series, isn't just something that makes kids smile. It allows the hospital to help more people.

According to an article in the Milwaukee-Wisconsin Journal Sentinel, the fear of machines and tests is so bad that Children's Hospital of Pittsburgh had to sedate over 80% of kids who needed an MRI or CT scan, prior to the updates.

Sedating and calming anxious patients takes extra time, elongating the length of each scan. If the kids don't need sedation, but don't hold still during the duration of the test, the whole thing has to be redone. These issues take up precious time that ultimately resulted in the hospital serving fewer patients.

After implementing the Adventure Series, the hospital only had to sedate a quarter or less of its patients, making their work far more efficient.

Making the experience less frightening for kids is a big win here — for the patients and hospitals too. There's nothing that can completely erase the anxiety that comes with needing serious medical testing or care, but just knowing there are people who care enough to try is likely a big comfort to these families.