KFC demoted an employee for wanting to pump at work. She just won a $1.5 million lawsuit against them. 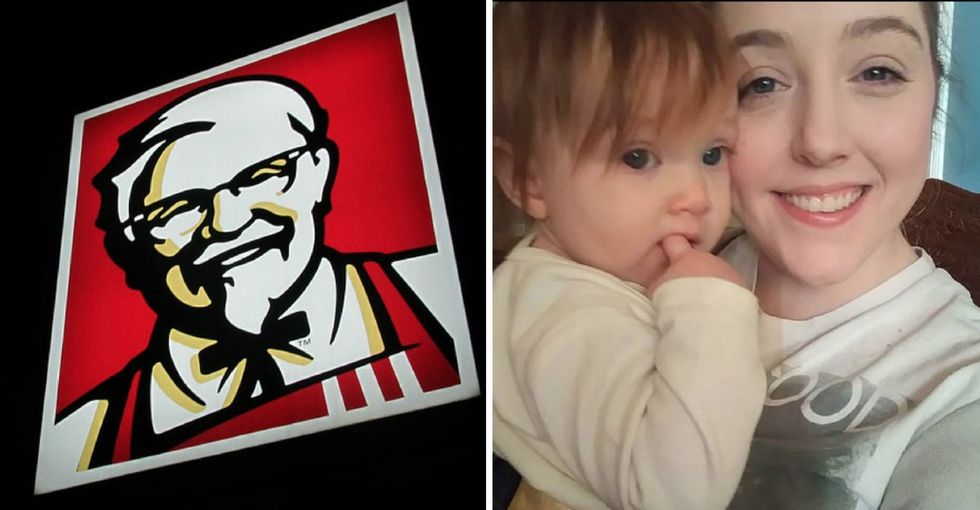 Women have been re-entering the workforce after giving birth for decades now. You would think that employers would know how to treat new moms back on the job, but apparently some people still have a lot of learning to do.

When Autumn Lampkins was hired to be an assistant manager at a Delaware Kentucky Fried Chicken just months after giving birth, she was told her new job wouldn’t interfere with her need to pump breastmilk. Instead, it did nothing but interfere.

Lampkins claimed the KFC outlet gave her a hard time for wanting (and let’s face it, needing) to pump breast milk during her working hours.

Lampkins filed a lawsuit against her former employer, stating she was demoted over it.

Now, the fast food franchise must fork over $1.5 million to their former employee.

The lawsuit claimed Lampkins’ co-workers and supervisor made it so hard for her to pump milk during her shifts that her milk supply dried up.

As a result, Lampkins experienced pain and had to switch her baby to formula sooner than she had planned. Lampkins was only able to pump once per 10-hour training shift, a far cry from medical recommendations.  Generally, women are advised to pump once every two hours.

The lawsuit also claimed that she didn’t have a private place to pump. Her options were to pump in a single-stall employee bathroom or in the manager’s office, which had a surveillance camera that they were not able to turn off. Sorry, wasn’t there a recent controversy because women were being shamed for wanting to breastfeed in public? Now we’re shaming women for wanting to pump in privacy? Is there no way to feed your baby in peace?

To make matters worse, Lampkins was demoted at the end of it all.

At the new store, Lampkins’ co-workers complained that she got special “breaks” so she could pump, and even threatened to walk out. As if having to pump breast milk is a privilege, not something that is a necessary part of going back to work after giving birth.

A jury deemed the work environment to be hostile, and found evidence of workplace discrimination. Lampkins was awarded $25,000 in compensatory damages and $1.5 million in punitive damages. “It’s a great day for women’s rights. The jury sent a message that employers cannot treat lactating women differently in the workplace,” said Patrick Gallagher, one of Lampkins’ attorneys.

Working 10-hour shifts while tending to a newborn is hard enough.

Lampkins shouldn’t have been given a hard time for having needs that are completely normal and natural on top of it. Pumping breast milk is a vital part of the process when women re-enter the workforce after giving birth. Kudos to Lampkins for standing up for her rights!