John McCain has died after a brave struggle with cancer. He was a flawed but fiercely independent American icon. 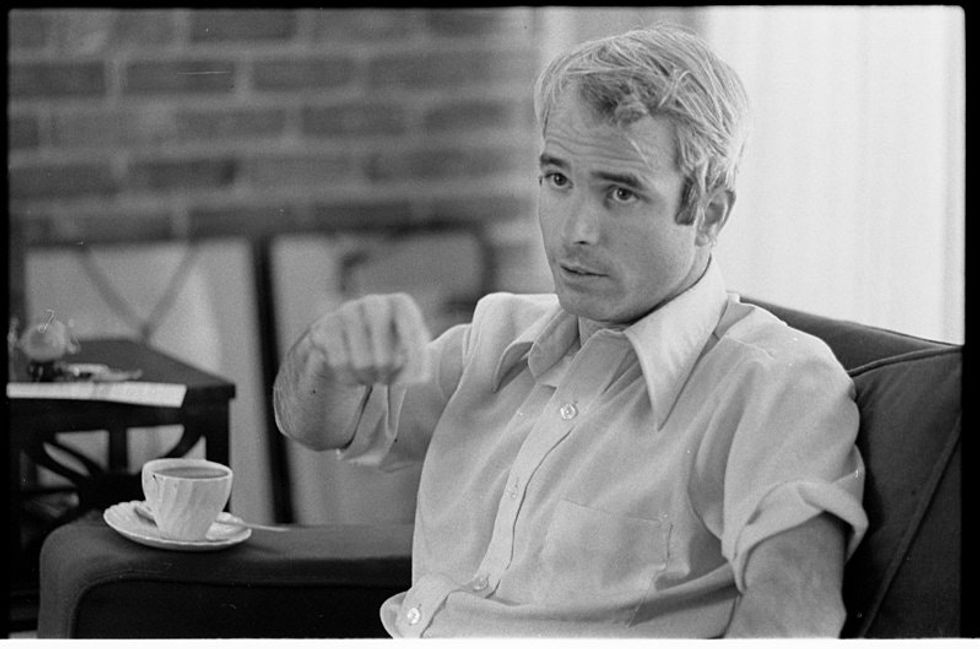 John McCain was an American original. He greatest legacy will be his love of bipartisanship.

The world has spent much of the past year saying a long goodbye to John McCain. On Saturday, August 25, he passed away after a long struggle with brain cancer.

He’s leaving behind a personal and professional legacy that places him in the upper echelon of some of our most memorable political leaders beginning his public life as a prisoner of war during the Vietnam War all the way up to becoming the Republican nominee for president in 2008.

But it’s the things he did between those iconic moments that he’ll be most remembered for.

Here are 7 times McCain famously put his country above partisan politics, leaving our country a little better off for it:

He Said No To Racism.

During the 2008 campaign, a supporter at a rally referred to then-candidate Barack Obama as “an Arab” and someone she could not trust as president. Before she could finish her racist rant, McCain took the microphone from her and declared:

"No, ma'am. He's a decent family man [and] citizen that I just happen to have disagreements with on fundamental issues and that's what this campaign's all about. He's not [an Arab]."

That wasn't the only time McCain took the high road on race. During the same campaign he refused to engage in attacks on the Rev. Jeremiah Wright, saying that any such moves would be perceived as racially insensitive. McCain was also still sore from when his fellow Republicans went to the lowest of lows by attacking him during the 2000 Republican primary. for adopting a young black girl.

He Fought To Get Money Out Of Politics.

It wasn’t that long ago when leading politicians were willing to say no to the corrupting influence of money in politics. In 2002, McCain and Sen. Russ Feingold (D-WI) helped push through a historic campaign finance bill.

That bill was critically wounded by the Supreme Court’s “Citizens United” decision a few years later but the bipartisan accomplishment is still profound. Consider this: McCain worked on a bill with a Democrat and helped get it passed through a Republican-controlled House of Representatives and signed into law by a Republican president, George W. Bush, whom he had just spent months bitterly fighting with on the campaign trail.

To most of us, the Vietnam War is a distant memory. But the conflict left a huge scar on America’s psyche and McCain was a direct victim of it, having spent years as a prisoner of war inside Vietnam.

Nonetheless, McCain worked to restore diplomatic relations between the two countries in bipartisan fashion with fellow Vietnam veteran Sen. John Kerry (D-MA). Those efforts became a historic reality in 1995, something that likely could not have happened without the contributions of these two men.

He Came Around On Climate Change.

Teddy Roosevelt was one of McCain’s heroes. So, you’d think he would have a great record on environmental issues. That wasn’t always the case. But in more recent years, McCain bucked his party to support efforts to save the Great Barrier Reef and to continue America’s role in the Paris climate agreement, despite President Trump’s objections.

He Took The High Road On Judicial Nominations.

Today, our country is divided over the once basic task of nominating and approving a Supreme Court justice. But there was a time not too long ago when McCain stood in the face of more partisan elements of his own party to help ensure that a president’s judicial nominees got a fair “up or down” vote in U.S. Senate. The move also at least temporarily helped ensure that then-President Bush nominated more moderate judges.

He’s Got No Time For Trump.

The feud between Trump and McCain started when Trump pathetically mocked McCain’s unshakable record as a war hero. But the split between a man driven by character and principle and a person driven by whatever drives Trump was inevitable. They are polar opposites in nearly every way.

In fact, when Trump was being sworn in as president, McCain visibly spent most of the time hanging out with ... Bernie Sanders.

Trump may end up outliving the Arizona senator but something tells us it’s McCain who will be having the last laugh.

He Helped Save Obamacare, Despite Not Being A Fan Of It.

During Trump’s first year in the White House he came very close to repealing Obamacare. He had the votes from a Republican-controlled House. But over in the Senate, McCain dramatically refused to support the repeal measure, leading to a humiliating defeat for Trump and even McCain’s fellow Republicans who had promised for years to repeal the healthcare law once they took back control of the White House.

He was also very human, including making plenty of mistakes.

McCain has plenty of critics and they aren’t all named “Donald Trump.” He’s freely admitted to having a checkered past. After all, it was his involvement in the “Keating Five” banking scandal that served as the catalyst for his larger legacy of campaign finance reform and getting “pork barrel spending” out of politics.

He also wasn’t perfect in his personal life.

And there are those who now scoff at the notion of McCain being a “maverick.” This is the same man who picked Sarah Palin to be his vice presidential running mate, despite having a personal preference to pick then Sen. Joe Lieberman (Ind-CT), which would have been a far more independent, brave, and exciting move.

Still, even some of his biggest critics and former rivals are giving tribute to the man and his legacy.

I very much do not agree with the politics of John McCain. But he defended Obama against racists. He was the decid… https://t.co/ZFaLmBzOrg
— Mikel Jollett (@Mikel Jollett)1535127283.0

People on the far left and the far right don’t like McCain. That’s called political courage.

McCain is a hero, warts and all. He spent the majority of his political career building bridges across the political aisle, not destroying them.

His service in Vietnam and his bravery as a POW are reason alone to honor his legacy. But his bravery and humanity years later in helping to heal the wounds with a country he fought against is a true testament to leadership and honor.

We’ll never know what McCain would have been like as president. But we got decades of him in the public life and our country is a little more American in the best sense because of it.

The 40-day fasting period of Ramadan observed by Muslims around the world is a both an individual and communal observance. For the individual, it's a time to grow closer to God through sacrifice and detachment from physical desires. For the community, it's a time to gather in joy and fellowship at sunset, breaking bread together after abstaining from food and drink since sunrise.