It's a homophobic message on a bathroom wall. But then it gets better. And then ... oh snap.

Homophobic jokes? Gross. Sadly, it's pretty standard bathroom graffiti fare. But I doubt anyone expected the dialogue that followed. 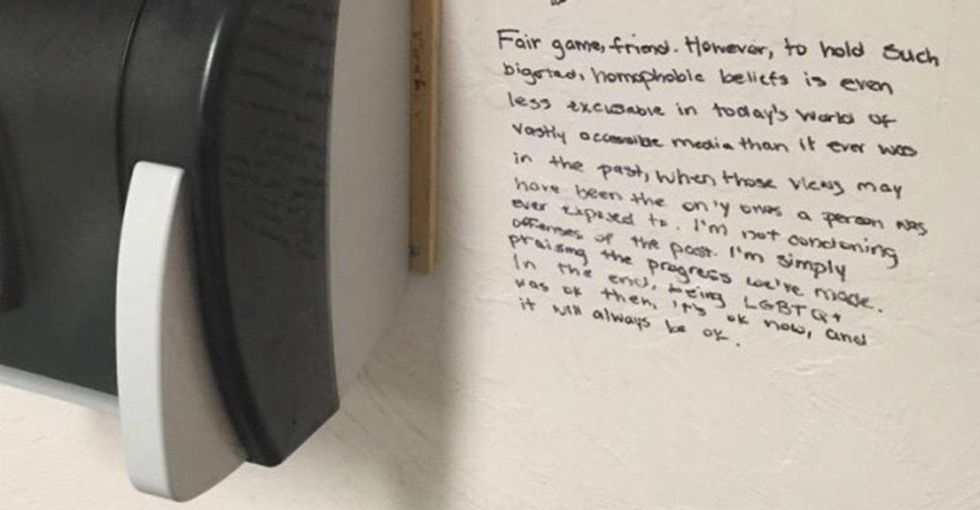 A Florida high school student shared a photo of this exchange on a campus bathroom wall.

If you've ever used a public bathroom, chances are you've seen your fair share of phone numbers, crude jokes, and graffiti scribbled on walls. But I doubt you've seen this sort of lengthy progressive discussion.

When a student at Dreyfoos School of the Arts in Florida shared this on Twitter, it went viral for good reason. Admittedly, the conversation's a little tough to follow (and hard to read), so I made you a handy key that breaks down it down. Check it out:

4. Student B: "Fair game, friend. However, to hold such bigoted, homophobic beliefs is even less excusable in today's world of vastly accessible media than it ever was in the past, when those views may have been the only ones a person was ever exposed to. I'm not condoning offenses of the past. I'm simply praising the progress we've made. In the end, being LGBTQ+ was OK then, it's OK now, and it will always be OK."

Now that's what I call a mic drop.

I love this exchange for a few different reasons. First, full disclosure: I graduated from Dreyfoos School of the Arts in 2002. So of course this makes me especially proud. I'll never forget my first day on campus seeing people with tattoos and brightly colored hair, and *gasp* two girls kissing. Seeing different types of people embracing themselves and being accepted by others was extremely eye-opening for 14-year-old me. That's because diversity of all kinds is a win for everyone because it not only promotes self-esteem but also encourages acceptance and tolerance.

But while the Palm Beach Post reporter remarked, "Only at Dreyfoos," it's not just at Dreyfoos. Not by a long shot. All over the country, young people are standing up for equality and championing the rights of LGBTQ+ folks. In 2013, Cassidy Lynn Campbell became America's first openly transgender homecoming queen, high schools around the country host Gay Straight Alliance clubs, and charities like the Trevor Project have partnered with schools to help create safe spaces for LGBTQ+ youth.

This exchange is important because when people promote harmful ideas about others, we need to use our voices to educate — even if it happens on a bathroom wall. While it took a minute to get there, the sentiment shared by both students is the same: "In the end, being LGBTQ+ was OK then, it's OK now, and it will always be OK."