Instead of running for President, billionaire Michael Bloomberg commits to shutting down coal plants and moving U.S. to clean energy ASAP. 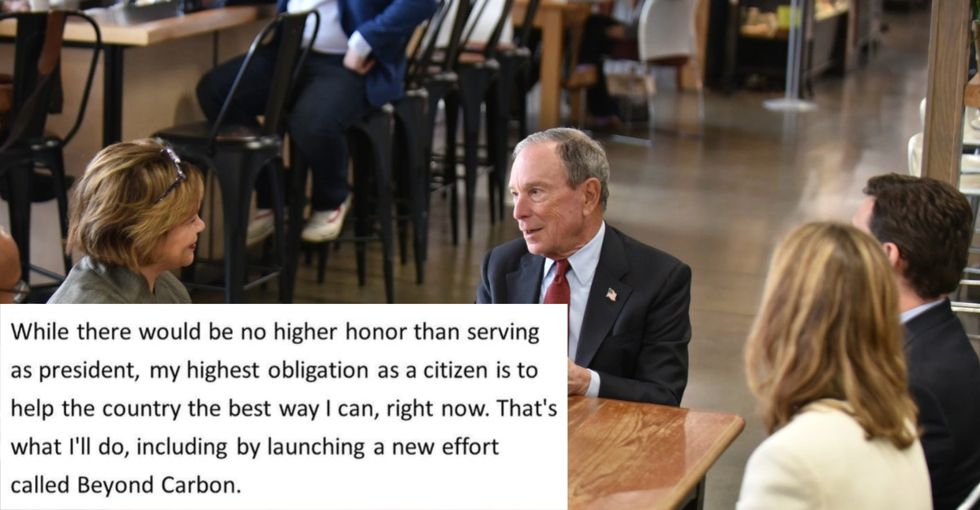 Michael Bloomberg has been all over the news lately due to his potential presidential candidacy, however that’s far from his primary focus. Instead, he’s decided to put his attentions toward improving clean energy over the next 11 years.

He intends to accomplish this through a project he refers to as ‘the ‘Beyond Carbon’ initiative - a grassroots effort to move as fast as possible away from oil and gas and towards total clean energy. The initiative admirably aims to close all coal-fired power plants by 2030.

"While there would be no higher honor than serving as president, my highest obligation as a citizen is to help the country the best way I can, right now. That's what I'll do, including the launch of a new effort called Beyond Carbon," the entrepreneur, philanthropist, and three term mayor tweeted.

While there would be no higher honor than serving as president, my highest obligation as a citizen is to help the c… https://t.co/yutNo2KuPs
— Mike Bloomberg (@Mike Bloomberg)1551819788.0

The statement he published (which can be viewed on bloomberg.com) addresses the suggestions he run for president, the realism he sees in the struggle to get the Democratic nomination, and most importantly the understated, bipartisan importance of upping the anti in America’s fight to curtail climate change.

And he’s already taken several steps to combat that long before the 2020 presidential candidacy was a twinkle in anyone’s eye.

Since 2011, the billionaire turned climate Advocate has worked with Sierra Club to close many of the coal-fired plants and replace them with cleaner energy. His results speak for themselves.

“By organizing and mobilizing communities affected by the harmful pollution of coal-fired power plants, we have helped close more than half the nation’s plants — 285 out of 530 — and replaced them with cleaner and cheaper energy. That was the single biggest reason the U.S. has been able to reduce its carbon footprint by 11 percent — and cut deaths from coal power plants from 13,000 to 3,000,” wrote Bloomberg.

The progress Bloomberg’s seen so far plays an undeniable role in his decision to distance himself from talking and focus on action.

“Should I devote the next two years to talking about my ideas and record, knowing that I might never win the Democratic nomination? Or should I spend the next two years doubling down on the work that I am already leading and funding, and that I know can produce real and beneficial results for the country, right now?”

Scientists, and the Environmental Protection Agency say that we likely have only 50 to 75 years before the effects of climate change get much more intolerable. Bloomberg is one of many who believes we have to make big moves to change that projection NOW.

“Mother Nature does not wait on our political calendar, and neither can we,” he warned.

Is Bloomberg still considering a 2020, presidential run? Possibly. But what he's expressed thus far makes it clear that everything comes second to climate and environmental concerns.

We need more people in positions of power like him to prioritize saving our planet. Without bipartisan efforts, it will be difficult to make major movement happen. Hopefully many more, regardless of how they lean, will realize this issue far outweighs any political power play and follow suit.