Instead of cashing his bonus, this college president gave it to local families and students.

In fact, President Ono has never accepted his annual bonus at the University of Cincinnati. 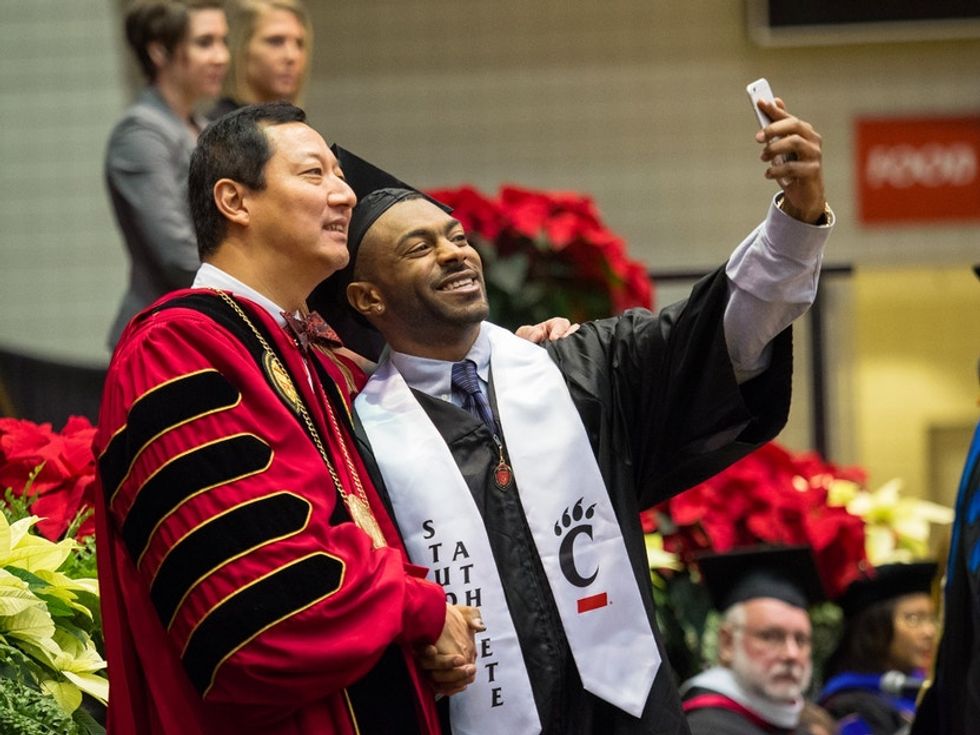 Santa Ono is like the Santa Claus of college presidents.

Not like in a jolly old guy kind of way. And not just because he can rock quite the festive bow tie or snap selfies with students dressed in a red robe. (Look below! How cute is that?)

Ono being adorable and taking selfies at graduation in 2014. Image via University of Cincinnati, used with permission.

For the third year in a row, Ono gave away his six-figure bonus to those who could use it more than he does.

While he was at it, he also turned down a raise — yet again.

His bonus at the University of Cincinnati was $200,000 this year — two hundred thousand freaking bucks that will now go toward awesome, worthwhile causes.

Like a university initiative that supports first-generation students. Like a local agency that helps families in need. Like the school's LGBTQ Center, 10 student scholarships, and workshops for young musicians (and so much more!).

He's also giving $10,000 to the family of Sonny Kim — a Cincinnati police officer who was recently killed on duty.

It's nice to see a university president give back when, nationally, his peers' paychecks have risen sky high, alongside tuition costs.

The figure might be a tough pill for a college student to swallow, seeing as since 2007 the average annual tuition at a four-year public school has spiked 29%. If you do the math, that's $2,068 more than what those crazy college kids were paying just eight years ago!

That's why Ono's gifts have been a big deal.

They're helping students, families, and marginalized groups in Cincinnati who could use a hand up.

"We've learned that the way to satisfy President Ono is to give him the ability to help others," Board President Tom Humes said. "We heartily endorse his decision."

He's been given so much — in life and in bonuses — and he's giving A LOT of it back. I love it.