In 1 tweet, J.K. Rowling captured the media's hypocrisy in how it treats Syrian refugees. 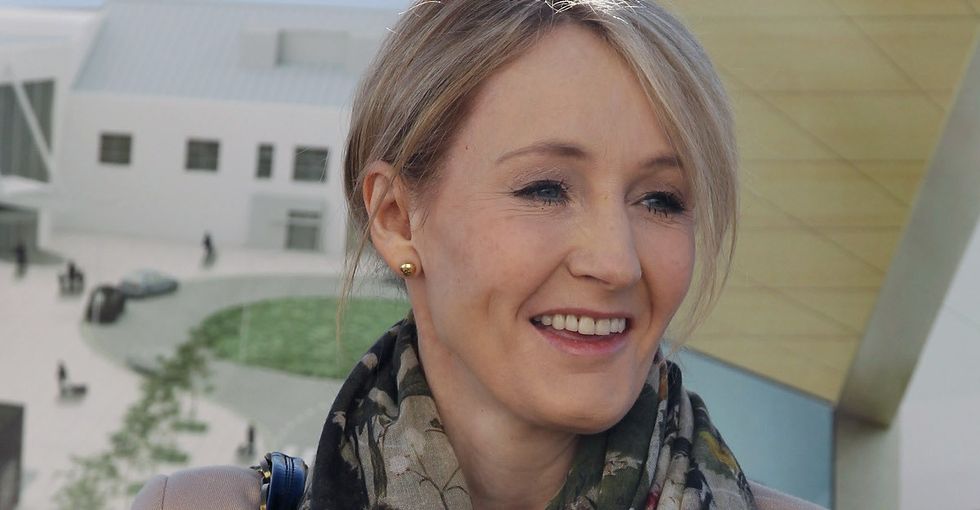 J.K. Rowling is heartsick over how the thousands of Middle Eastern refugees flooding into Europe are being treated.

So when The Daily Express published an article about the major humanitarian crisis on the bottom of their front page, Rowling took them to task.

Specifically, for the prominent placement of a different story about a dog looking for a home.

There are many unsheltered animals that need loving homes, and it's completely understandable — and admirable — to feel for them and want them to be safe.

And dogs are, without a doubt, very cute.

But the tweet reflects a growing frustration that, while one dog needing a home is sad, there are thousands of people who need homes — and not enough is being done about it.

Scenes like this one in Hungary, where thousands of refugees stuck on sweltering train cars were denied passage to Germany, and this one (warning, graphic images), where authorities found the body of a drowned toddler washed up on a Turkish beach, have become all-too-common across the continent.

There is hope, however. In some countries, people are taking matters into their own hands.

According to a New York Times report, when the Icelandic government pledged to take in only 50 refugees in 2015, a group of Icelanders called on the government to permit 4,950 more to enter the country. They wrote on Facebook:

“Refugees are our future spouses, best friends, our next soul mate, the drummer in our children's band, our next colleague, Miss Iceland 2022, the carpenter who finally fixes our bathroom, the chef in the cafeteria, the fireman, the hacker and the television host. People who we'll never be able to say to: 'Your life is worth less than mine.'"

And some towns, like Goslar, Germany, have rolled out the welcome mat for new migrants.

The mayor of Goslar believes the influx of new residents could be a huge boon for his region's economy and cultural life, and he has put out an open invitation for recent arrivals to settle there.

Hopefully, if more people like Rowling speak out, more people around the world will start opening their hearts and their communities to people in need.

We might not all have the same platform that Rowling has, but our combined voices can surely make a difference.

The Syrian migrants can't go back to where they came from. They need new homes and new lives, and it's up to us to help them.

In order to do that, we need to start seeing them not as refugees, but as our potential neighbors.

One dad who decided to go clubbing with his daughter is making our day while having the night out of his life.

Talia Schulhof (aka @taliasc) had to know she had all the makings of a viral-worthy TikTok when she posted:

“My dad wanted to go to a club so here’s how it went.”

If she didn’t know before, the now 10 million views are a sure indicator. People are loving this adorably wholesome video.