Important lessons we can learn from 10 kids' New Year's resolutions. 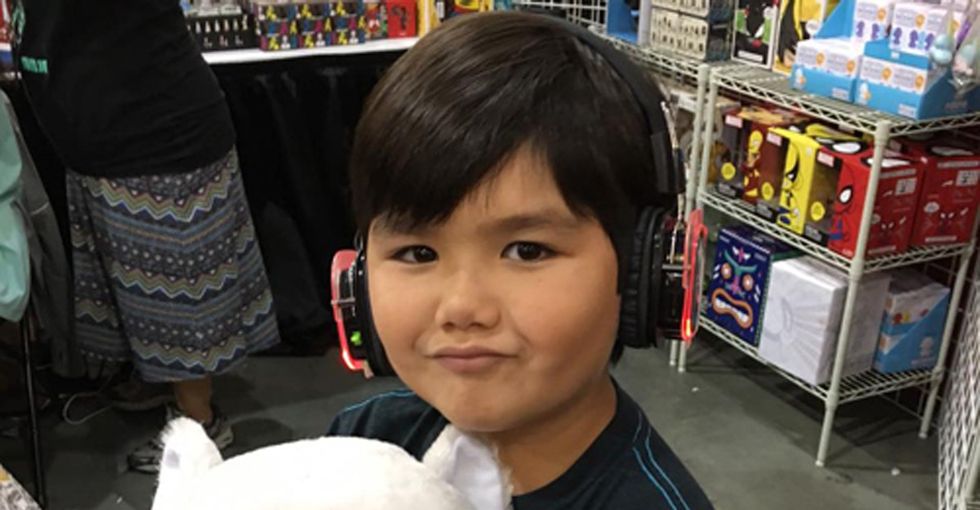 We tend to really do that at certain times, like at the new year. We can feel pressure — self-inflicted or from others around us — to make big New Year's resolutions and lofty goals for life changes.

But kids? They're rational about these things. The balance of their future doesn't hang on a few big goals.

Can you imagine a 7-year-old stressing about losing all the pounds, getting a promotion, and never getting behind on laundry — all over the course of one year?

To help us approach New Year's resolutions more like kids do, I asked a few kids (through their parents) what resolutions they planned to make.

1. It's all about happiness for kids.

9-year-old Frankie feels that the new year is about happiness — and a new plot, of course. While I can't be 100% certain what he meant by a "new plot," I have a good idea. And I think we could take a page out of that book for approaching the new year if the last one wasn't the best. A fresh start — let's do this!

Additionally, in the new year, he'd like to "help other people do better," which is pretty much the most noble goal ever. What if our New Year's resolutions centered around being nice to others?

(His adorable 6-year-old sister Harper was like, "I don't even know." In this case, I think ignorance is totally bliss.)

4-year-old Xander Lucien is all about it in the new year.

"I got it! I got it!" he excitedly exclaimed. "For myself, I want to give my toys to another person." Heart = melted.

3. There's nothing wrong with some practicality.

4-year-old Finley is well-educated when it comes to calendars. Because of a song he learned in preschool about the earth traveling around the sun in 365 days, he totally gets the concept of a year.

When his mom Kelli asked him about what he wants to accomplish in 2016, he had some plans. "I want to learn how to cook better, I want to use better listening ears so I can have dessert, I want to make new friends, I want to do more yard work, and I want to play outside and eat snow," he said.

The best part? They're all plans to make him happier. I mean, who isn't happier after having more dessert and making new friends?!

5. Some kids balance practical self-improvement with doing some good.

I asked my daughter Molley, age 7, what her resolutions were. After she asked what a resolution is and I explained, she looked at me kinda funny and said, "Oh, I want to learn to do the splits. I'm also going to raise money to help animals that need homes or are sick. Those aren't resolutions, though. I was just planning on doing that anyway. But you can call them resolutions if you'd like." I'm on board with that approach — regular old plans, less pressure.

6. Some kids balance practical goals with the reality of being a kid.

Asher, age 9, has priorities. When his mom asked him about his New Year's resolutions, he had two: "To slow down when I take tests so I don't make careless mistakes. Oh, and to fart more at the table." Reasonable goals if you ask me.

7. Some kids are having literally none of it.

8-year-old Boo didn't know what resolutions were, but once she found out, she wasn't having any of it. Here's how the conversation with her mom went:

[Her mom explained resolutions and the goals of self-improvement.]

Boo: "I think you missed the part before when I said I'm only 8. I'm too young to have regrets. And every day I'm alive I get a chance to be a better version of myself. I'm not going to wait until the new year to start. That's stupid."

Can I get an amen? (And how can I learn to be as insightful as an 8-year-old?)

8. Other kids really do have important stuff goin' on that requires their attention.

"[Max] and his friends are designing Mario LEGO sets together at recess," his mom told me of her 7-year-old son and his friends. "They have defined an area of the playground as their 'office' so they can have meetings and plan. Apparently that's different than playing."

I was thinking, future CEO maybe? And then she shared his New Year's resolution and I was like, future CEO definitely.

"I think I should do more meetings for my Super Mario 3D World LEGO design group," Max said. "I keep canceling them so I can go play instead. And maybe see The Force Awakens a hundred more times."

Props to Max for reminding us in the midst of all this "chill out about resolutions" talk that there is nothing wrong with ambition. But also, we gotta balance it with some leisure time.

9. Kids do what they want to do, not what they think they should do.

9-year-old Josie's resolution was the best reminder that maybe we should make goals to do more of what we enjoy instead of what we feel like we should do.

10. At the end of the day, kids are all about the real talk.

Gigi Faith, 12, is about as realistic as one can get when it comes to resolutions. "I make New Year's resolutions but I never keep them — I don't think anybody does," she said. "You might say, 'I'm going to eat healthier or I'm going to be better about getting my homework done' and maybe you do for a week. After that, nope!"

Basically, whether we make big resolutions, small resolutions, or skip them altogether, the key to happiness, according to kids, seems simple: Do more of what makes us happy — and that includes not making any resolutions if we don't want to and letting go of the ones that don't work out, guilt-free.