If you're freaking out about the election, these 7 things might give you hope. 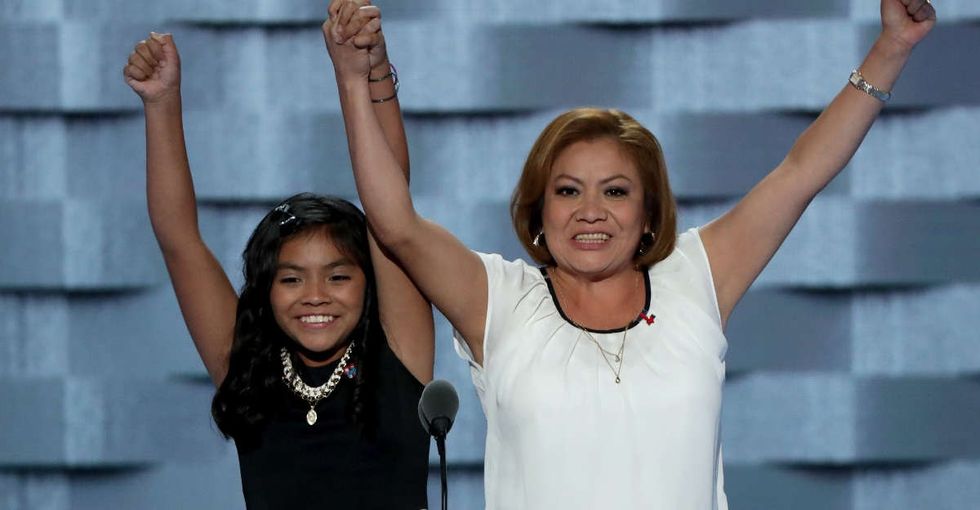 The conventions are over, and I'm still worried. I suspect I'm not alone.

I'm a pretty simple guy. My needs are basic. I like walking in the park and taking naps. I like being able to say whatever I want and practice my religion without fear of harassment or prosecution. I appreciate when my black, brown, female, and LGBTQ friends and family members have basic civil rights. I want my country to be safe and respected in the world.

Unfortunately, that's all in jeopardy. Because this guy...

...who has a well-documented history of bigotry against Mexicans and Muslims, who wants to transform NATO into a mafia protection racket, who plays footsie with white supremacists, who deploys anti-Semitic dog whistles, who publicly dehumanizes women, who voices hostility toward the First Amendment's protections of freedom of speech and religion, and who calls on a foreign government to hack his opponent's emails, could be our next president.

And the polls have gotten closer. Too close for comfort. Trump could actually win this thing.

Hope, believe it or not, floats.

If you're as appalled as I am that Donald (freaking) Trump could be the leader of the free world come November, there are a few things that still make me optimistic that he never, ever will be:

I'm hanging on to these things for dear life. I hope they help.

1. The current polling — which shows Trump pulling into a tie — isn't necessarily how things are going to shake out in November.

Despite Trump's recent gains, as of July 29, FiveThirtyEight's "Polls Plus" forecast, which takes into account current polling and adjusts for historical trends, finds a 60% chance of the former "Apprentice" host going down in November.

According to Josh Katz and Kevin Quealy of the New York Times, the period surrounding the party conventions is one of "high polling volatility," and averages taken around this time tend to miss final result by nearly 8 percentage points. Trump, just off his vice presidential rollout and convention, is likely enjoying a similar bump to what both Mitt Romney and John McCain experienced four and eight years ago, respectively.

Still, even a 40% chance of Trump becoming president is way too high...

2. Which is why we should be grateful that Michelle Obama is such a boss that not even Trump will step to her.

You know that scene in a movie where the good guys are getting their asses kicked, and they're all huddled together in a room, and one of them says: "We're outnumbered. We don't have a chance." But then Samuel L. Jackson says, "Yes, we do." And he opens a closet door to reveal a huge, futuristic bazooka as warm, celestial light spills out from behind it?

That's basically what happened when Michelle Obama spoke at the first night of the 2016 DNC.

You've already seen the highlights. You know how good she was.

She was so good that Trump, not one to shrink from a third-grade Twitter insult — who, indeed, tweeted attacks against nearly every other speaker on the stage that night — didn't dare deploy a comeback against the first lady.

For the next three and a half months, we have that bazooka in our arsenal.

I feel pretty good about that.

3. Karla Ortiz bravely took the stage at the DNC with her undocumented mother and challenged us all to do something about immigration reform.

What was the bravest thing you did recently? For me, it was yesterday when the deli I stopped at for lunch was out of regular Diet Coke, so I drank the caffeine-free kind instead.

For Karla Ortiz, an 11-year-old from Florida who likes doing science experiments and searching for rare rocks, it was risking her family's safety and security to call out Donald Trump's racist immigration policy in front of millions of people.

Karla Ortiz and her mother. Photo by Alex Wong/Getty Images.

"I don't feel brave every day. On most days, I'm scared," Ortiz said, proudly making everyone in the audience feel ashamed for complaining about the lack of detachable hangers in their hotel rooms just a few hours earlier.

"I'm scared that, at any moment, my mom and my dad will be forced to leave. And I wonder, 'What if I come home and find it empty?'" she said, ironically revealing that her guts are made of goddamn iron.

She said these things on TV, in full view of thousands of political foes of immigration reform, violent racists, and immigration authorities. The risk she took is scarily real, especially if Trump becomes president.

But she did it anyway. Because it's just that important.

If she can do that, the least we can do is tell our bosses we need to take a long lunch on Nov. 8 to go vote him the hell out of all our lives forever.

He's also no one's idea of a left-wing fire-breather. He was a Republican mayor of New York City and is now a zealous independent.

In his speech at the 2016 DNC, he criticized both parties. But ultimately, he really stuck it to Trump, delivering, perhaps, the best one-liner of the week:

Ultimately, to defeat Trump, there just needs to be a constituency for sanity and competence. That's a low bar.

And I believe we can leap it with room to spare.

5. Ted Cruz pointedly refused to endorse Trump at his own convention, an inspiring move in its own right.

If there's one politician who I hope stays nearly as far away from the White House as Donald Trump, it's Ted Cruz. Pick 10 issues at random and Ted Cruz and I probably disagree on 11 of them. I think his program for America would make pretty much everything worse. Profoundly worse.

Thing is, Ted Cruz, for all his many faults, actually respects the Constitution. And in his speech at the RNC, Cruz refused, over a chorus of jeers, to endorse Trump.

"Vote your conscience," he said.

Whether it was revenge for Trump spending the last days of the GOP primary attacking Cruz's wife's mental health and suggesting with absolutely no evidence that Cruz's father might have helped assassinate John F. Kennedy, or simply an attempt to stand up for Cruz's (admittedly pretty messed-up) principles, it was invigorating and, yes, even inspiring.

Self-serving or not, if someone I disagree so intensely and so completely with can refuse to get behind Trump, it gives me hope that thousands (millions?) more like him are out there.

6. The stage at the DNC looked like the real America, not the "real America."

For years, politicians have sold us a story of a "real America." There are good things about this America — small businesses have a steady stream of customers there, the bunting is festive, and the desserts are really, ridiculously sweet. But ultimately, it seems to be an America that's pretty exclusively white, pretty exclusively Christian, and pretty exclusively rural — and occasionally suburban.

At the DNC, we saw a different — but just as real — America. That America includes:

Dozens of black, Latino, LGBTQ, and female officeholders from big cities and small towns across the country.

A Muslim-American father, who spoke eloquently and emotionally about the death of his U.S. soldier son — and defended the Constitution against Trump's call to place an immigration ban on an entire religion.

The first out trans woman to speak at a party convention.

And, of course, the first woman ever nominated to run on a major party ticket for president, which — whether or not you agree with her politics or like her as a person — is still a pretty huge deal.

That America isn't a story. It's real.

If it can hang together, then this thing should be in the bag.

7. Even though democracy can be scary — OK, terrifying — at times, it's still pretty great.

As bad as things seem, as horrifyingly close Donald Trump might be to the White House, the fact that we get to watch passionate people spend two weeks in July arguing via speeches, original songs, and funny hats about who would be a better president — and then actually getting to choose which one we like best — is pretty inspiring.

...who on the third night of the DNC showed up to deliver a rousing defense of democracy.

He shouldn't even have to say it, but he's right.

You can disagree with this person's thoughts on the Second Amendment:

Or with these people's feelings about Citizens United:

But that doesn't matter even a little bit if you don't vote.

And in America, we still have the right to choose.

This November, let's make sure we use it to fire Donald Trump.