If it feels weird to have to force your kid to hug their relatives, there's a reason.

It's your little inner voice saying, 'There is another way.' 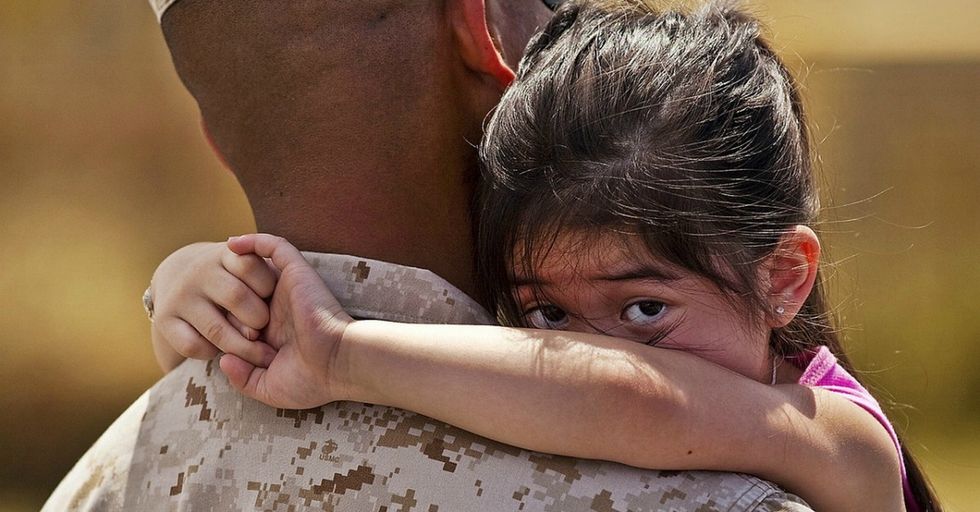 Lots of parents know this scenario.

The in-laws get in after long travels for the holidays, and the first thing they want when they walk in the door are hugs and kisses from their darling grandbabies.

Except when the kids aren't feeling like freely giving affection. What happens next?

"Please don't make me give hugs!" Image by Capture Queen/Flickr.

We parents sometimes cave to the societal pressure to show off a kid we know to be loving and affectionate, even when they aren't particularly in a mood to be those things.

Sometimes in the moment during family get-togethers, we pressure them to show physical affection when they just aren't up to it. If you've been there before and had that nagging feeling afterward, it's OK to learn from that and do it differently next time.

The whole hugging-relatives thing can seem complicated, but I'm going to break it down. First, with some reasons why forcing our kids to be that person is a bad idea. Second, with why we get confused for a moment and think it's a good idea. And third, with some middle-ground solutions that balance diplomacy with your child's feelings.

1. It's a bad idea to force snuggly-wugglies that aren't genuine because:

To begin with, the bond between you and your child has got to be first and foremost.

Whether it's trusting you enough to come tell you mistakes that they've made or knowing beyond a shadow of a doubt that you are on their side if someone ever violates their trust, it's crucial for your kids to never doubt your allegiance. So when you force Isabelle to hug people who she's telling you she doesn't feel like hugging, it kind of sends a subtle but lasting message that you care more about being on Team Grandma or Team New Stranger than being on Team Isabelle.

Additionally, forcing kids to give physical affection they aren't feeling tells them to ignore their own feelings to appease others.

A certain amount of rising to the occasion is a good skill to learn, but not at the expense of physical comfort and psychological well-being. While YOU may know that Grandma is harmless, it's less about the actual inherent risk and more about the practice of teaching your children that their boundaries matter and will be recognized. A child who learns early on that their "no" means something is an empowered child. It's not going to turn them into a spoiled brat just because they get to decide who they want to demonstrate physical affection with. There are other ways to raise a balanced child than insisting they give up bodily autonomy.

Peter Saunders, chief executive of the U.K.-based National Association for People Abused in Childhood, reinforces this point in The Guardian:

"There are certain things we [should] make children do which is quite different. We make them brush their teeth, for example. That is quite different to forcing them to kiss an uncle they don't want to. It's about boundaries. And this blurring of boundaries [by forcing them to kiss someone they don't want to] can indeed blur their understanding of what is right and wrong, about their body belonging to them."

2. Why it seemed like a good idea at the time to push the kids to hug their family:

In the moment, when Granddad's feelings are hurt because his kiss got rejected, it can seem like a good idea to cajole your child into acquiescing.

We want the world to see our children in their best light, as we see them — the cuddly, adorable, and loving little creatures they can be. We want the world to see we've raised well-adjusted, outgoing, socially successful beings. We don't want family members to feel rejected or embarrassed. We don't want our kids thought of as brats. All of those feelings and competing objectives are real, but none of them trumps the facts that you are your child's teammate and they get to make the final call on what they do with their body. Those are still the most important things in such a situation.

It's always better when kids are giving hugs because they want to, anyway! Image by Brent Payne/Flickr.

3. It doesn't have to be a choice between making your kids hug people or letting them be rude.

There are plenty of other hug-diplomacy options in between.

The bottom line: Relax about it (which will help everyone else follow suit), and make sure your kid knows you have their back even as you work your role as chief manners-enforcer. If millions of parents did this, imagine the healthy boundary-setting skills of the next generation!