If aliens exist, this moon is where we'll probably find them. 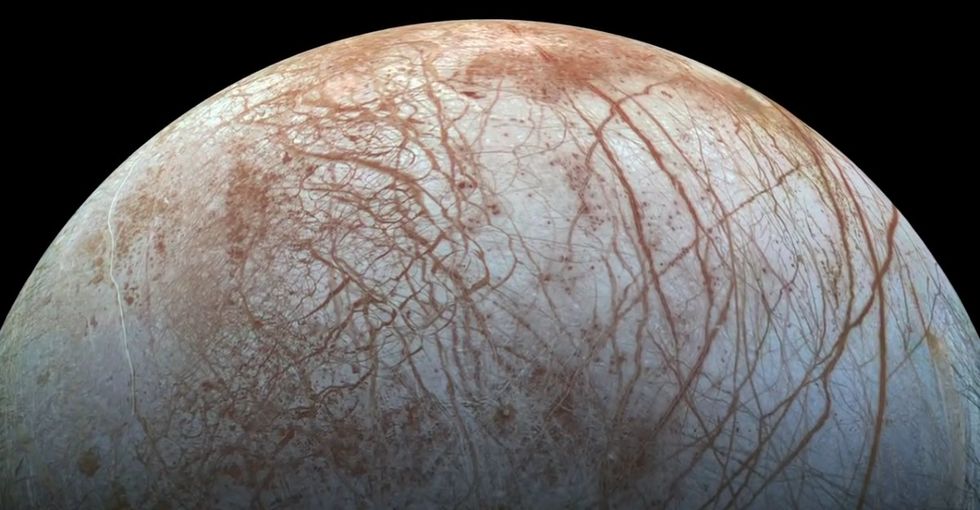 NASA is making plans to send a probe to Europa — one of Jupiter's more than 60 moons — and you wanna know why we should all be excited about this?

There's a chance (probably a good one) they're gonna find aliens there.

He's not mad, he's just excited about so much science happening. GIF from "Star Wars: A New Hope."

Seriously, Europa's ocean is huge. Even though Earth is more than four times larger in diameter than Europa, it is estimated that Europa has more than twice as much ocean water.

High in the atmosphere? Check. Buried under miles of rock? Is there water? Then there's life! There's even bacteria inside nuclear waste disposal dumps!

So, if there is liquid water under Europa's icy surface, it is extremely likely that there are signs of life below.

OK, yes, we know, we know — if the entire moon is covered in ice, then how is that alien life getting energy? Doesn't it need sunlight?

And that's very astute of you to wonder — but here's your answer: On Earth, deep-sea vents are capable of powering entire alien ecosystems.

Yes, Europa's icy surface probably means the oceans are completely dark, and yes, most food chains on Earth are based around the sun, but let us introduce you to our little friend: the hydrothermal vent.

On Earth, these vents exist deep under the ocean where sunlight never penetrates. Instead the life around them gets its energy from the superheated water and chemicals that erupt up from vents.

Europa is constantly being squeezed by Jupiter's gravity like an giant stress ball, which means it probably has an active, molten core just like Earth's.

An artist's impression of Europa's surface, with Jupiter visible in the background. Image via NASA/JPL-Caltech.

A molten core means vents, and vents may mean life. In fact, there's even a theory that suggests life on Earth first developed around similar vents on Earth!

To find out if there is life under Europa's icy surface, scientists are sending a probe into orbit around Jupiter that will also make close passes by Europa.

The surface of Europa. Image from NASA/JPL-Caltech/SETI Institute.

This will give the probe a chance to examine the moon, using tools like radar and spectrometers to learn more about its geology, it's stress-ball relationship with Jupiter, and what kinds of processes might be going on under the ice.

Images from the Hubble Telescope hint that giant plumes of water sometimes blast out of Europa's ocean like geysers, shooting some of its ocean water high into space.

The scientists are planning to add a bunch of robot tongues — essentially — to the front of their spacecraft and send it diving through the spray from these geysers to "taste" all that water and see what kinds of chemicals or possible lifeforms it can detect.

If there are aliens to be found, it's likely we'd find some trace of them on Europa. Meaning this mission could be the single biggest scientific discovery ever.

OK, so if they do find aliens, they're probably not going to look as pretty as Spock...

In fact, they'll probably look more like bacteria or algae. But alien algae would be totally cool too – because anything we find down there that's alive would totally revolutionize our concept of life in the universe. If life is so common that it could arise twice around a single star, then imagine what an entire galaxy's worth of planets and moons and stars could look like.

And even if they don't find any aliens, this mission is still worth celebrating because it's an awesome chance for us to explore our solar system and learn more about the universe we live in.

Watch NASA's animation about their mission to Europa below. And get excited! This could be the first step to finding aliens — real aliens — in our lifetime.