How I learned to love my body as a female athlete.

Society can no longer tell me what is and isn’t beautiful. 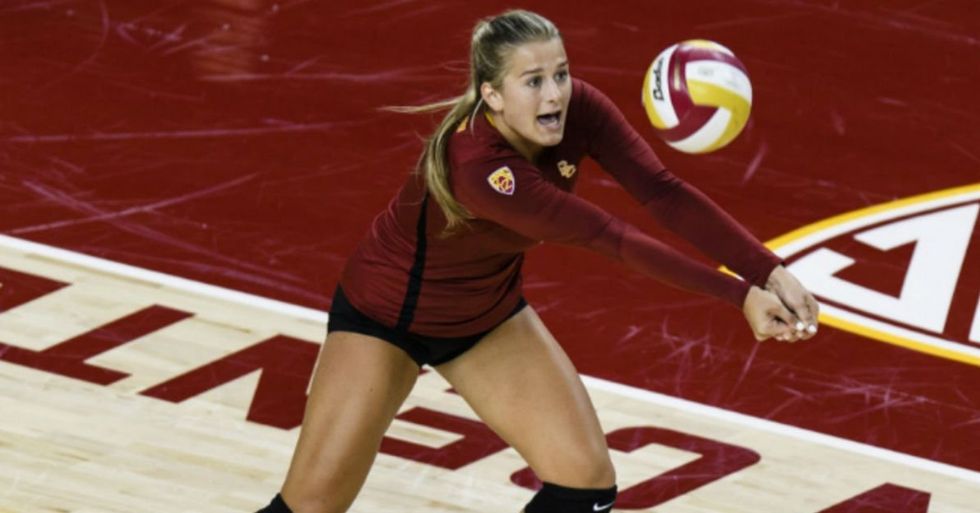 Editor’s note: To help celebrate National Girls & Women in Sports Day, we asked University of Southern California athlete Victoria Garrick for her take on being a female athlete in 2017.

For so long, society has told women how we are supposed to act: Poised. Sweet. Quiet.

For so long, society has told women how we are supposed to be: Gentle. Delicate. Soft.

For so long, society has told women how we are supposed to look: Skinny. Sexy. Beautiful.

For so long, society never told women that we could be strong.

Graduating high school, I was a lean girl, happy with my appearance. Of course, I had fallen victim to believing in society’s standards a couple of times and maybe read too many tabloid magazines, but overall I was content with myself. This changed when I became a college athlete.

When I committed to the USC women’s indoor volleyball team, I was overjoyed at the opportunity and prepared to learn, but I was not prepared for the significant changes my body was about to endure. After I started lifting and practicing with a Division I team, my body began to change quickly before my eyes. All of a sudden, I was burning close to 1,300 calories a practice, lifting heavy weights, and eating around 4,000 calories each day. This was a huge change from the routine I had grown accustomed to in high school.

After just a few months of this regimen, I was no longer that lean girl. I was bigger and I was muscular. However, I didn’t pay much attention to it until one particular weekend my freshman season.

Excited to have the day off, I went shopping. I wanted to buy something that would make me feel girly and pretty, because sweating in a gym every day and max-squatting 220 pounds isn’t girly and pretty, right? After grabbing a pile of clothes to try on, I headed into a changing room not knowing that the next 10 minutes would turn me against myself. The first pair of jeans wouldn’t pull past my thighs. The next shirt I tried was too tight on my arms. The dress I loved on the mannequin wasn’t zipping up my back. Piece after piece, nothing fit. I wondered anxiously, “Is it me? Is this marked wrong?!” As I squeezed out of the dress, my eyes welled with tears. After a few more attempts to make anything work, I could no longer hold in my emotions. Behind the curtains of a 5-by-5-foot changing room, I silently began to cry.

"I could sprint 100 meters in 14.60 seconds. I could single-leg squat 130 pounds, and I could hold a plank for four minutes. All of this still means I’m feminine."

I spent the rest of that year attempting different diets, avoiding certain outfits, and despising the athletic lifts I had to do every day in practice. For countless months, I was focusing on my body, trying to be skinnier, and trying to eat less than what my body required to perform.

However, after two semesters enduring this misery, I finally realized something that all female athletes must come to on their own: There is nothing wrong with my body.

I had a firm stomach. My legs were rock solid. And my arms were defined. I could sprint 100 meters in 14.60 seconds. I could single-leg squat 130 pounds, and I could hold a plank for four minutes. All of this didn’t make me any less feminine.

I was still that healthy-looking girl, but now I had the build of an athlete. What I hadn't understood in the dressing room was that I was strong. I didn’t know that strong was something I could be. From that point on, my outlook changed. Just because you are not a certain dress size or weigh more than 120 pounds does not mean you’re not beautiful. Just because your body needs to consume 4,000 calories a day does not mean you are fat.

And, most importantly, girls who compete to win the national championship will not, and physically cannot, look the same as models clouding our Instagram feeds. So, as a female athlete playing volleyball for the University of Southern California, I finally realized what it meant to be a beautiful woman. And to my pleasure, it was nothing that society had told me to be.