How Evan Rachel Wood uses her story to clear up misconceptions about being bisexual.

Her powerful story shows the importance of accepting each other. 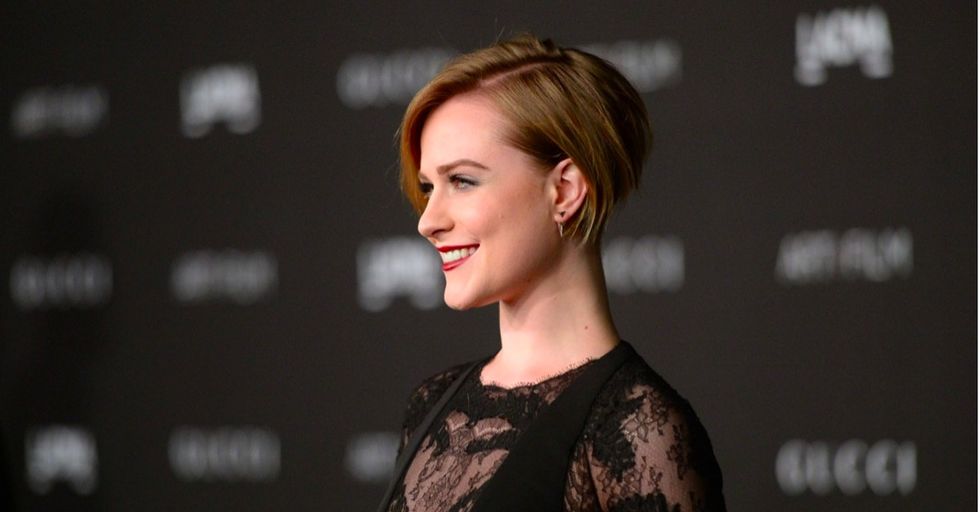 When 12-year-old Evan Rachel Wood's longtime crush — a girl — finally kissed her, she wasn't happy. Instead, she was mortified.

Wood, now an actress and outspoken activist, said she immediately ran away. She felt anxious and weighed down by her feelings of confusion. It wasn't because she didn't like the girl — she'd had a crush on her for a while — but she, like many tweens, was afraid of being different.

She tried to turn to her mom for support but was too overcome with shame to tell her. She didn't try again for another 10 years.

Wood said those feelings of shame characterize a large part of her journey as a young bisexual woman and were detrimental to her mental health.

In a conversation on Twitter, Wood said the confusion around her sexual identity led to a lot of self-loathing and depression.

Wood's experience isn't unique. Bisexual women have been found to have lower levels of social support, and reports show that bisexual adults are two times more likely to be depressed.

When she did come out in her early 20s, the stigma surrounding bisexuality made things difficult.

She thought that coming out would solve a lot of her problems. And while she's glad she made the decision, she encountered a lot of bi-phobia and misinformation. People just didn't understand her sexual orientation.

"When I got into my early 20s I came to terms with things, put on a brave face and set out to explore this side of myself," Wood explained to me over Twitter. "I identified as bisexual, came out to both my parents and it seemed everything should fall into place. But it didn't."

Wood says she's a lot happier now that she's out and proud. But she knows coming out isn't an easy decision.

"I am out. It took guts. It took years of soul searching and self exploration. It took not always getting it right in relationships," said Wood. "But I know who I am and I am so much happier and I want other people to know that it's not a phase."

Wood was inspired to tweet last week after reading the Human Rights Campaign's latest report, "Health Disparities Among Bisexual People," which explores the effects of the discrimination many bisexual people face. Namely, that many people don't think bisexuality exists as its own orientation. But it does, and bisexual people have their own needs that must be addressed.

Now, Wood is using her experience and platform to battle misconceptions and normalize the bisexual identity.

And these are the truths Wood wants everyone to know about being bisexual:

1. Bisexual people are, statistically, the biggest subgroup in the LGBTQ community.

We often only hear "gay or lesbian" when talking about the LGBTQ community. In fact, the B in LGBTQ is the most common identity in the community (and the T and Q often get left off altogether, although there's been increased awareness around trans issues lately). Studies have shown that nearly half of people who identity as lesbian, gay, or bisexual fall into the latter category.

2. Being bisexual is its own separate identity. It isn't indecision or a refusal to "take a side."

Bisexuality isn't "just a phase" — it's a lifelong orientation for many people, including Wood. She knew her entire life that she was bisexual, she said, explaining that for as long as she can remember, "as far back as 5 years old," she's been attracted to men and women.

3. When a bisexual person is in a relationship with someone of a different gender, that doesn't mean they stopped being bisexual.

Once upon a time, Wood was married to a man, and she even has a child with him, but that doesn't make her straight. And it wouldn't make her a lesbian if she were in a relationship with a woman. Sexual orientation is about what gender(s) you're attracted to, not who you happen to be with at any particular moment in time.

4. Most importantly: We have nothing to lose by accepting bisexual people for who they are. But we have so much to gain.

Wood's story and the HRC report show that accepting bisexual people and not doubting their identity can help them live happier and healthier lives. Of course we want everyone to get the acceptance and love they deserve, and that means it's time for us to start recognizing bisexual individuals.

Wood knows the pain of not being accepted for who she is, and she doesn't want anyone else to have to suffer in silence like she did.

So how do we do that? Wood says it's simple: Just listen and accept people for who they are.

In conclusion, take it away, Beyoncé: