How a deaf dog became an agility champ with a little love and a lot of creativity. 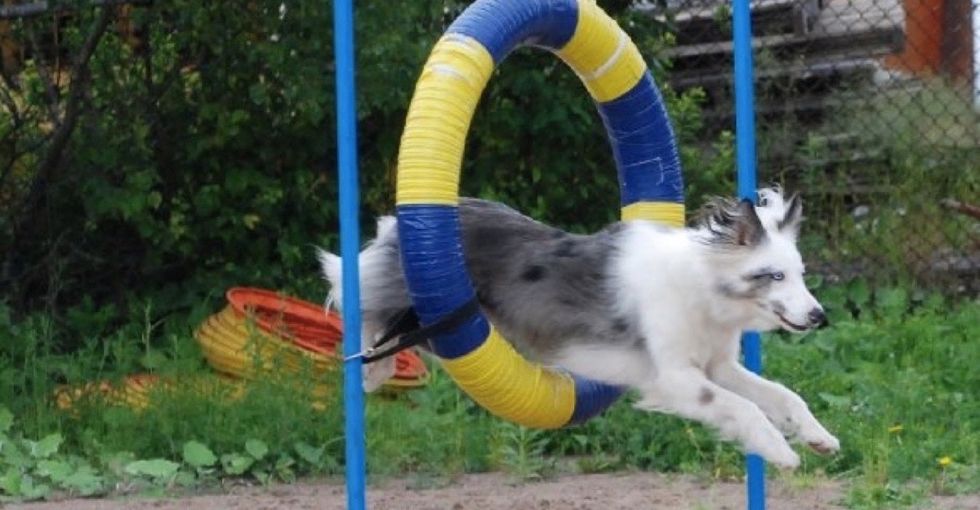 Meet Seven. She's an adorable dog whose original owners gave her up after learning that she was deaf.

When Adina MacRae heard this, she made it her personal goal to prove to the world that her dog could do anything a hearing dog could do.

Adina rescued now-9-year-old Seven when she was three months old. She saw potential in the endearing pup, and boy was she right.

Earlier this month, Seven earned an Agility Trial Champion of Canada title — an amazing feat for any dog, but especially impressive for a pooch that is deaf.

Seven can't rely on whistles or finger snaps for training, so she and Adina had to develop a body language of their own. In order to even be considered for this title, Seven had to win every other title at the starter, advanced, and masters levels of competitive agility. It's taken years and many, many training sessions. She's put in some serious work!

Coincidentally, her name is Seven and this big moment came exactly seven years and one day after her first agility qualifying score.

Watch the agility champ in action showcasing some of the obstacles she had to master:

She can jump hurdles.

All GIFs via The Canadian Press.

She weaves through poles.

She balances herself on a teeter-totter.

And she makes her way through tunnels.

Adina says Seven's inability to hear actually made her easier to train because there were fewer distractions.

Seven mostly relies on hand gestures. Her favorite is the thumbs-up because it lets her know she did a good job. More importantly, it means she's getting a treat.

Now that she's won this big award, Seven will most likely retire from her agility career. Seven is 9 now, so Adina knew the window of opportunity was closing for her to win this challenge. And they do say it's better to go out when you're on top.

Adina hopes Seven's story encourages more people to consider rescuing pets with disabilities and to think big about what they're capable of.

"Seven is a special dog to me because she taught me the value of communicating with dogs on their terms instead of using spoken word. This has helped me be more in tune to dogs and what they are trying to tell us," Adina said.

On that note, congrats, Seven! You proved your former owners wrong by not only being good enough, but being the best.

Thanks for reminding us that many of our limits can be overcome with lots of effort and a little bit of extra love.