His neighborhood’s known for violence. So he’s helping young filmmakers give it a new rep. 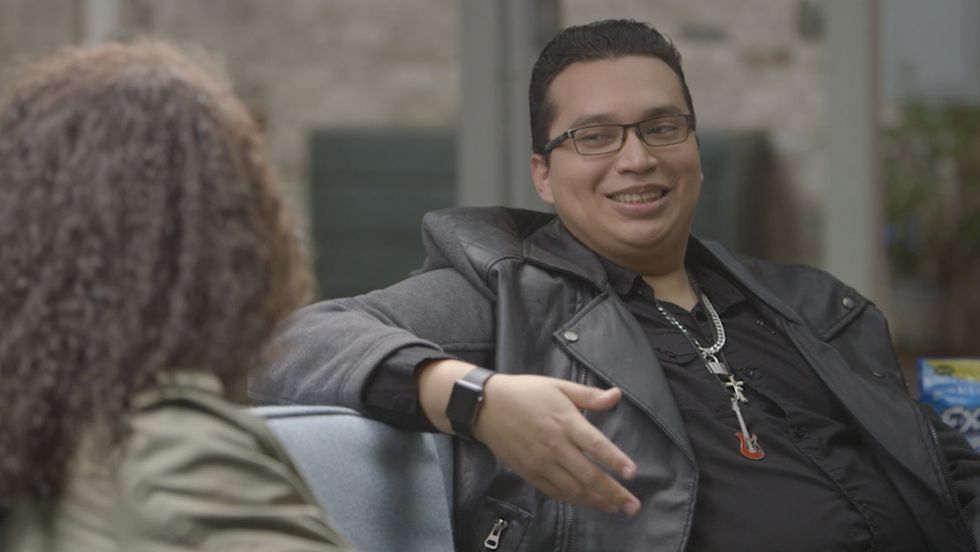 As a kid, Ruben Garcia might not have imagined he could become the musician and audio engineer he is today.

That’s because Garcia grew up in Watts, an area of South Los Angeles known for high rates of poverty and violence. In his neighborhood, kids didn’t get opportunities to explore the possibilities of audio engineering because they lived in a community that lacked resources for sometimes even the most basic needs.

South L.A. also has lower high school graduation rates than the rest of the city, and high school dropouts are more likely to be unemployed and imprisoned. Research also shows that because of high rates of health problems, homicide, and suicide, South L.A. residents have shorter lifespans than residents in other parts of the city.

Garcia at work as an audio engineer. All images via Extra.

Without the right support, a kid like Garcia growing up in South L.A. wouldn't focus on much more than survival.

That's why Garcia says he was "blessed" to connect with Better Youth, a nonprofit that would change the course of his life.

He participated in several Better Youth programs, which include media training and partnering with mentors in film, audio, and music industries. They even provide professional certification to help mentees get a leg up in their industry of choice.

But it wasn't just the events and programs that made an impression on Garcia. It was how the organization went above and beyond to make sure he had what he needed to participate.

"I'd say, 'Well, I don't have any money' or 'I don't have a ride,'" he says. And then Better Youth staff would mobilize to get him to the event location in some way — such as by sending a ride or carpooling.

Such gestures made him feel cared about, built up his confidence, and helped him persevere through hard times, which, in turn, got him to high school graduation and into college.

"It really inspired me because I felt like, wow, these guys will do anything to help me," he says.

Garcia gained hope for possibilities he'd never considered before. At Better Youth, he learned that people cared about his future and that, with his new skills in music and engineering, it was possible for him to thrive.

As an adult, Garcia wanted to continue the cycle by giving back to others like him, so he became the information and technology director of a Better Youth program called Real to Reel.

Real to Reel is an international film festival that's entirely for youth. Young filmmakers submit creative films from locations all around the world — including, of course, South L.A.

Part of the red carpet at the Real to Reel film festival.

As they learn skills in filmmaking and compose their festival submissions, the Real to Reel youth get to express themselves and raise awareness about issues that matter to them, such as foster care, homelessness, and race relations.

They also get to walk the red carpet at Hollywood's L.A. Film School and rub elbows with special guests and film industry insiders, like past guests Bill Duke and Melvin Jackson Jr.

As the information and technology director, Garcia says he's the guy everyone calls when something tech-related goes wrong — and he's happy to get things up and running again. But for young people who wouldn't otherwise be able to afford such opportunities, help with technology isn't just a matter of fixing equipment. Garcia also acts as a role model, an example of someone who pushed through difficult circumstances to thrive as an expert in his field.

Garcia recognizes it's not just the "big things" that make a difference. But that's not the only reason he's committed to sharing the smaller moments of kindness.

He was in a horrific car accident in college, which caused a brain injury that affected some of his memory. He eventually got it back, but he first had to slow down and take time to recuperate. It gave him a chance to reflect, and the whole experience made him even more grateful for life’s little moments that show how people care, even when times are rough.

"It makes you appreciate the life you already had because you almost lost it," he says. "It kinda makes you re-evaluate things. … I'm still here, what now?"

In reflecting on his journey, he says he's realized what a difference someone simply offering a ride, an invitation to lunch, or a welcoming greeting made to him.

"Sometimes, it's that one small thing that can flip a person a complete 180," he says. And now, he's committed to being the person who creates those meaningful moments for someone else.

For more about Garcia's work with youth, check out this video:

Finding opportunity growing up in an at-risk community can be difficult, which is why strong mentors can make a huge impact.