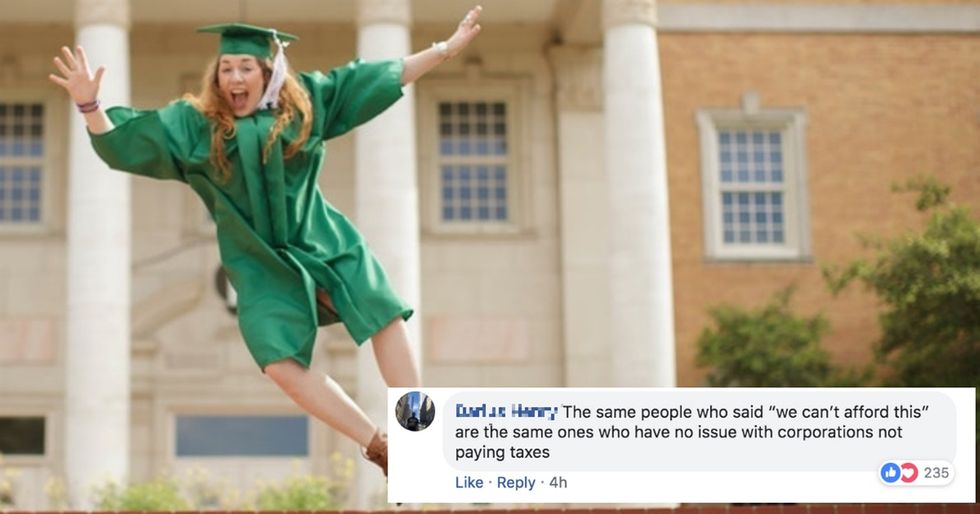 There are two things that most of us can reasonably agree on:

So what do we do? Some cities, including San Francisco, have already made their community colleges free for residents. But that's just one small step towards a future where education's affordable for everyone.

On Monday, presidential hopeful Elizabeth Warren released a memo on how the college system could be altered to make it achievable for all.

Warren's proposing that more college be free and that federal Pell grants be expanded. She's also suggesting that student loan debts should be wiped out, ensuring that future generations get a leg up on their futures.

"As states have invested less per-student at community colleges and public four-year colleges, the schools themselves have raised tuition and fees to make up the gap," Warren wrote in a post on Medium.

"And rather than stepping in to hold states accountable, or to pick up more of the tab and keep costs reasonable, the federal government went with a third option: pushing families that can’t afford to pay the outrageous costs of higher education towards taking out loans."

The result, Warren points out is "a huge student loan debt burden that’s crushing millions of families and acting as an anchor on our economy."

"It’s reducing home ownership rates. It’s leading fewer people to start businesses. It’s forcing students to drop out of school before getting a degree. It’s a problem for all of us."

Those whose incomes are higher than $250,000 would continue paying off student loans without changes. However, as Huffington Post notes, the proposed plan would help 42 million people in The United States. That's 95% of anyone who's attended or is currently attending college.

Warren's plan also includes a significant amount of money being invested in historically black colleges and universities, more diversity in two and four-year colleges, and an end to the government-helping fund for-profit colleges, which prey on economically disadvantaged communities.

The policy sounds great — more students attaining college degrees while being allowed more control over their financial futures — but it's going to be a tall order to implement right now.

Aside from hand-wringing concern trolls who are already out in full force on Twitter, demanding to know why anyone would go to a college they can't afford (while ignoring that higher education has become so expensive that even state schools are out of reach for many), there's the very real issue of convincing voters that the $1.25 trillion the program would cost over ten years is viable.

Warren believes it would be possible by raising the tax on families that earn more than $50 million a year, something that might also ruffle some feathers during the next election cycle.

Still — a population that's educated and not overwhelmed with debt? That sounds pretty good no matter who you voted for in the last election.