Her boyfriend asked her to draw a comic about their relationship. Hilarity ensued. 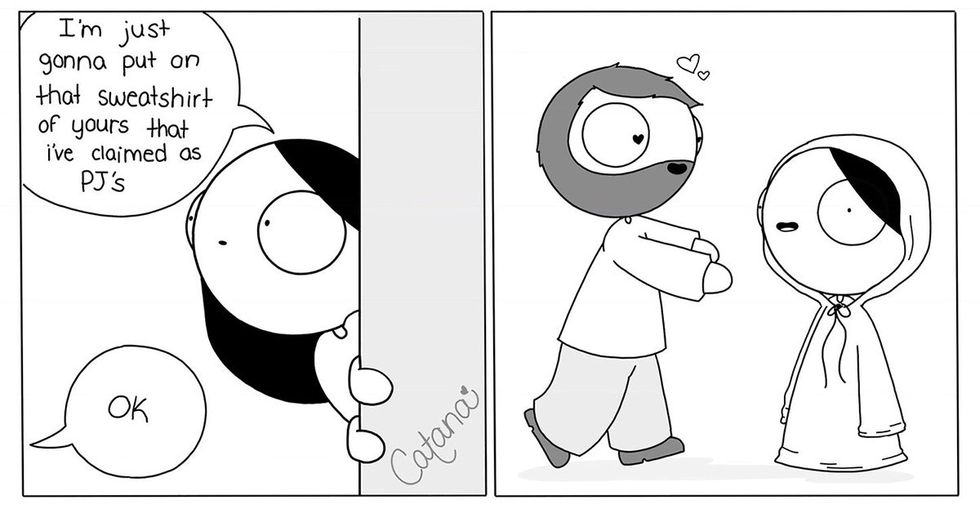 An offhand suggestion from her boyfriend of two years coupled with her own lifelong love of comic strips like "Calvin and Hobbes" and "Get Fuzzy" gave 22-year-old Catana Chetwynd the push she needed to start drawing an illustrated series about long-term relationships.

Specifically, her own relationship.

The drawings are refreshingly touching, honest, and instantly recognizable to anyone who's ever had to learn to live with, for, and around a long-term partner.

Chetwynd says her goal is to explore the peculiar aspects of relationships at different stages, using her own as the master template.

The series combines humor and playful drawings with spot-on depictions of the intense familiarity that long-standing coupledom often brings.

The comics are almost too real — and really, really funny.

If the following comics capture your relationship to a T, you're most definitely not alone.

All images by Catana Chetwynd.

"When I started doing the comic, we hadn’t lived together or anything yet, and now we’ve done the whole thing of moving in together and meeting the parents and everything," Chetwynd says.

The evolution of their relationship provides the creative fuel for the comic strip. Thankfully, her boyfriend John Freed is fully on board with being depicted in (digital) ink — despite having to occasionally awkwardly explain things that appear in the strip to their family and friends.

The connection she has built with Freed, Chetwynd says she wouldn't trade for anything — especially now that it inspires her art.

"The end goal for me was always to have somebody that I could be comfortable with in this way, and I think I got that."