Heartwarming comics show how one dad feels about raising his little girl.

This artwork shows how beautiful fatherhood truly is. 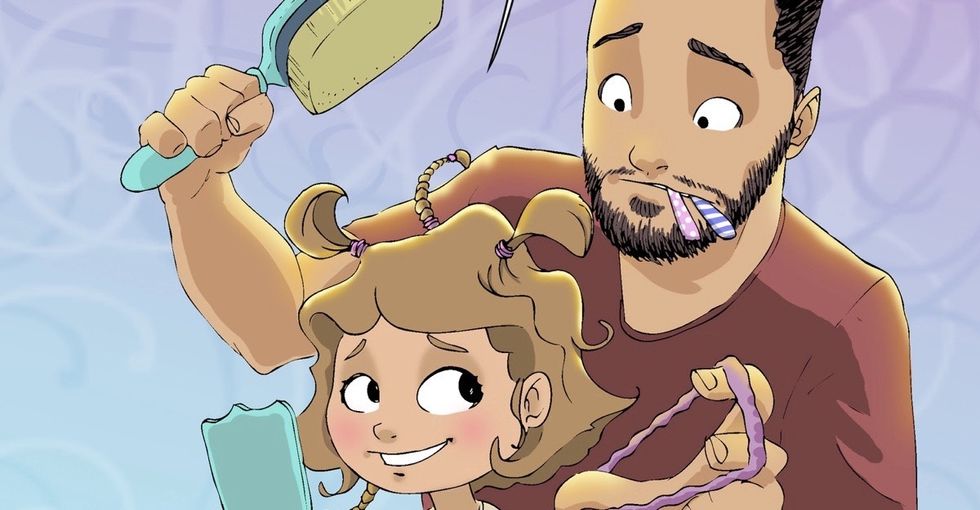 Ever since Yannick Vicente was a kid, he enjoyed doodling and creating art. But where he started is much different from where he is now.

Vicente lives in France and works as an artist, and he's a pretty good one. "I love art and have drawn for as long as I can remember," Vicente told Upworthy. "I basically taught myself."

A lot of what he learned ended up on the walls of buildings as graffiti. He probably would've continued down that path until one moment changed his life in 2011: He became a father to a beautiful little girl.

Vicente enjoying some love from his young daughter. Photo from Thomas O'Brien Photography, used with permission.

"I wanted to create art that my daughter would be proud of," Vicente said. "And that's why I changed my focus."

As a single dad, Vicente became passionate about fathers raising their kids, so he used his skills as an illustrator to show the dad-child bond.

And he's come a long way in five years.

First, he illustrated a children's book.

When Vicente got an opportunity to showcase his work on a larger scale — an offer to illustrate a book for kids — he jumped all over it.

"It was such an honor to work with an established author like Fabienne Blanchut," Vicente said. "I knew it was the start of something special."

As he got more comfortable with his new style, he created more great father-child illustrations for people to enjoy.

Vicente created this particular piece for a dad who happens to be a big fan of his art.

"It means so much to me when people ask me to illustrate something for them," he said. "It shows that they value my work."

To their kids, dads have amazing superpowers. All illustrations are originals from Yannick Vicente and used with permission.

Finally, he took his skills to another level by illustrating the relationship that means the most to him: the one he has with his 4-year-old daughter.

"My daughter means the world to me and I put my whole heart into any illustration that she happens to be in," Vicente said. "I had to evolve my work to match my passion."

Just by looking at some of his work, you know he's telling the truth.

Sometimes it's the all-too-familiar struggle with styling his daughter's hair.

Other times, it's getting blindsided by the tough questions.

More often than not, it's recognizing the immense power his daughter has over him, even if she doesn't know it yet.

But it's always about letting his daughter know that she is his whole world.

Although Vicente just recently started creating illustrations of him with his daughter, many people love his work.

"I've received some wonderful messages from dads who are in a difficult situation after a divorce or separation, and they tell me how much I inspire them," he said. "But it's really wonderful that moms find my pictures inspiring as well. I want to touch as many lives as possible."

And what does his daughter think of her daddy's artwork?

"She's young, but she likes the work I do," he said. "For her birthday, I offered drawings to the invited children, and that made her so proud."

I think a lot of people are proud of your work, my man. Thank you for using your art to show how beautiful fatherhood really is.