He was looking at a life sentence. Now he's giving others a second chance. 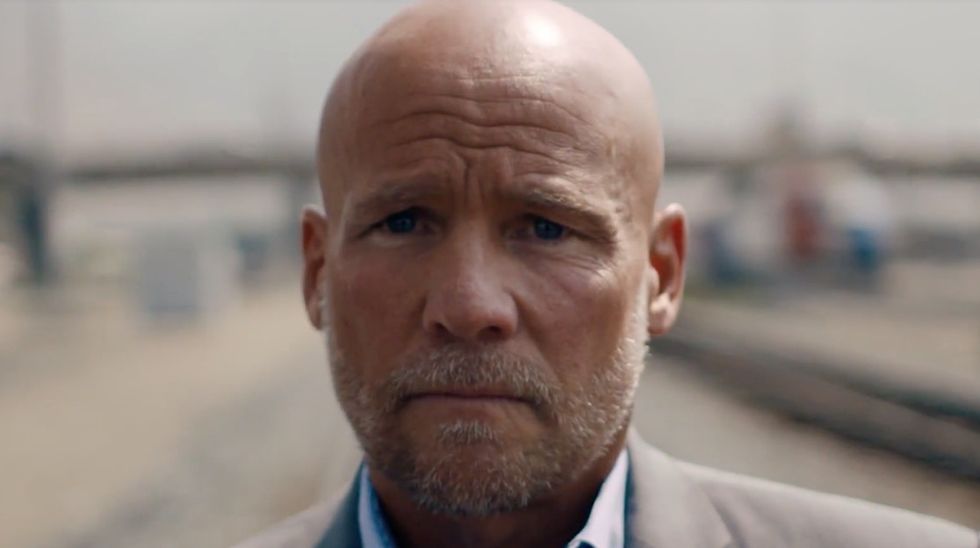 At 38 years old, Dave Durocher was looking at a life sentence.

Dave Durocher. All images in this post by Upworthy and Stand Together.

He was a self-professed corruptor who'd ruined people's lives. As a high-level drug dealer, he'd already spent years in prison. After completing a two-year sentence, he immediately went back to selling drugs then was arrested again. He did a five-year prison sentence that time. Then a six-year sentence. Then a 10-year sentence. Four consecutive prison sentences.

His was the story you hear about and would think - “people like that will never change." And based on Dave's pattern of behavior, you'd be right. Being incarcerated had become a way of life for Dave. So, he decided he was going to make a name for himself on the inside." He'd always be at the top of the food chain. He'd always be calling the shots.

Unfortunately, the mentality of survival at all costs, fueled by hate worked against him. It made him more venomous which, in turn, made life in prison even more unbearable.

“Prison is a hate factory..." Dave said. “It's like high school with knives."

After completing his 10-year sentence Dave promised himself he'd never live behind bars again. But that didn't mean he was planning on changing his ways. Without an alteration in habits, mindset, or behavior, he had no plan to live a crime-free life once he got out - it was what he knew - and what he was good at. So, unfortunately, he went right back to dealing drugs shortly after being released.

The same habits and behaviors he'd mastered through crime, deceit and manipulation were still there and hadn't changed. His pattern of behavior caught up to him again.

As the police closed in on him during a high-speed chase, Dave attempted to take his own life - knowing if caught, he would spend the rest of his life in prison, a place he'd promised himself he would never go back to.

He failed and was arrested yet again, which was his breaking point. Dave knew deep-down that he wanted more out of life than this revolving door of crime, death, and hate. But up to this point, he hadn't been able to break his own destructive cycle. Why would anyone give him another chance? He didn't deserve one.

He wanted to change, but didn't know how to take that first step.

“When someone is ready to change their life and says, 'I need to do something different, but I need help?' Where do you send them?" Dave said.

Faced with a life sentence (another 29 years) Dave begged for leniency in court. He'd heard about an innovative program for individuals just like him, and pleaded with the judge to be sent there as a last chance to change his life.

The judge heard his pleas and gave him a once in a lifetime opportunity to attend the program. If Dave was able to complete it, he would not have to return to prison.

"Plead guilty for all charges and I'm going to send you to Delancey Street," Dave remembers the judge saying. "If you get kicked out, I've got you for the rest of your life."

Dave couldn't take the deal fast enough. But he also quickly learned that Delancey Street, a long-term (minimum of two years) peer-to-peer life-skills and vocational training program with a focus on social responsibility, wasn't going to be easy. At first, he started sliding back into his old ways of communicating — being arrogant, pompous, giving in to his ego and encouraging others around him to slip back into negative behaviors.

One day, Dave exploded at his program leader, telling the man that he'd never get what it was like to have served time.

That was a moment he'll never forget. It helped him realize he wanted to help others, too.

Dave was mandated to stay at Delancey Street for two years. He voluntarily stayed for eight, and ran Delancey's Los Angeles facility as its Managing Director for the last 5 years of his stay.

Today, Dave is the managing director of The Other Side Academy, another long-term residential training center similar to Delancey Street that helps people exiting prison, or recovering from a substance use disorder, completely transform their lives and reconnect with their communities.

Dave's past embodies the sobering rate of recidivism in America. Through his own experience he knew that the programs for people who had been convicted weren't working. 30, 60, and 90-day programs aren't enough to create wholly impactful change. With recidivism as high as 70 percent (or more) among those released from prison, Dave knew that people were leaving those programs and going right back to a life of crime.

So, in 2015, when he became the Managing Director of The Other Side Academy, he vowed to change that.

The focus of the program isn't just about abstinence from substance use — which Dave calls the easy part — it involves a complete change in character and behavior. The staff helps the program participants develop integrity and accountability through work and intense peer-feedback as they run the social enterprises that generate the revenue to support the operational costs of the program.

So far, the methodology is working.

Thanks to constant peer-to-peer feedback, the opportunity to stay in the facility long-term, and a focus on underlying behavior change, within its first three years of operation, 98 percent of the program's participants have not re-offended.

The Other Side Academy doesn't take any money from outside sources — the program generates it through business enterprises they've created in-house and through partnerships with nonprofits like Stand Together.

Stand Together is an organization that seeks to break the cycle of poverty in America by developing and investing in innovative solutions that target problems at the community level. The Other Side Academy participated in Stand Together's Catalyst Program in 2018, which provides business management training and helps social entrepreneurs develop a vision for growth based on their core capabilities and partners with them to increase their impact.

Today, Stand Together is helping The Other Side Academy expand to serve more individuals in their comprehensive and immersive program by investing to help them purchase a new 160-room facility, which will enable them to grow their programming, serve and employ more individuals, and build new social enterprises.

For Dave, that assistance allows him to give as many people as possible a new lease on life.

“I spent the first half of my life helping people die," he says. "I intend on spending the rest of it helping them live."

To learn more about Dave Durocher and the Other Side Academy, check out the video below:

Stand Together invests in solving the biggest problems facing our nation today in order to unleash the potential in every individual, regardless of their zip code. By supporting social entrepreneurs like Durocher who're close to social issues like recidivism and have developed innovative solutions, the company is helping combat these issues in ways that are working. You can get involved and find a transformative org near you at Standtogetheragainstpoverty.org.

Learn More About Stand Together
Joy