He figured out a way to bring clean, affordable power to people who were off the grid.

A young technician is lighting up the lives of those who don't have electricity. 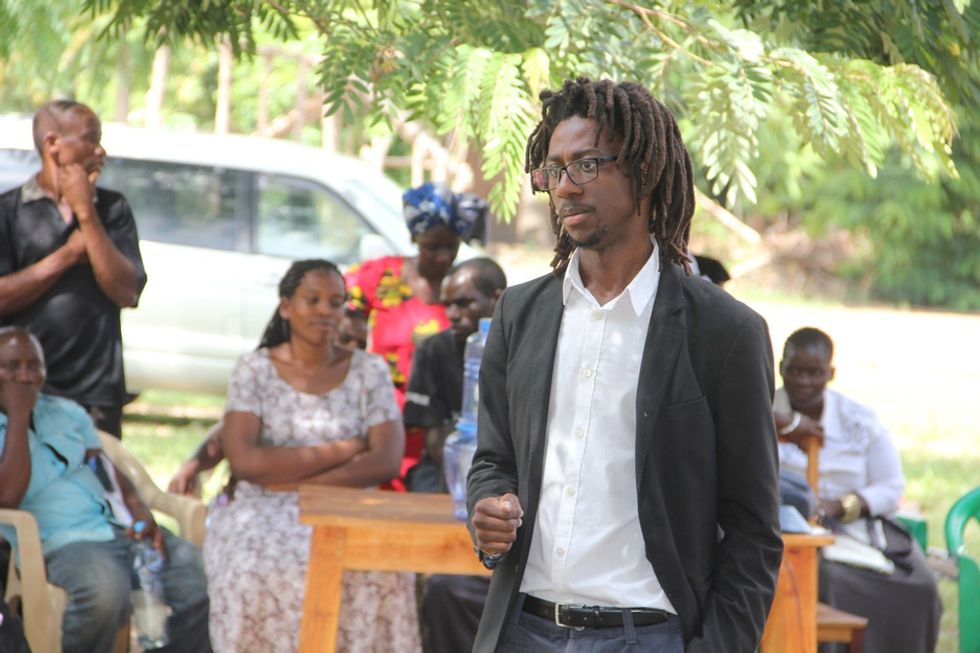 Imagine what the world would look like if industrialized countries had skipped the age of fossil fuels and gone directly to solar power.

Our infrastructure, way of life, and environment would be radically different.

Mtemahanji knows firsthand what it's like to live without electricity.

He grew up studying by kerosene light and going to bed at 8 p.m. (the sun goes down in Tanzania at 6 pm).

"I understand very well the discomfort that people who have no electricity have," he told Upworthy via email. "I was born at night in a clinic without electricity, and so I was born with the light of the moon. My mom always told me that she had to wait [until] the next day to see me, she knew I was born healthy because I weighed nearly 4kg, but she could only see me the next morning. ... I was born and I lived without electricity and I know what it means, for this I decided to use all my knowledge to light up the lives of all those who do not have electricity."

In 2003, Mtemahanji moved to Italy with his mother and became a technician in renewable energy before going to work in Switzerland. By 2014, he’d saved up enough to return to Tanzania, where he started a business with a friend, Manuel Rolando.

The business they started is called SunSweet Solar Limited, and it has the potential to solve three major problems at the same time.

Solar power seemed to Mtemahanji and Rolando like the perfect way to resolve a few different problems simultaneously — (1) bringing electricity to people who needed it, (2) in areas that were mostly poor, and (3) without contributing to climate change.

SunSweet Solar's first contract involved installing a solar power plant at a secondary school that could run 236 lights, dozens of computers, and fans.

The project was challenging, but it was also a success, and Mtemahanji was curious to see how having electricity affected the students.

He wasn't disappointed; he says that since SunSweet Solar's installation last year, national exam performance at Benignis Girls Secondary School increased from 81% to 94%.

Mtemahanji attributes at least some of that success to the introduction of electricity.

"This result shows that studying in a serene environment where electricity is always present, can help a lot to improve the quality of education."

In addition to big projects like the Benignis school, the company sells solar kits and installs larger scale solar systems.

The plan originally was to sell solar kits capable of powering a few lightbulbs and charging a phone to individual households, but SweetSun Solar has since changed its model: nNow they install single solar systems that can satisfy the energy demands of a whole village.

SunSweet Solar customers pay for the solar setup in installments through their phones, and it costs them about $0.13 a day. The government of the village earns 5% of the revenue to assist in the development of the village.

In October 2015, SunSweet Solar was selected as one of the 12 best companies led by young Africans‎ by the Anzisha Prize, an award celebrating young African entrepreneurs.

Since the award, sales have skyrocketed, and SunSweet Solar now faces a new challenge: how to keep up with demand. The company gets requests from about four villages every month, each village with an average of 30 customers/houses. Mtemahanji and Rolando are currently looking for investors so that they can scale up their business.

Mtemahanji says it can be discouraging because it seems like many investors want to work with Western and Asian companies operating in Africa rather than directly with Africans.

"We must be content with the funds that we can have through the seed and prizes. But many of these funds help to support the company, not to scale up. I am confident, however, that this situation will change soon as possible, and we are ready for that moment."