It's important to know your history. 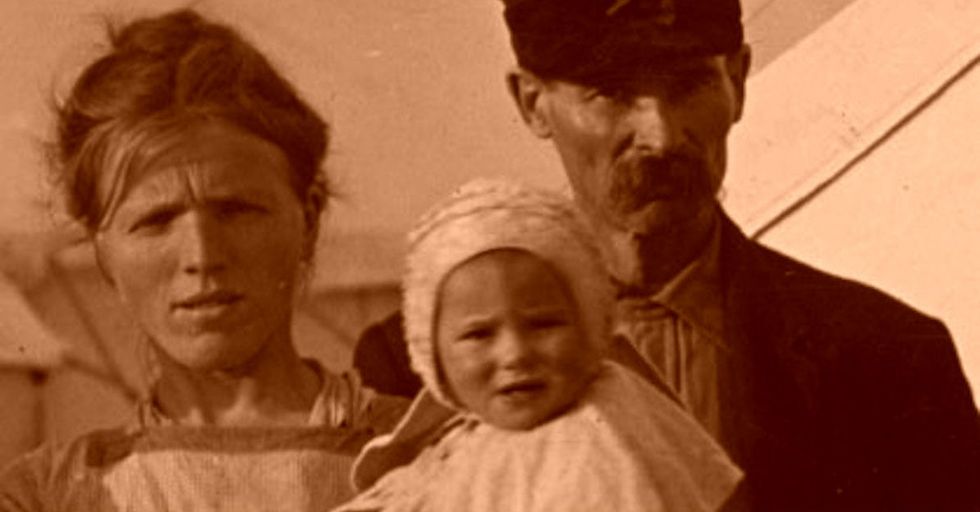 This article originally appeared on 08.14.14

The early 1900s were a time of great social upheaval in our country. During the years leading up to the Ludlow Massacre, miners all around the country looking to make a better life for themselves and their families set up picket lines, organized massive parades and rallies, and even took up arms. Some died.

I've always wondered why history like this was never taught in school when I grew up. Could it be that the powers that be would rather keep this kind of thing under wraps?

Here is Woody Guthrie's tribute to the good people who fought in the battles of Ludlow to help make a better tomorrow for everyone — you can just start the video and then start reading, if you wish:

100 years ago, the Rocky Mountains were the source of a vast supply of coal. At its peak, it employed 16,000 people and accounted for 10% of all employed workers in the state of Colorado. It was dangerous work; in just 1913 alone, the mines claimed the lives of over 100 people. There were laws in place that were supposed to protect workers, but largely, management ignored those, which led to Colorado having double the on-the-job fatality rate of any other mining state.

It was a time of company towns, when all real estate, housing, doctors, and grocery stores were owned by the coal companies themselves, which led to the suppression of dissent as well as overinflated prices and an extreme dependence on the coal companies for everything that made life livable. In some of these, workers couldn't even leave town, and armed guards made sure they didn't. Also, if any miner or his family began to air grievances, they might find themselves evicted and run out of town.

The United Mine Workers of America (UMWA) had been organizing for many years in the area, and this particular company, Colorado Fuel and Iron, was one of the biggest in the West — and was owned by the Rockefeller family, notoriously anti-union.

Put all this together, and it was a powder keg.

The Ludlow Colony before the massacre, 1914.

When a strike was called in 1913, the coal company evicted all the miners from their company homes, and they moved to tent villages on leased land set up by the UMWA. Company-hired guards (aka “goons") and members of the Colorado National Guard would drive by the tent villages and randomly shoot into the tents, leading the strikers to dig holes under their tents and the wooden beams that supported them.

Why did the union call for a strike? The workers wanted:

Cavalry charge on striker women in nearby Trinidad.

Militia and private detectives or mine guards, Ludlow.

The attacks from the goons continued, as did the battles between scabs (strikebreakers) and the miners. It culminated in an attack on April 20, 1914, by company goons and Colorado National Guard soldiers who kidnapped and later killed the main camp leader and some of his fellow miners, and then set the tents in the main camp ablaze with kerosene. As they were engulfed, people inside the tents tried to flee the inferno; many were shot down as they tried to escape. Some also died in the dugouts below the burning tents. In the first photograph below, two women and 11 children died in the fire directly above them. A day that started off with Orthodox Easter celebrations for the families became known as the Ludlow Massacre.

The miners, fresh off the murders of their friends and family members, tried to get President Woodrow Wilson to put a stop to the madness, but he deferred to the governor, who was pretty much in the pocket of the mine companies.

So the miners and those at other tent colonies quickly armed themselves, knowing that many other confrontations were coming. And they went to the mines that were being operated by scabs and forced many of them to close, sometimes setting fire to the buildings. After 10 days of pitched battle and at least 50 dead, the president finally sent in the National Guard, which promptly disarmed both sides.

While close to 200 people died over the course of about 18 months before and after the battles at Ludlow and the union ultimately lost the election, the Ludlow Massacre brought a congressional investigation that led to the beginnings of child-labor laws and an eight-hour workday, among other things.

But it also brought national attention to the plight of these miners and their families, and it showed the resilience and strength that union people could display when they remained united, even in the face of extreme corporate and government violence. Historian Howard Zinn called it "the culminating act of perhaps the most violent struggle between corporate power and laboring men in American history." And the primary mine owner, John D. Rockefeller Jr., received a lot of negative attention and blame for what happened here.

The UMWA is still a solid union today, and there is a monument in Colorado to those who died in the Ludlow Massacre.