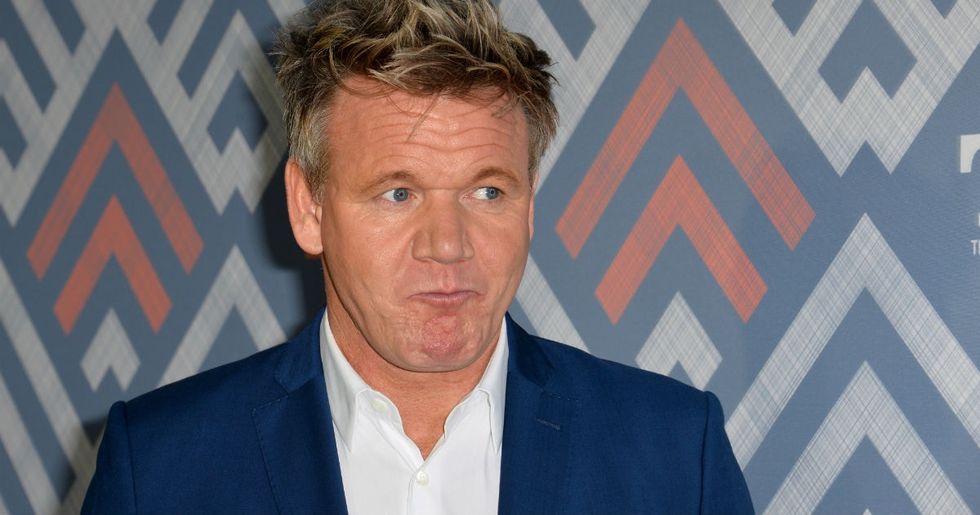 It's been about one full year since men discovered women were people.

Since then, major improvements have been made to the way men are expected to treat women both in the workplace and in their personal lives. It also means that people in the public eye are having to confront past behavior that would never fly today.

The latest display of shameless sexism comes from celebrity chef Gordon Ramsay. While Ramsay became famous for his brazen personality and unchecked anger, a 2010 interview with Jay Leno and Sofía Vergara went too far.

The clip, which resurfaced on Twitter, shows Vergara shouting in Spanish that Ramsay is disrespecting her while swatting Ramsay's persistent hands away from her body.

In the full video, Leno piles on by asking Vergara how much weight she gained, drools over a photo of her in a bikini, criticizes the female director of his show, and does a whole lot of nothing to remedy Vergara's discomfort. While she tries her best to play along and laugh with all of it, it's clear this isn't the way she would like to be interviewed.

Sofia Vergara didn’t deserve to be treated like this. This is very very uncomfortable. https://t.co/5xgxLLFZ8R
— Jason Bolaños (@Jason Bolaños) 1546747081.0

The full clip can be seen here and the interview begins at 1:30.

Note that Ramsay takes absolutely no time to mention Vergara in the bedroom before commenting on how she would "knock herself out" running.

This isn't the first time Ramsay has had to apologize for being degrading to women. A year before the Vergara interview, he insulated Tracy Grimshaw, an Australian TV reporter.

While at a food fair, he showed the audience a photo of a naked woman with a pig's face and said it was a photo of Grimshaw.

"I'd just like to take this opportunity to apologize for my stupid comments," Ramsay told the Nine Network. "I'm mortified that the whole thing has gone this far, my apologies.

Here's how people reacted to the resurfaced clip.

@JBinAV @ThunkSupreme She straight up yelled “this guy does not respect me!” In Spanish. Her body language is more… https://t.co/GpuTVUeHrT
— Kanashimi (@Kanashimi) 1546817310.0

i recently made a post on my finsta about gordon ramsay's work before seeing his disrespect and general slimy behav… https://t.co/2GwEZiBBKr
— lainey (@lainey) 1546924350.0

@GordonRamsay you treated Sofia Vergara with utter disrespect. You sexually harassed her to the point where you act… https://t.co/PXhaQuZt00
— Steph Dyhrberg (@Steph Dyhrberg) 1546888651.0

What an absolute creep. Vergara looks like she's being as assertive as she can in the circumstances, and he's takin… https://t.co/HqIkdgWasY
— Nooruddean (@Nooruddean) 1546904892.0

Sofía, you're a class act. Gordon, we all hope you've grown up in the last nine years.

This article is an updated version of a previously published post from our partners at Someecards by Kimberly Dinaro.