Cassini is crashing into Saturn. The final photos are nothing short of astounding. 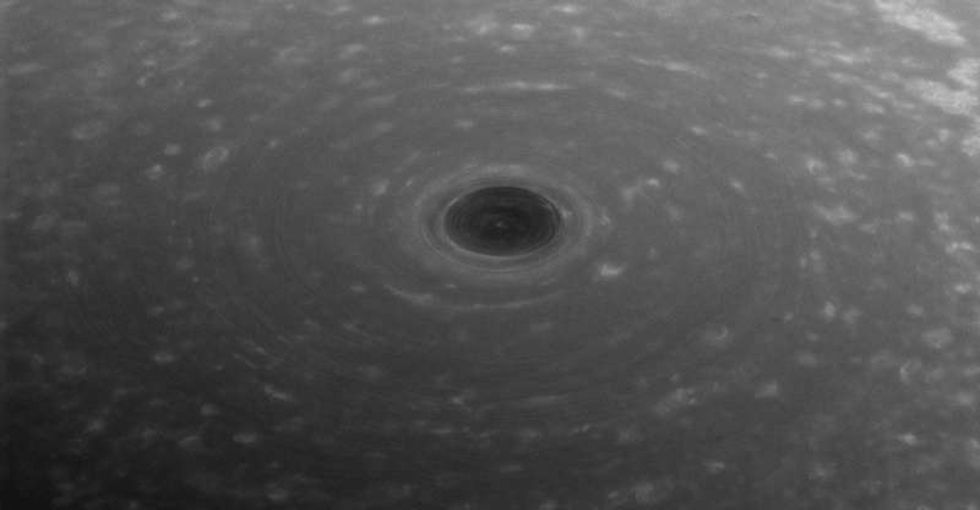 On Sept. 15, after 20 years in flight, more than 2 billion miles traveled, and a series of groundbreaking planetary orbits, Cassini will enter Saturn's atmosphere and disappear.

In the meantime, the plucky spacecraft is racing against the clock to grab a few final dramatic shots.

The images have been nothing short of astounding. On an Aug. 20 dive, one of its last, the craft captured all of Saturn's main rings as it passed by on its way toward the planet.

Since its first orbit in 2004, Cassini has given scientists an unprecedentedly detailed look at one of our solar system's most complex and photogenic planets.

The flybys returned striking new clues to the origin of Saturn's rings and included studies of Titan, the planet's largest moon and one the most Earth-like places in our solar system — all while taking some sweet pictures along the way.

In 2007, Cassini shot "On the Final Frontier," arguably the most iconic image of the planet ever captured.

The natural mosaic was compiled over the course of two hours. Three of Saturn's moons can be seen at approximately 2 o'clock, 4 o'clock, and 8 o'clock  (if you squint).

This 2005 photo of the planet's northern hemisphere captures it in blue, closer to the color of Uranus or Neptune than previously thought.

Over time, as the shadows from Saturn's rings moved further south, the color changed to the more-familiar light gold.

Radio bursts detected by the craft led researchers to believe they were witnessing a giant electricity-generating thunderstorm.

Five years later, Cassini captured images of yet another storm, one of the most violent ever recorded in the solar system.

Storms on Saturn, the craft confirmed, are both infrequent and powerful. Disturbances as intense as the 2010 squall above only occur roughly every 30 years.

In several flybys of Titan between 2007 and 2014, the craft tracked the appearance of a "magic island" floating in a methane and ethane sea on the moon's surface.

Researchers believe the variation in the feature's size could also be due to seasonal change.

To kick off its farewell tour, what its operators are calling its "grand finale," Cassini captured one of its best photos — a stunning image of Saturn's polar vortex bathed in sunlight.

The photo was taken just before the high point of Saturn's northern hemisphere summer, after which the region will slowly descend into darkness that will last years.

Like its mythological namesake, Saturn inevitably devours its children — and, apparently, its most dedicated photographers.

Nevertheless, when Cassini goes dark, it will do so having forever transformed humanity's understanding of its galactic neighborhood.

Thanks to its tenacity and the countless man-hours required to see it on its way, it leaves behind a universe that feels just a little bit smaller.