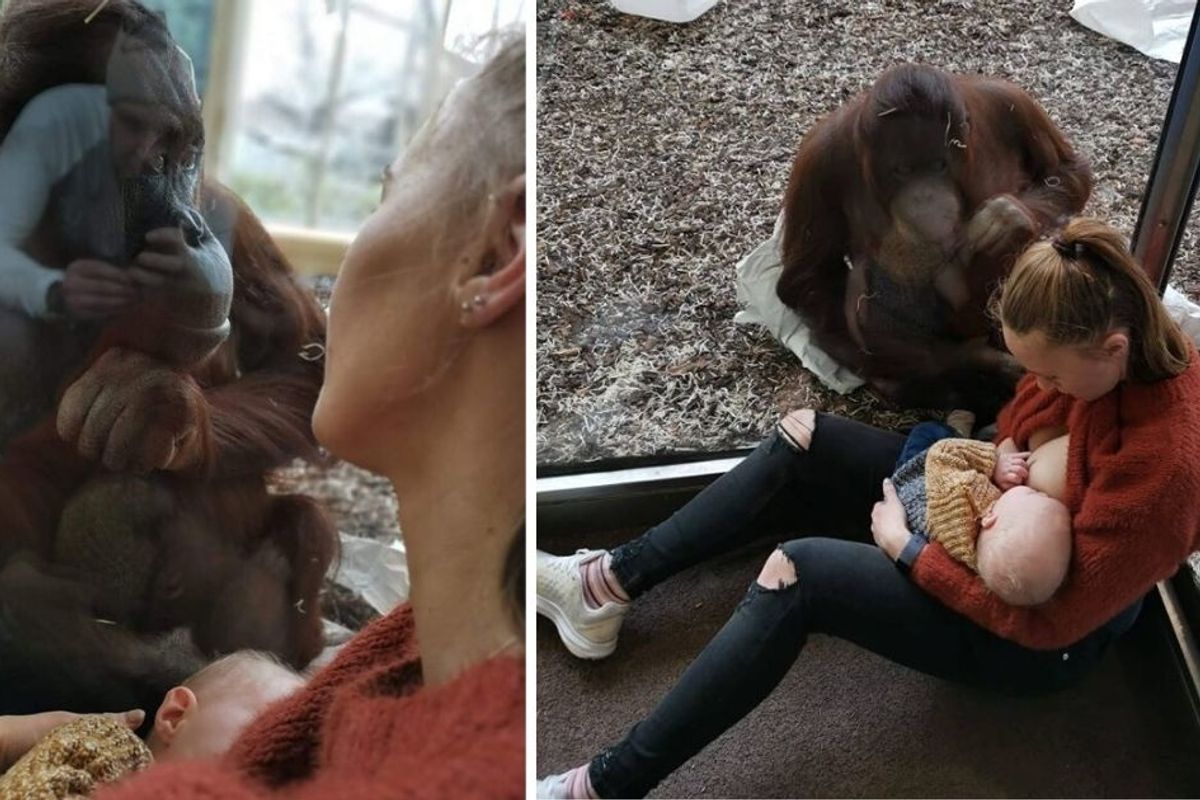 RELATED: Orangutans are pretty much the best. And, guess what, there's a whole new species.

"I visited Schoenbrunn zoo in Vienna whilst on a mini-break with my partner and son. We nipped in to see the orangutans at the end of our day who were happily playing in the enclosure, so I went to the window for a closer look and sat down by the window so my lb could see the orangutan who was roughly 5/6ft away. She then got up, carried a piece of cloth to the window and sat down with me. She looked directly into my eyes then placed her hand up as if to touch my son. I was in awe of this beautiful creature already."

"My son wanted feeding and as it was quiet I fed him whilst I sat there. The way the orangutan reacted took my breath away she kept looking at me, then my son then back again," she continued. "She sat with me for approximately half an hour, kept stroking the glass and lay down next to me as if to support and protect me.

I had to share this because my mind was blown. We may be a species apart but breastfeeding connected us today in a once in a lifetime moment that will stay with me forever. I'm also incredibly lucky that my partner caught all of this on video 💕"

The Facebook page added a story about a gorilla being taught to breastfeed by women from La Leche League, an organization dedicated to supporting breastfeeders:

The story has been shared more than 37,000 times, with many commenters stating how beautiful and moving it was. Others, while appreciating the beauty of the animal encounter, expressed sadness at seeing such a creature in captivity. As with practically every post about animals in zoos, debate broke out over whether or not zoos are helpful or harmful to the animals they house.

And like most debates, people's opinions fall along a broad spectrum. Some feel that zoos are the best way for people to learn about animals first-hand, which leads them to care more about protecting them in the wild. Some acknowledge that captivity isn't ideal, but that many animals die individually or go extinct as species without the work they do. Some feel that it's always wrong to keep an animal in captivity, no matter what. Even animal experts don't agree on this front.

RELATED: This epic zoo escape story shows how fantastically smart orangutans can be.

And not all zoos are created equal. Many zoos have moved more toward a rehabilitation and conservation model, and there's no question that many animals who have been raised in captivity would not survive if they were suddenly released into the wild. There's also the issue of whether trying to limit natural breeding in captivity falls under the ethical treatment of animals, as breeding is a natural animal instinct. And what about the animals that have gone extinct in the wild and can only be found in zoos? There are a million questions with a million unclear answers when it comes to zoos.

However there is one thing most can agree on. Whether or not you think zoos are helpful or harmful, necessary or not, they largely exist today because of human activity mucking with nature. The same nature that compels this creature to connect with a human mother, despite her unnatural surroundings. The same nature that humans are destroying to get palm oil for our cookies and soaps, leading orangutans to the brink of extinction. The same nature that we are all responsible for protecting.

Whether we find this story sweet or sad or something in between, the reality for orangutans in the wild is worth our attention. Visit www.theorangutanproject.org/ to learn more about how to help.