Being Santa is not a job, it's a calling. Meet the men behind the magic. 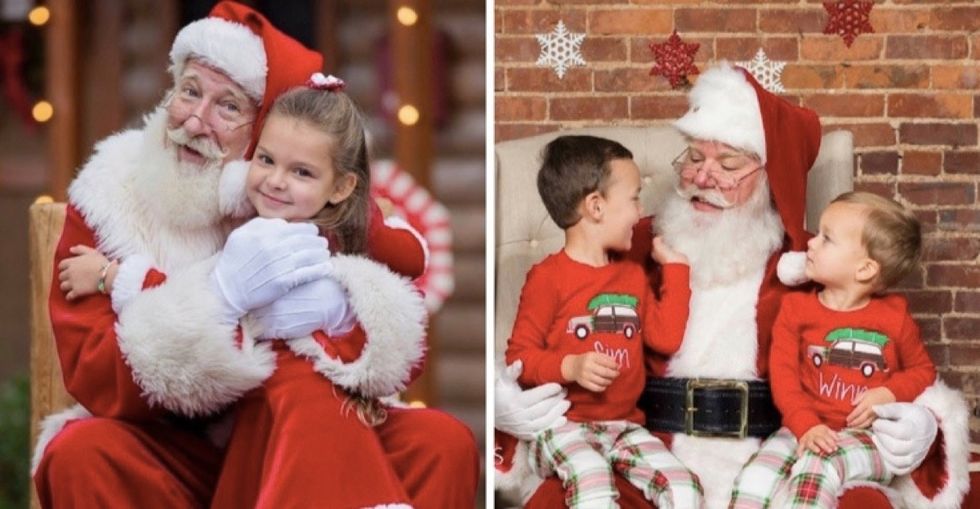 Doug Keesey and Rick Rosenthal are known in Arctic circles (and greater Atlanta) as Santa Doug and Santa Rick.

Rick and Doug are two of Georgia's most popular Santa Clauses, entertaining the young and young at heart at events across the city.

I went looking for the inside scoop on Santa Claus to discover how the "cookies are made" so to speak.

My conversations with these holly, jolly gentlemen revealed some surprising Santa secrets and tricks of the trade. It's easy to see why kids adore them so much. Here are seven surprising things I learned chatting with two of the men behind the magic:

1. Why become Santa? Holiday cheer is a helluva drug.

"It becomes a calling for a lot of people," Santa Rick says. "Most people don't choose to be Santa, Santa chooses them."

That's the case for Santa Rick, 64, who's been Santa for 47 years. He started out with a full black beard under his fake one, but now he relies on the real thing. He's a trained mediator and arbiter, a skill that comes in handy when kids get a case of the gimmes.

As for Santa Doug, it's his second season as the Big Guy. He has a soft white beard and loves kids, so he thought he'd give Santa work a try when he retired from his video production business. A friend, who is also a Santa, said, "Why wait?" So, at just past 50 years old, Santa Doug was born.

What keeps them coming back? You don't find that kind of genuine happiness just anywhere.

"One of the things that really keeps me going is knowing that I'm helping families develop memories that will last for years to come, something that will really be special for them in the future," Santa Doug says. "That's not something you get to do every day. What a privilege to be in a position to be that kind of blessing to others!"

2. You don't know busy until you take a look at Santa's calendar.

There's more to being Santa Claus than long shifts at shopping malls. Santa Rick appears year-round as the man himself, helping out with birthday parties, special announcements, and potentially a spring wedding. There are two gigs he won't take though.

"I will deliver anything but divorce papers and termination papers," Santa Rick says. "I'm a Santa with a sense of humor, but it's gotta be in good taste."

"I get pretty busy, honestly, I think 'Wow, the schedule is just going to be very difficult, and I don't know if I have the energy, and I'm tired and wish I could stay home,'" Santa Doug says. "But then I get out there and see that kid that is just awestruck by Santa walking in the door and you think, 'OK, that's why I'm here.'"

3. There are schools to learn how to be Santa. But one of them is essentially Harvard.

Anyone can dress like Santa, but truly becoming Santa takes some practice. There are Santa Schools across the country that open their doors to teach people how to bring the big guy to life. Classes include how to dress, how to answer tough questions, how to set up a Santa business, and even how to make simple toys.

After mentoring and teaching at Santa Schools, Santa Rick opened his own school, Northern Lights Santa Academy, which held their inaugural session this year.  While he's proud to teach the next generation of Clauses, he hopes they each bring their own unique style to their work.

"Does [attending Charles W. Howard Santa Claus School] make you a good Santa? No, it just means you got a good education," Santa Rick says. "What makes you the best is you. You have to figure out how to utilize the information ... to make you the best Santa you can be."

The Northern Lights Santa Academy is in session! Photo courtesy of Santa Rick.

4. Santa Claus hears some seriously silly stuff, and sometimes even he can't keep it together.

Kids are nothing if not honest, so Santa Rick and Santa Doug have heard it all. One child who (definitely already had one at home) asked for a toilet this year. Another hoped the baby his mother was carrying was a boy, and not a girl, prompting surprised faces from everyone in the room who didn't know his mother was expecting.

"You really do laugh, and it shuts you down, you're just laughing so hard," Santa Rick says. "You just get told these hysterical stories."

5. But Santa is also a kind, loving ear in tough and tender moments too.

For many kids and their families, Christmas isn't the most wonderful time of the year. Santa Rick and Santa Doug have both heard some emotional requests from kids and the young at heart. Some wish for peace on Earth. Others ask for a relative in the hospital to get well. A mother had a teary encounter with Santa Rick while her son was deployed. And last year, a child asked Santa Doug to help get his parents back together.

"There's not much you can say, as Santa, to things like that," Santa Doug says. "All I could do was say, 'Santa understands. I know how you feel and I'm very sorry, but Santa loves you ... and it will be all right.' I think he just kinda wanted Santa to hear and understand."

6. Santa would dominate an improv class, as the big guy has to be quick on his feet.

When you're working with kids, you have to stay ready. That's why Santa has an answer for everything. Even if a child asks for one thing, Santa knows better than to make any promises. Instead, Santa Rick usually tells the kids: "I'm gonna talk to the elves about that ... but did you know the elves are very busy? They make the presents and put them in a box and then they wrap it and sometimes they forget what's in there. You might end up with a pogo stick."

What happens if Santa Rick and his Santa buddies go out for lunch and a child sees a half-dozen Santas in one place? Don't worry, they've thought of that too. "We say it's a Claus family reunion," he says with a big laugh, clearly nailing the whole, "bowlful of jelly" business.

7. Santa is about more than presents. He's all about hope.

For kids of all ages, Santa is more than a toymaker, gift-giver, or elf-in-chief. He's magic personified. He's a jolly old reminder  to never stop believing in the impossible.

"What Santa really does is he inspires hope," Santa Rick says. "We have to have hope to go on and that's really what Santa is. He's a toymaker, but he gives people hope and belief in the best of the best."

After this year, we could all use a little magic. Between international conflict, a tiring election, and Santa's own home melting away, there's a lot to be scared or worried about. But this is the season to hope, dream, and plan. To look ahead to the future with optimism and hope, even in the face of doubt.

No matter your age, background, or faith tradition, it feels good to believe in the impossible. After all, hope is the one thing Santa always delivers.