Winter is coming at Standing Rock. Are these new teepees the answer? 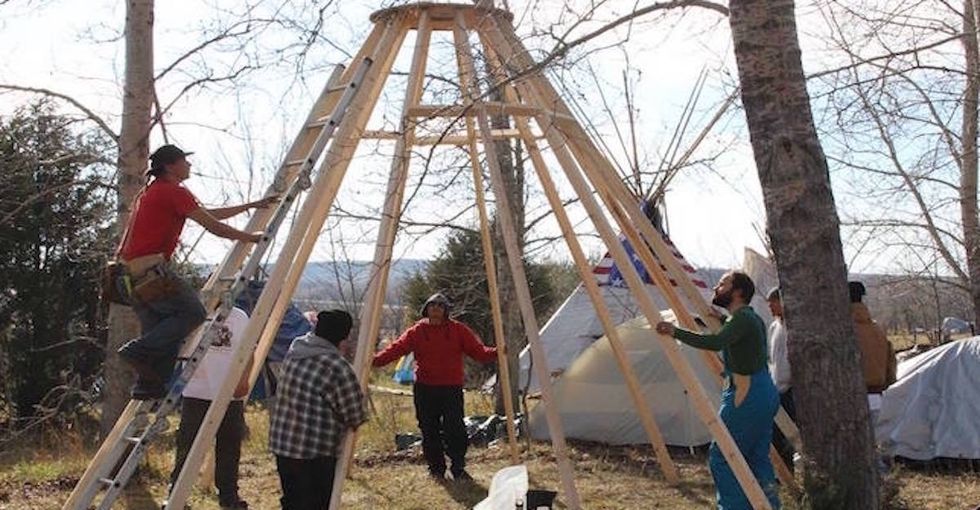 There is more to Standing Rock than protests. Every day is an exercise in peaceful prayer and building community.

In the few short weeks I’ve been at Standing Rock, I’ve witnessed the violence of three major incidents involving police and water protectors. I’ve also witness hundreds of people come together to protect sacred water sources and lands — all the while being under constant surveillance and psychological violence.

The most egregious of incidents occurred the day I arrived, Oct. 27, when authorities raided the 1851 Treaty Camp, the “front lines” of water protectors.

Using pepper spray, noise cannons, rubber bullets, tasers, and batons, police attacked peaceful demonstrators, grandmothers, people in prayer and ceremony. Over 140 were arrested. It was shocking and frightening to arrive to that.

It’s easy to think violence is the only thing happening at the Standing Rock Sioux Tribe resistance against the Dakota Access Pipeline, but that couldn't be further from the truth. Amid the chaos, there is order.

There are currently three camps at the Standing Rock reservation that make up the resistance working toward halting the pipeline.

The camps — Sacred Stone, Oceti Sakowin, and Rosebud — have thousands of people working toward “winterizing,” the prep work being done for winter.

Soon, the weather is expected to drop below zero and could reach -40 degrees Fahrenheit.

Paul Cheyok'ten Wagner — a member of the Saanich First Nations of Vancouver Island and an artist and inventor — is one such person looking ahead. He is designing a contemporary teepee that costs thousands of dollars less than a traditional teepee and uses materials found in any hardware store.

Currently living in Seattle, Wagner, answered the call for Canoe Families to join a spiritual journey down the Missouri River in early September. The event was focused on native unity for the protection of sacred waters and lands threatened by the North Dakota Access Pipeline. That’s when he felt a call to do something to help the water protectors of Standing Rock.

“Climate change is my number one issue,” Wagner says. Having been involved in movements like IdIe No More, which calls on all people to honor indigenous sovereignty and to protect water and land, going to Standing Rock seemed like a natural next step.

Through his campaign called Winter Shelter for Standing Rock, Wagner is hoping he and his crew of volunteers will build at least 40 of these new teepee structures.

The teepees, which have been dubbed “tarpees” by Standing Rock locals, use white heavy-duty poly tarp material with anywhere from 8 to 16 poles and a round plywood roof top. Traditional teepees can use 12 to 25 poles cut from lodgepole pine trees, which have to be cut, shaved, and cleaned. Usually, teepees are covered with buffalo skins or canvas — the more traditional, the more expensive. Tarps cut those costs dramatically.

“I’ve always been inventing things,” says Wagner, who experienced the frigid night air after sleeping in a summer tent at Standing Rock. “At first I thought, a cabin. But that would be too expensive; tents wouldn't hold up in the winter and teepees also need poles and canvases and that would raise the costs.”

A banner hangs just below the tarpee ceiling. Photo by Wendy Carrillo.

As of now, at least 10 additional tarpees have been built at the various camps, each comfortably housing up to 12 people.

Bryan Fabert, a volunteer with the Winter Shelter for Standing Rock campaign, has been busy training others on how to build the structures. There is an urgency to have as many sound winter shelters as possible.

“This has never been done before,” Fabert said while hammering away at some beams at camp. “Every day we’re discovering new things that will improve on the design, especially for insulation and heat.”

The original seven-gallon stoves needed to be watched constantly and were too small to keep wood burning overnight. Because tarp is much lighter than canvas, the warmth of the stove diminishes as people sleep.

But Wagner says he’s already created a new design for a stove. “The original stove is going to be replaced with a 30-gallon barrel stove of my own design with a baffle that will create a very clean burn with little wood, all the while creating more heat.”

One of the new 30-gallon barrel stoves arriving at Standing Rock. Photo by Wendy Carrillo.

The new stoves and the circular tops are set to arrive at Standing Rock via bus from Seattle, alongside a crew of more volunteers.

Danielle Gennetly, who is of Mi’Mack Nation heritage as well as French Canadian and Syrian heritage, was an early supporter of Winter Shelter for Standing Rock and is staying through winter. “I felt called to be here,” she says. “I feel very connected to nature, to mountains and waterfalls; we have to protect these things.”

Gennetly shares her tarpee with female elders and has adorned the space with an altar by the stove, surrounded by sage and cedar and colorful streamers with words like "equality" and "diversity" hanging from the ceiling. She was one of the first to volunteer to build the tarpees and is now busy sorting food donations and creating communal spaces, such as the pantry, a mess hall for dining, and a volunteer space at one of the camps.

“This is sacred land,” Gennetly says of Standing Rock. “We must be prepared to come together and protect it; we cannot do it alone.”

Wagner echoes the same sentiment. “It’s going to take people coming together to protect water, to be partners in this peaceful movement. That’s who we are as human beings. We are protectors of water and these sacred relationships with nature."

The Friday following Thanksgiving, the U.S. Army Corps of Engineers notified Standing Rock that protesters needed to vacate all campgrounds north of the Cannonball River by Dec. 5. A letter suggested the safety of the protesters was the main concern.

“Our tribe is deeply disappointed in this decision by the United States, but our resolve to protect our water is stronger than ever,” Standing Rock Sioux Tribal Chair Dave Archambault II says of the decision.

The notice came as a surprise because the U.S. Army Corps had previously announced more analysis was needed for the Dakota Access Pipeline to move forward. Currently, no final decision has been made on granting an easement to Energy Transfer Partners, the corporation behind the pipeline. An easement would allow Energy Partners to dig underneath the Missouri River.

The fight for clean water is not solely an issue affecting the Standing Rock reservation. A leak could affect millions of Americans who rely on water from the river, as well as wildlife and gaming.

The Missouri River is the longest river in North America, crossing Montana, North Dakota, South Dakota, Nebraska, Iowa, Kansas, and Missouri. The Standing Rock Sioux Nation relies on its water, as do 17 million other Americans downstream.

As winter approaches, water protectors say they are not leaving the camp.

They will need to stay warm and think about new strategies to protect the water and land.

Watch the video below for more on how a tarpee is built: