Armed with a Sharpie and rocks, this guy is lifting people's spirits every day.

They're rocks with faces, but they're so much more. 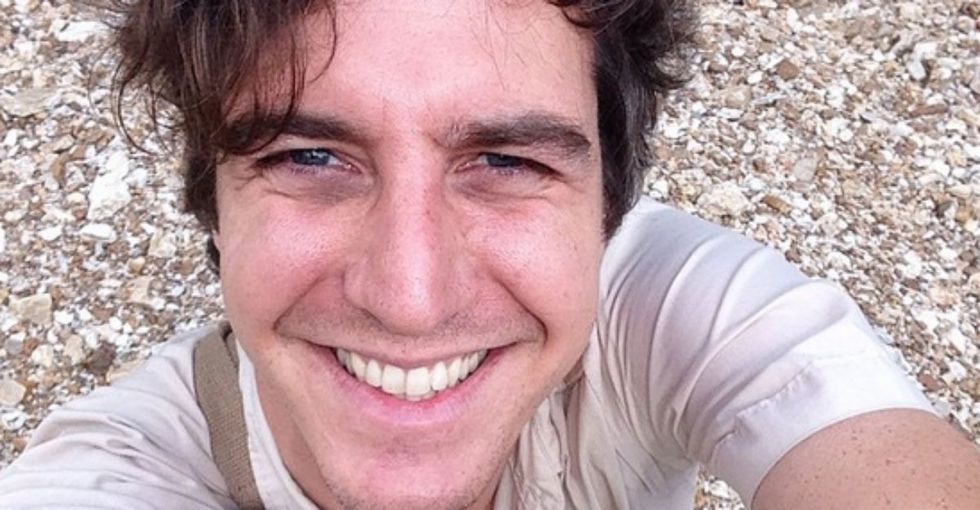 The best parts of the world are those that are full of random acts of kindness.

In the wake of Ferguson and Black Lives Matter, the St. Louis area has a reputation for being a segregated hot bed of neighbor-against-neighbor rage. That's what we've seen on the news.

But what if you were there?

You'd get to see how people actually live every day. You'd see neighbors of all kinds talking together, playing together, and helping each other out.

That's exactly what artist Bryan Payne is doing — and he's showing us we're all connected.

He's a local artist who's hiding treasures. What? Yes. Image by Jarred Gastreich.

Bryan is the guy behind a unique treasure-hunting project: Doodlestones.

"This constant impulse to want to connect. I feel like everyone's got this," Bryan says.

So what, exactly, are Doodlestones?

Bryan is an artist and amateur urban archaeologist and treasure hunter, and he's putting his passions to use by creating small stones decorated with friendly faces. He hides them in places where people cross paths as a way to help make his town a friendlier, kinder place. By geotagging and using location clues in the images he posts on Facebook and Instagram, he leaves behind a trail of tiny, happy artworks.

The 75 year old Kingshighway bridge is being torn down and with it goes the infamous diy skate park that is underneath it. Bug Chaser played a show here yesterday to send it off and tons of people were getting their last skate session in. I did a little memorial with the objects found on site, by next week it will all be gone.
A photo posted by @bryancharlespayne on Jul 5, 2015 at 6:15am PDT

"I wanna find a way to connect all people. Not just an art crowd or a certain scene. It crosses all boundaries." Bryan says.

Each stone comes from a river in his home state of Missouri. On each stone, he writes "#doodlestone," the date, and "finders keepers."

Thumbs up. Image by Jarred Gastreich.

A quick glance at its Facebook page shows just how many folks agree and are joining in.

"People following the clues are starting to find them," Bryan says. "They're all geotagged. You can click on the map and see them on the map, whatever the satellite proximity is."

Bryan wants everyone to be on a hunt for treasure, whether that be for Doodlestones themselves ...

Got three doodle stone fans at the farmer's market, so I gave them each treasures to take home. They told me they paint on stones with their grandma.
A photo posted by @doodlestones on Jul 25, 2015 at 8:47am PDT

...or a new small business they find while hunting for Doodlestone treasure...

Found my first #doodlestone! I'm leaving it behind because it fits so perfect. Hint: Egghead can be found at the best place to get grilled cheeses on a Saturday morning.
A photo posted by It is Alright, Ma. (@itisalrightma) on Jul 25, 2015 at 7:17am PDT

...or a kind moment with a neighbor they might not have known.

Portrait of an artist being super friendly. Image by Jarred Gastreich.

That very thing has already started happening around the St. Louis area. One of the Doodlestone treasure hunters found him on Facebook, and they met up.

"The family in the photograph contacted me after finding the two Doodlestone ghosts in their planter. ... I ended up giving them each a Doodlestone of their choice from my newest batch as a thank you for their willingness to engage in the project in a new way," Bryan said. "What I got to experience with them is a huge part of what it's about for me: hearing stories, looking at treasures, and finding a new way to connect with the community."

One small idea is turning into a discovery ground for an entire town.

Bryan notes, "This is the first way that I've been able to use my resources to create some sort of community, building to bring people from across barriers together."

Helping humans connect with their surroundings and tap into their community. It's an innately positive pursuit. How does it not help to direct somebody to a new coffee shop or a new park?

"I think both things help in different ways, it's all connected," he says. "Taking people outside their comfort zone and leading them somewhere else that's safe … or fun or adventurous."

And from the looks of it, this artist's hope to be a small part of creating more joy and connection and kindness is already working.

I can't wait to see it grow.