'Are you kidding me?': Amy Poehler derails silly Q and A to talk about dire issues. 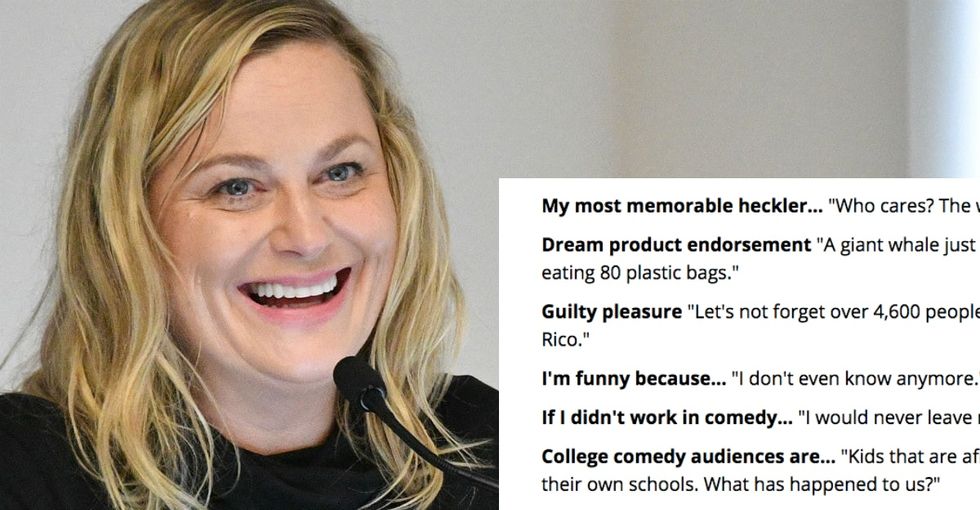 Some (most?) days, it feels like the world is going to hell in a handbasket.

No one gets along anymore (or at least it feels that way). Social media is like a bad ex who loves toying with our moods. The news cycle is downright exhausting. Oh! And climate change is literally destroying our planet faster than ever before.

Thank you, K.C. Green, for blessing us with this all-too-real meme.

It can be ... a lot. So escapism can be a good thing! Read a silly book, binge on your favorite sit-com, walk in circles until you forget who the president is. Whatever works for you.

Some days, though, it's honestly too difficult to focus on anything trivial when it feels like there's so much on the line.

Amy Poehler gets the feeling.

Poehler did a question and answer session for The Hollywood Reporter's "40(ish) Most Powerful People in Comedy" feature.

And the interview went spectacularly well or terribly wrong, depending on how you see it.

In response to eight lighthearted questions posed to the comedian, Poehler flipped the script, answering most of them with sobering realities about the current state of affairs.

"Who cares?" Poehler answered as a way to start things off when asked about her most memorable heckler. "The whole world is on fire."

Image via The Hollywood Reporter.

College comedy audiences are "kids that are afraid they will be shot in their own schools," she continued. "What has happened to us?"

"Let's not forget over 4,600 people have died in Puerto Rico," she chimed in when asked about her guilty pleasure.

"A giant whale just died in Thailand after eating 80 plastic bags," she answered instead of detailing her "dream product endorsement."

Can anyone blame Poehler for getting real in her interview?

Things do feel particularly bad right now. But we don't have to accept the status quo.

Our whole world may feel like it's burning, but — believe it or not — there's a lot of good happening too.