The Force is strong with this one (and his ability to deal with this kind of ignorance). 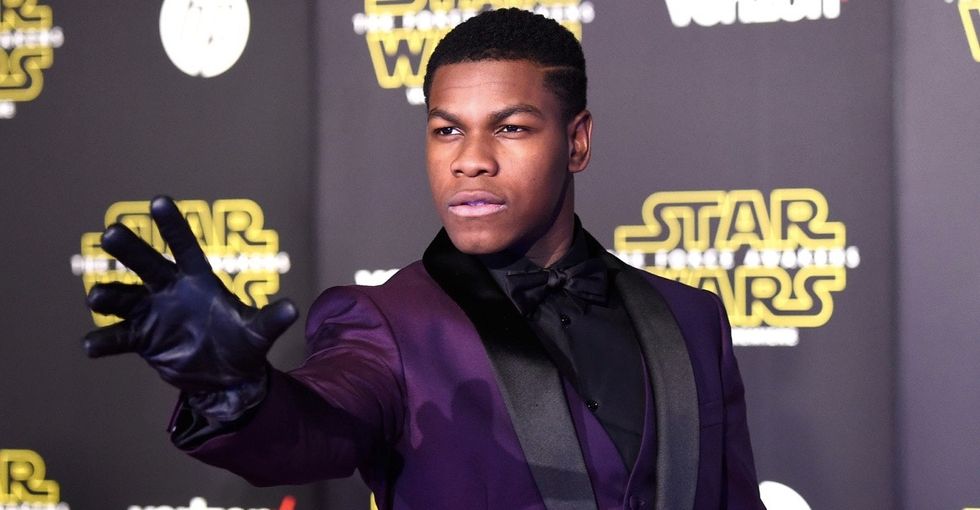 Maybe you had the pleasure of checking it out (but if not, don't worry, no spoilers). The film was a massive success, but underneath that was a bit of a squabble among fans surrounding some casting decisions.

A $524.9 million opening weekend! Not too shabby, eh? Photo by Andrew Burton/Getty Images.

Controversy surrounded the casting of one of the movie's lead characters.

"BB-8! BB-8! Who are you wearing!?" Photo by Alberto E. Rodriguez/Getty Images for Disney.

The controversy was in the casting of John Boyega, seen below, in the role of Finn. In the film's first trailer, released last year, Boyega was shown taking off a stormtrooper helmet. Some fans were less than thrilled, saying that a black man shouldn't be playing the role of a stormtrooper on the basis of ... uh ... well, no basis, really. They just didn't like it.

Boyega responded with a simple statement: "Get used to it."

That, sir, is how you dress for a movie premiere! Photo by Frazer Harrison/Getty Images.

In October, after a group tried to organize a boycott of the movie, Boyega struck back with a bit more force.

In an interview with V Magazine, Boyega addressed critics who had established their opinion of him based solely on the color of his skin, rather than his talent as an actor.

But in perhaps the best comeback yet to this outdated argument, Boyega let the ticket sales speak for themselves.

On "The Wake Up Show," host Sway got right to the point, asking what it's been like to be on the receiving end of baseless, ignorant criticism. Boyega's response was priceless.

We need to continue to push for increased diversity in Hollywood, precisely because this type of backlash exists.

Whether you're an actor, director, writer, producer, or just a consumer of the entertainment industry, diversity is important (and yes, you benefit from this even if you're white and male). It's why diversity-driven initiatives, like that led by "Star Wars" creator George Lucas and his wife Mellody Hobson, exist to try to level the Hollywood playing field.

Right now, white and/or male is considered the default in just about any lead role. Just look at the backlash to the news that a black actress (Noma Dumezweni) had been cast as Hermione in the upcoming "Harry Potter and the Cursed Child," even after J.K. Rowling herself said Hermione could be a woman of color.

To see a record-busting action movie like "Star Wars" being led by a black man and a woman (Daisy Ridley as Rey) is not only needed, but it's more revolutionary than anything a special effects team could even begin to touch. This kind of casting shouldn't have to be considered subversive, but right now, that's the reality we live in.

People like Boyega, bravely pushing back on hate, are helping make the world a better place for future generations of actors.

Watch Boyega's appearance on "The Wake Up Show" below.