He and Mellody Hobson took a step toward helping underrepresented groups in Hollywood. 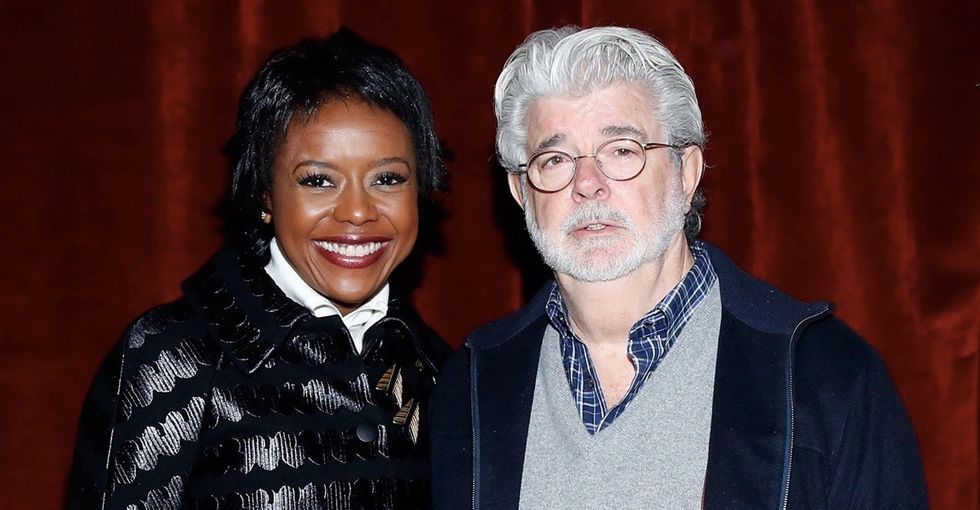 George Lucas graduated from the University of Southern California in the late 1960s before going on to make some of culture's most iconic films. In 2006, he donated a whopping $175 million to USC's film school. Nine years later, and he and his wife, Mellody Hobson, opened up the pocketbooks once again, this time with a much more targeted initiative.

The donation marks the creation of the George Lucas Foundation Endowed Student Support Fund for Diversity. It's the largest single donation for student support the school has ever received.

Here's how it'll work, according to the school's website:

"Undergraduate and graduate African American or Hispanic students will receive priority consideration for financial support from the fund. The recipients, who will be called George Lucas Scholars or Mellody Hobson Scholars, will first be awarded for fall 2016. The awards will be split equally between male and female students."

“Hispanic and African-American storytellers are underrepresented in the entertainment industry. It is Mellody's and my privilege to provide this assistance to qualified students who want to contribute their unique experience and talent to telling their stories," Lucas said in a statement posted to the school's website (emphasis added).

USC's own striking 2014 study found that, yes, diversity is certainly lacking in Hollywood.

When it came to characters, nearly three-quarters were white.

And when it comes to diversity among directors, things are even worse.

"Across the 100 top films of 2014, only 5 of the 107 directors (4.7%) were Black. One Black director helmed two pictures and only one was female. Only 45 Black directors have been attached to the 700 top‐grossing films. This represents 5.8% of all helmers in the years analyzed. Only 19 Asian directors worked across the 700 top‐grossing films. This is an overall percentage of 2.4%. Only 1 Asian director was female across the films analyzed and was listed as a co‐director."

Lucas' contribution will certainly help, and hopefully spark a wider conversation about, diversity in Hollywood.

Fixing Hollywood's diversity problems isn't something that can happen overnight. Change hinges on so many factors, and one is the question of whether those in a position of power will use that power to lift the voices of minority filmmakers and actors. That's why it's important that people like Michael Moore and Geena Davis speak up and that George Lucas makes contributions like this.

Lucas resists the dark side of the Force and proves himself to be a true Jedi. Photo by David Paul Morris/Getty Images.

Lucas' donation helps push back in an effort to break down the barriers that prevent others from telling their stories. Well done, George.