After UW's marching band bus crashed their rivals responded with a moving tribute. 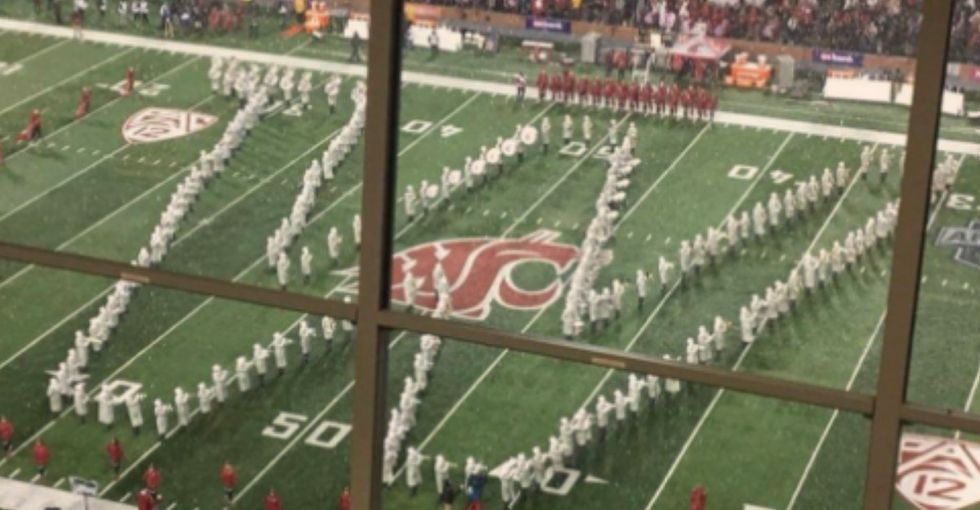 The rivalry between the UW Huskies and the WSU Cougars runs deep—but not as deep as human kindness.

Having grown up in Eastern Washington, I can attest to the physical and philosophical East/West divide marked by the Cascade Mountains. And that divide is highlighted every year during the Apple Cup, the football matchup between the University of Washington Huskies (West) and the Washington State University Cougars (East).

The Apple Cup has been played 110 times in Washington's history, with the location alternating between UW's big city Seattle and WSU's small town of Pullman each year. When it's held in Pullman, as it was this year, weather can be a big question mark. This year, it snowed cats and dogs (ba dum pum) throughout the entire game.

But inclement weather played a big role before the game even started.

A bus carrying members of the University of Washington marching band hit ice and crashed on Thanksgiving Day.

The Apple Cup is always played Thanksgiving weekend, which often means making the 5-hour drive across the state on the holiday itself. This year, freezing rain and icy road conditions east of the Cascades spelled trouble for a bus carrying UW marching band members on Thanksgiving Day.

That afternoon, one bus in a 6-bus caravan carrying the team's marching band overturned near George, Washington. (Yes, that's really the town's name.) Thankfully, no one was killed or seriously injured, but a couple dozen students needed to be treated for cuts, concussions, and pain. The rest of the travelers—more than 300 people—would have been stranded if it weren't for the kindness and hospitality of the locals.

The tiny town of George, Washington gave up their Thanksgiving night to provide shelter and food.

Shortly after the bus crash was reported, stories started pouring in of the kindness of the people of George. The town of approximately 500 people and others from surrounding small towns showed up in a big way, opening up the elementary school for the marching band and faculty to triage the injured and regroup after the accident.

In a remote area with few ambulances and all-volunteer fire departments, community members are used to doing what it takes to help in an emergency. Families brought food, blankets, and mattresses to the school. For the entire evening, the UW marching band was treated to warmth, hospitality, and kindness from those who were probably rooting for their team to get trounced by the Cougars the next day.

Colors are just that: colors.This afternoon, one of the 6 buses transporting the UW Husky marching band caught a patch...

In addition, the WSU marching band learned the UW fight song and played it to kick off the Apple Cup.

To add even more warm fuzzies to this story, as soon as the WSU marching band found out that none of the UW band would be making it to the game, they took it upon themselves to learn their rival school's fight song—in less than 24 hours. Then they played it at the game.

WSU also marked off a section of the stands at Martin Stadium in Pullman, and left it empty in honor of the UW band members who couldn't attend.

The Cougs may have lost the Apple Cup this year, but they won the hearts of people everywhere.

I live in Cougar country and have witnessed the passion and fervor with which WSU fans cheer on their team, especially when it comes to the Apple Cup. It's impressive, if not a little scary sometimes.

But when tragedy strikes, rivalries quickly take a back seat to humanity. The good people of George stepping up on Thanksgiving and the WSU band playing the UW fight song turned a frightening incident into a beautiful story of people supporting one another. These teams who fight like cats and dogs (or Cougars and Huskies, to be precise) know that when it comes down to it, we're all part of the same family.

More of this, please.