After a 24-year-absence, Adam Sandler returned to SNL and sang a touching tribute to Chris Farley. 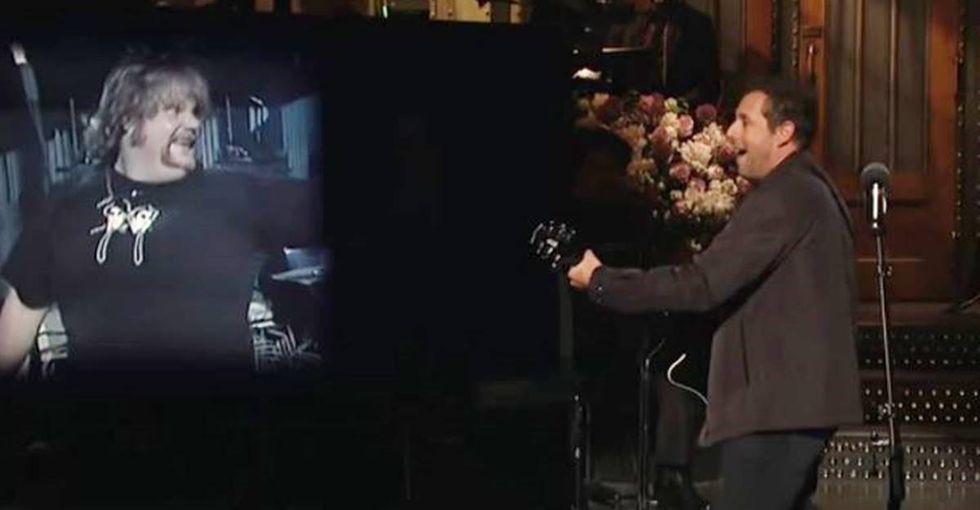 “Saturday Night Live” tied its season high for ratings on Saturday, May 4th with an episode that marked the return of comedian Adam Sandler.

The "Billy Madison" star was fired in 1995 after a five-year run on the show, and returned to host for the first time. During his monologue, he joked that after his firing his eventually won out when his films grossed a combined $4 billion.

Sandler's appearance came on this heels of his popular Netflix special, “100% Fresh,” which marked the comedian's return to stand-up comedy.

In the "Romano Tours" sketch, Sandler played an American tour guide who fights back against negative reviews of his Italian tours. “If you're sad now, you might still feel sad there, okay?” Sandler said in a perfect deadpan. “You are still gonna be you on vacation.”

He also reprised his role of “Opera Man” on “Weekend Update.”

But the night will be forever remembered for a moving tribute he paid to his former SNL co-star and friend, Chris Farley. Farley died of a drug overdose in 1997 at 33 years old.

Towards the end of the show, Sandler strapped on his acoustic guitar and sang a tribute he originally performed on his Netflix special.

The song referenced some of Farley’s most memorable SNL sketches, including Matt Foley who “lived in a van down by the river.” It also recounted Farley’s life-of-the-party antics and substance abuse issues.

The first time I saw him he was sweeter than honey

Plaid jacket and belt too tight

He wasn't even being funny

Then he cartwheeled around the room

And slow danced with the cleaning lady

He was a one man party

You know I'm talking about

On a Saturday night my man would always deliver

Whether he was the bumblebee girl

Or living in a van down by the river

He loved the Bears and he could dance

That Chippendales with Swayze

When they replaced his coffee with Folgers

He went full on crazy

Without him there'd be no lunch lady

I'm thinking about my boy

After a show he'd drink a quarter Jack Daniels

And stick the bottle up his ass

But, hangover as hell

That Catholic boy would still show up to morning mass

We tell him "Slow down, you'll end up like Belushi and Candy"

He said 'Those guys are my heroes, that's all fine and dandy"

I ain't making that stuff up

That's the truth about my friend

I saw him in the office crying with his headphones on

Listening to a KC And The Sunshine Band song

I said "Buddy, how the hell is that making you so sad"

Then he laughed and said "Just thinking about my dad"

We laughed all night long, all because of Farley

But a few months later the party came to an end

We flew out to Madison to bury our friend

Nothing was harder than saying goodbye

Except watching Chris' father have his turn to cry

Hey buddy, life's moved on but you still bring us so much joy

Make my kids laugh with your Youtube clips or "Tommy Boy"

I tell hands down without a doubt it's you

Yeah, I miss hanging out watching you trying to get laid

But most of all I miss watching you torture Spade

But I wish you were still here with me

And we would get on to shoot "Grown Ups 3"

Yeah, life ain't the same without you boy

And that's why I'm singing about

And if you make enough noise

Give it up for the great