A transgender student was told he couldn't run for prom king. He fought back and won something better. 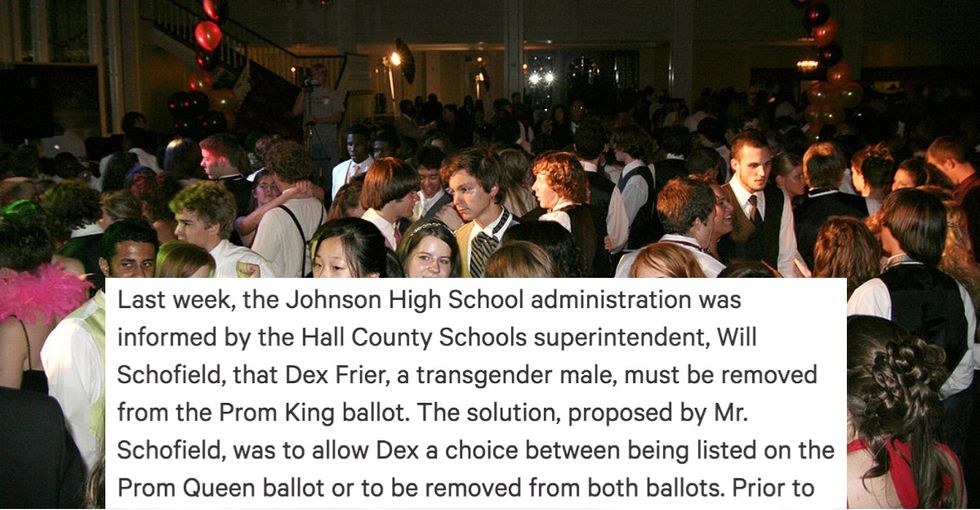 A Georgia high school has adapted gender-neutral prom court terminology, after receiving public backlash for telling a student he could only run for prom queen because he was born a woman.

Dex Frier, who has identified as transgender since his sophomore year at Johnson High School in Gainesville, Georgia, was seriously ecstatic when he received one of six coveted nominations for senior prom king, an honor he was beyond excited about. "I was jumping up and down. Me and my best friend were losing our minds, we were so excited," Frier told CBS affiliate WGCL.

However, school officials told him that because he was assigned female at birth, he could only run for prom queen. He — along with his friends, the student body and others around the world — were not okay with that decision.

Frier and his friends started an online ballot challenging the school’s decision.

My dear friend Dex Frier, a transgender male, was informed by our administrators that the Hall County Board said th… https://t.co/BMEyVjdkD8
— Ashley Dean (@Ashley Dean) 1552960307.0

“Allow transgender boy to run for Prom King,” they dubbed the Change.org ballot, which quickly amassed over 32,000 signatures in a week from individuals around the world supporting their plea for inclusivity.

“Just because I’m not legally male I was going to get excluded from something that every guy has the opportunity to be in high school. It was really upsetting,” Frier, who is often referred to by his teachers with male pronouns, told BuzzFeed on March 21. “As a student I felt I had the right to be put on the ballot.”

He continued: “I don’t know of many trans people who go to this school [but] I don’t want anyone else to have to go through this. It hurts being told you don’t deserve the same rights as someone else because you’re not the same as them.”

The administration was hesitant to make the change, but eventually they came to their senses.

On March 23, the school struck a compromise with the student body. They agreed to change the terminology from Prom “King” and “Queen” to simply having two “Royal Knight” seniors, who could be voted in regardless of their gender identity.

“This plan was one of compromise on both sides, and we would like to thank administration, both at the school and county level, for listening and welcoming our concerns ― and most importantly, implementing a plan to address them,” Frier’s friend, Sam Corbett, wrote about the victory on Change.org. “We hope this petition has not only pushed society further towards human rights equality, but also inspired someone to do the same for an issue in their community.”

He continued: “Not only is that number a symbol of the united support of human rights, but also a testament to the power of the individual.”

Unsurprisingly Frier was named one of the Royal Knights of the evening. Instead of being given the traditional crowns and tiaras, he received a feathered mask.

“It was amazingly overwhelming to win,” Frier told NBC. “They called my name, and all I could hear were my friends cheering for me. I just smiled extremely wide, and when I got to the bottom of the stairs, all of the people that had helped make this happen were either sobbing hysterically or smiling so wide I thought they would hurt themselves.”

Dex Frier’s experience isn’t just a personal win though. It’s a win for inclusivity. But we still have a long way to go.

Despite the reality that more and more teens today are identifying with non-traditional gender labels, many high schools and educational institutions have failed to adapt terminology and gender policies accordingly. However, there has been some progress made in recent years, signifying that things might be headed in a more gender-inclusive direction for children and teens.

At the university level, both Northwestern and Purdue have adopted a gender-neutral homecoming court, and the Chicago Tribune points out that many Chicago area high schools have also eliminated gender from their homecoming courts.

This latest triumph at Johnson High School clearly represents movement toward a more gender-neutral educational system. We can only hope that other schools can adapt their policies accordingly, and don’t have to wait for a situation like this to occur before taking action.

Keep ReadingShow less
relationships
Get stories worth sharing delivered to your inbox
By signing up you agree to Upworthy's privacy policy.
Health

Sober bars and events are growing in popularity with delicious, grown-up alternatives to alcohol.

For as long as there's been alcohol, there have been people who don't drink it. Some don't care for the taste, some don't like the buzz, some have religious prohibitions against it and some are recovering addicts who need to avoid it altogether.

Whatever reasons people have for not drinking, there's an unspoken attitude by some that they're missing out on a key part of social culture, especially when countless movies and TV shows portrays people winding down (or wooing one another) with wine and bonding over beers at bars. There's an air of camaraderie over sharing a cocktail or clinking champagne flutes together that's hard to capture with a basic Coke or sparkling water.

But what if you want that fun, social atmosphere without the alcohol? What if you want to go out and have fancy, alcohol-free drinks with your friends at night without being surrounded by drunk people? Where do you go for that?

Seeing the baby raise his little hand moved the father to tears.

An incredible moment captured between a father and his newborn son has brought viewers to tears.

Miraculously, as soon as Johnson begins singing a chorus of “hallelujahs,” Remington’s tiny hand raises as though he were carried away by the music. Seeing this, Johnson is instantly overcome with emotion and can’t finish the song.