A trans contestant on 'Survivor,' 1 huge mistake, and 7 ways others helped make it right.

Life is messy and complicated, but there are important lessons to be learned. 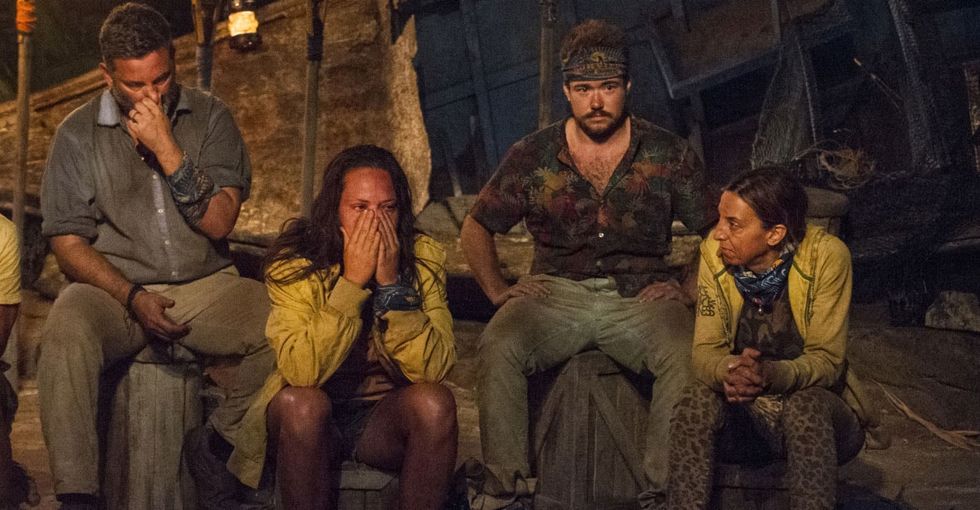 "There is deception here," Jeff Varner said. Ordinarily, on "Survivor," this would be normal. What he said next, however, wasn't.

"Why haven't you told anyone that you're transgender?" he said, looking at contestant Zeke Smith. Uh-oh.

Outing someone as transgender — even if it's for the chance to win $1 million on a reality TV show — is 100% not OK.

Luckily, this story has a (somewhat) happy ending.

Not all trans people are "out" as trans, or might only be open about it to close friends and family. Not every trans person goes around announcing they are trans — especially to millions of people on TV — nor should they feel obligated to.

That said, the idea that trans people who don't disclose being trans to everyone around them are being "deceptive" is an all-too-common trope, and it can have some really nasty consequences.

It was a shame to see Varner champion that idea, but if you look to how the other contestants reacted, it was a perfect demonstration of how to be a good ally to trans people.

1. The other contestants jumped in to let Varner know what he did wasn't OK.

When Varner asked why Zeke didn't tell the other contestants he was trans, Zeke was caught off-guard and sat in stunned silence. Thankfully, his fellow contestants spoke up, letting Varner know what he did was wrong.

2. They helped educate Varner about why outing someone is wrong.

Outing people can have very real, negative consequences. Trans people are subjected to discrimination and violence based on their gender identity, and in many states it's still legal to fire someone, deny them housing, or ban them from using restrooms because of who they are.

Understandably, many trans people carefully select who they will and won't come out to. It's a decision that should never be left up to someone else, and the other contestants let Varner know.

3. They gave Zeke the chance to speak for himself when he was ready.

"There are people who know [that I'm trans]," said Zeke. "But then I sort of got to a point where I stopped telling people because when people know that about you, that's sort of who you are. There are questions people ask. People want to know about your life. ... It sort of overwhelms everything else that they know about you."

4. They took the opportunity to grow as individuals.

"I'm just thankful that I got to know Zeke for who Zeke is. I've been with him for the last 18 days, and he's super kick-ass," said Sarah. "I'm from the Midwest, and I come from a very conservative background. It's not very diverse when it comes to a lot of gay and lesbian and transgender and things like that. I'm not exposed to it as much as most of these people are. The fact that I can love this guy so much and it doesn't change anything for me makes me realize that I've grown huge as a person."

5. They offered Zeke solidarity, making a unanimous decision to boot Varner off the show.

They didn't even have to vote. Even Varner knew, saying, "I'm ready to go." He took responsibility for his actions. He knew he made a mistake almost immediately and what the consequences would be.

6. Varner offered a heartfelt apology without condition or qualifications, and he's doing the necessary work to atone for his wrongdoing.

People make mistakes, and while we rarely have the opportunity to undo them, we can try to learn from them and make the world a better place. That's what Varner seems to be doing.

In an interview with Parade, Varner owned up to what he did:

"I just pray and hope for his safety. What I did that night was horrible. I opened him up to discrimination and to danger and to crime. Everything horrible. I robbed him of his ability to be. ... There are no excuses for what I did. Not at all."

But beyond that, he used the opportunity to speak out about what's going on in his home state of North Carolina.

"We have to stop as a society discriminating against trans people and minimizing and separating from them. ... We need to lift their voices and help them and not reduce them to body parts and surgeries and things that objectify and dehumanize them. These are wonderful people who are not only trying to live their authentic lives, but thrive. And I think stupid bathroom bills and things like that, especially in the state of North Carolina ... it’s not about bathrooms. It’s about whether trans people have the right to exist in public."

7. As for Zeke, he's trying to make the best of a bad situation. Life's messy, and forgiveness can be a complicated act.

Writing at the Hollywood Reporter, Zeke outlined exactly why what Varner did was wrong.

"In calling me deceptive, Varner invoked one of the most odious stereotypes of transgender people, a stereotype that is often used as an excuse for violence and even murder. ... I don’t believe Varner hates trans people, just as I don’t believe conservative politicians who attack trans people actually care where we use the bathroom. For both, trans people make easy targets for those looking to invoke prejudice in order to win votes."

On whether he forgives Varner:

Out of one horrible act came messy progress.