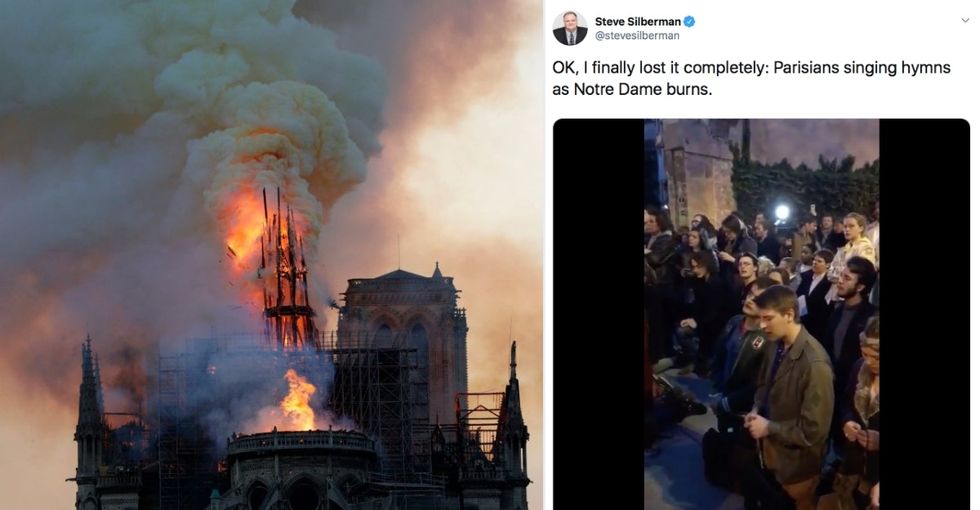 The world is watching a piece of history being destroyed before our eyes.

When news agencies began reporting that the Notre Dame cathedral had caught fire, the world held its breath. Throughout the day, we watched footage of flames enveloping the iconic structure, its grand spire collapsing, firefighters seemingly unable to control the inferno. Whether the structure could be rescued from total destruction has been unknown, though it appears now that the base structure has been saved.

Even those of us who are not Catholic and who have never visited Paris can feel this loss, as Notre Dame has been a fixture in human architecture and culture for centuries.

As Dan Rather wrote on Twitter, "Why has the burning of Notre Dame moved so many? Because we believe in beauty, majesty, faith, art, history, and the human expressions thereof. We recognize in this cathedral our common humanity. A scar now emerges in our connections to our past, our future, and each other."

It's only 37 seconds long, but a video has captured the helplessness we all feel witnessing this tragic event.

Author Steve Silberman shared a video captured by Ignacio Gil, a correspondent living in France, and it's enough to bring a tear to even the hardest of hearts.

It shows a group of Parisians singing hymns in French as they watch the 800-year-old Notre Dame cathedral burning in the distance, and it is tragically beautiful.

When there's nothing you can do but watch something beautiful burn, you stand in solidarity and sing. It's what humans do and have always done.

Hearts all over the world are with you, Paris. Vive la Notre Dame.