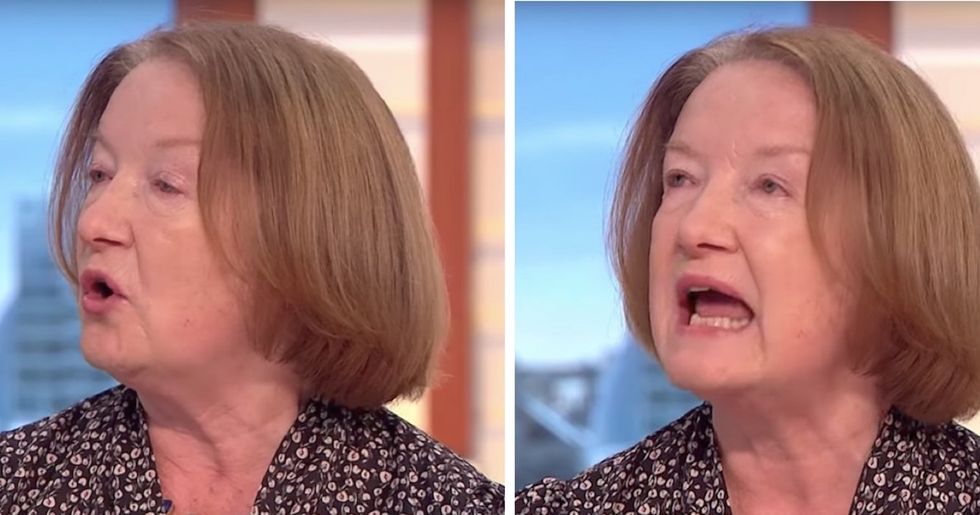 "Good Morning Britain" recently hosted two parenting experts for a fiery debate on the topic of spanking as a form of punishment.

One of the experts, Katie Ivens from the Campaign for Real Education, had some pretty strong words about why she believed physical punishment was not only OK but part of a healthy "tactile relationship":

"I'm saying we have a tactile relationship with our children; we hug them, we kiss them, we breastfeed them, and so on," she explained.

Using an example from her own life, in which she described firmly "shaking" her kids to deter them from running into the street, Ivens argued that physical punishment not only works but is good for kids, the same way breastfeeding or hugging them might be.

Yikes. Unsurprisingly, Ivens' advice is not grounded in any sort of scientific facts. (The CRE did not immediately respond to a request for comment.)

Studies on spanking show it has a negative effect on children.

Joan Durrant, a child clinical psychologist and researcher from the University of Manitoba, puts it simply: "The research is really unequivocal at this point."

Though some of the benefits of breastfeeding may be exaggerated, it's still a healthy, normal, and fruitful way for a mom to bond with her baby, all while providing vital nutrition. Spanking, on the other hand, has never, ever (did we mention ever?) been shown to have a positive outcome for children, according to Durrant.

Kids who are spanked are more likely to: show higher levels of aggression, display poorer mental health, have a worse relationship with their parents, perform worse in school, and have slower cognitive development.

"Any outcome that has ever been associated is a negative one," says Durrant. "The only thing [spanking] can do, and unreliably so, is make a child comply in the immediate situation. But the child doesn't learn anything from that."

If the science is so clear, why does physical punishment remain so prevalent?

"Good Morning Britain's" own informal poll, for example, showed over half of its viewers thought spanking was perfectly fine.

"We hand down this belief across generations," Durrant explains. "We tend to think that whatever happened to us, that's the norm, that's the way it should be. So we carry it on." She adds that corporal punishment can also be prescribed by certain religious beliefs, which are hard to change.

It's understandable why some parents would resort to hitting or spanking, especially when it comes to our kids' safety. Being a parent means being constantly on guard to keep your kids safe — so it's not hard to understand why Ivens would give her children a good shake with the intention of deterring them from running into oncoming traffic. But that doesn't mean it's the right or best way to handle that situation.

The fact remains that spanking or shaking your kids is just not a good long-term strategy and will actively work against building a healthy relationship between parent and child. There are better, healthier ways to teach your kids to avoid danger and let them know when they've done something wrong.

Durrant suggests parents embrace the role of teacher and mentor rather than disciplinarian.

"Two things that are most critical to children's learning and the parent-child relationship are what I call warmth and structure," she says.

Warmth means making your kids feel safe and supported. Imagine trying to study calculus while walking through a minefield — some environments just aren't conducive to learning. While stopping harmful behaviors in kids is important, helping them learn why and how to regulate their own behavior is the better long-term approach.

Structure means understanding that learning takes time, kids' brains can't change overnight, and simply yelling, berating, or hitting cannot speed it up. It's far better to exercise consistency in your teaching, and better yet, to consistently model the behavior you want your children to learn.

"So if one thing we want them to learn is how to regulate their emotions, the last thing we should do is show them how to hit people," Durrant says.

Hitting is not part of a healthy tactile relationship. It's not like snuggling, holding hands, or breastfeeding.

It has never, ever been shown to do anything to improve the parent-child bond, and it is counterproductive for long-term learning. It's time to listen to the science and consider effective alternatives.

It may be harder during those moments of intense frustration, but a calm and loving approach is better for everyone in the long run.

You can watch the full "Good Morning Britain" interview below: