A news station made a racist error. This anchor went off-script to apologize. 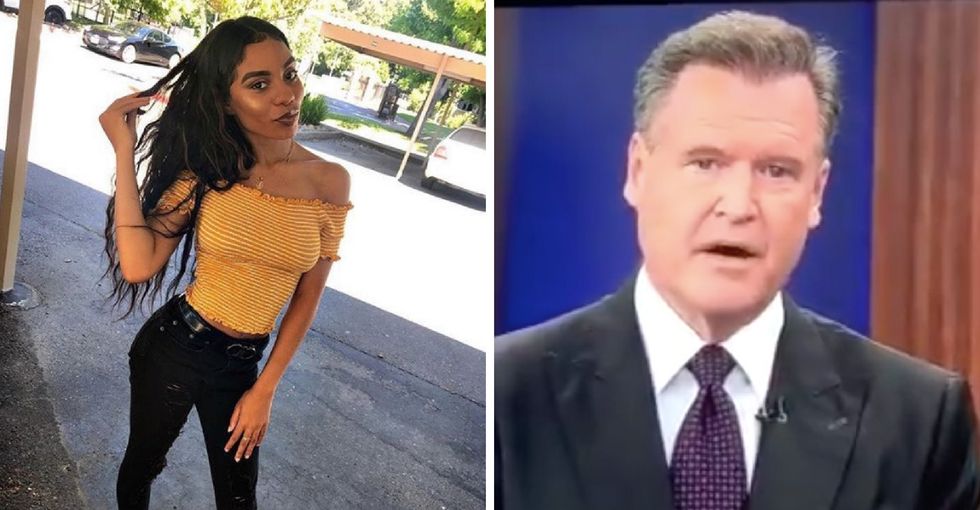 On July 22, 18-year-old Nia Wilson was murdered in a stabbing at a transit station in Oakland, California.

The teen had just stepped off a Bay Area Rapid Transit (BART) train with her two sisters, one of whom was also targeted in the incident but survived. The "prison-style attack" on Wilson, who was black, may have been a racially motivated hate crime, according to investigators.

"It's nothing imaginable, seeing your child on the BART platform with a yellow tarp over her body," said Wilson's father, Ansar Muhammad. "That is an image I'll never forget for the rest of my life."

The senseless tragedy rattled the Bay Area — and then the entire country.

Even though recently paroled John Lee Cowell — a 27-year-old white man with a violent criminal history — was arrested for the murder the following day, tensions flared across the nation.

Demonstrators in Oakland filled the streets, frustrated with law enforcement's relatively sluggish response to Wilson's death (research suggests police are slower to react when victims are people of color). Angry celebrities like Kehlani, Tegan and Sara, and Anne Hathaway elevated Wilson's story through their online platforms.

"The murder of Nia Wilson — may she rest in the power and peace she was denied here — is unspeakable AND MUST NOT be met with silence," Hathaway wrote on Instagram. "She is not a hashtag; she was a black woman and she was murdered in cold blood by a white man."

Outraged and heartbroken about #NiaWilson Tonight I can’t stop thinking about Nia’s sister, her family, friends and… https://t.co/QOykUOrNen
— Tegan and Sara (@Tegan and Sara)1532497924.0

Many photos of the 18-year-old — who'd been planning a future career in the beauty or music industries or possibly the Army — were plucked from her social media accounts and shared by outraged sympathizers.

Out of all of Wilson's photos, however, a Bay Area news station chose the absolute wrong one to use in their coverage.

In the photo used by KTVU News, Wilson appeared to be holding a gun. She wasn't, to be clear: The item in her hand was a cellphone case shaped in the form of a gun.

But the damage had already been done.

This may seem like a non-issue to some people (particularly white folks), but it reflects a much larger systemic problem concerning media portrayals of black and brown people in the U.S.

The news media often portrays people of color as inherently more violent — even when they're the victims of crimes.

White criminals, on the other hand, seem to benefit from their skin color.

Just look at convicted rapist Brock Turner, a white man who's habitually referred to in headlines as a "Stanford swimmer" and complemented with flattering photos. Compare that to much of the coverage surrounding slain, innocent 17-year-old Trayvon Martin, whose "thug" outfit and cannabis use apparently justified his killing.

These aren't isolated lapses in judgment. They're part of a much larger news media system that portrays people of color differently than white people.

The photo KTVU used in its broadcast reinforced negative stereotypes and contributed to this problem, according to the National Association of Black Journalists.

"There's no justification for KTVU's airing of a photo of her apparently holding a fake gun cellphone case," the group's president, Sarah Glover, told Poynter. "KTVU victimized her twice by airing an image that puts her in a negative light and that also has nothing to do with her death."

Fortunately, KTVU quickly acknowledged its failure and apologized for featuring the problematic photo of Wilson.

"There's no doubt we made a mistake," Somerville said. "It never should have happened. But we made the mistake, and we are owning up to that mistake."

"Nia was a just beautiful young woman. And I can only hope right now that her family and her parents are watching so that they can see me and all of us here at Channel 2 say that we are so sorry about what happened to your daughter, and we are sorry about the mistake that we made today."

Somerville, with the encouragement of the station's news director, also took to his Facebook page to address the issue.

He may not have been involved in choosing the photo, Somerville noted in a post, but that's irrelevant.

"There is no excuse for [what] we did. Repeat: No excuse!" Somerville wrote. "We NEVER should have used that picture. It was a huge mistake on our part."

I wanted to take a moment and apologize for a picture that KTVU showed on the air for several seconds today about the...

Even when it's done unintentionally, the media can get it wrong in big ways.

So when a news source does, it should confront the mistake and vow to do better. The more we talk about the flawed portrayals of people of color in the world around us, the more we can change the problem for the better.

Nothing can bring back Wilson. But her family deserves the world to remember her as the helpful, bright, big dreamer she was.