A NASA scientist shares his greatest hope for the future of earth.

"It's indisputable. It's very solid physics" 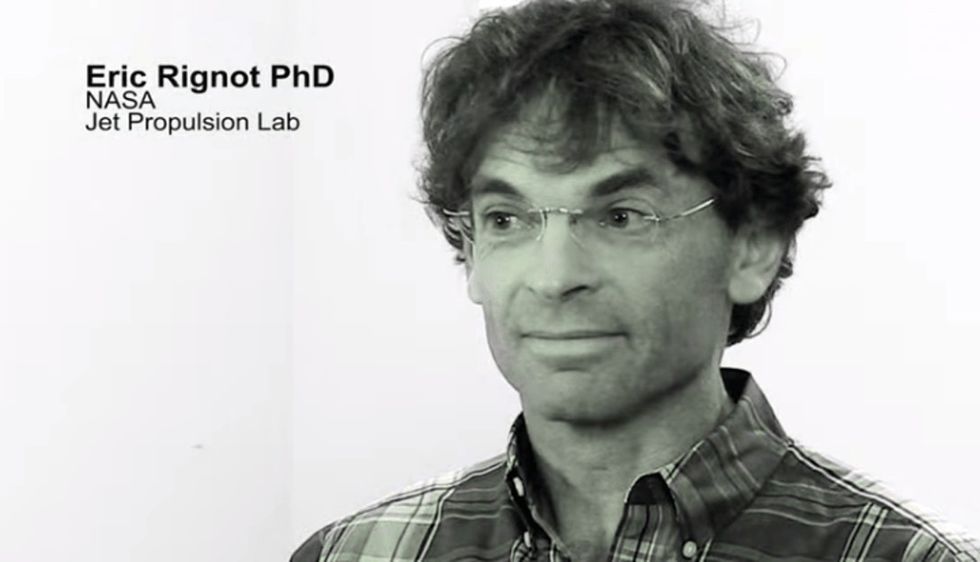 Eric Rignot, a NASA scientist, has a very important job — one most of us would struggle to fully understand.

According to his NASA profile, his work focuses on the "geoscience applications of radar interferometry and polarimetry." (See what I mean?) Basically, what all that means is he studies what's happening to the earth's surfaces...

...surfaces such as ice sheets, which are dissolving at an accelerated rate due to climate warming from our use of fossil fuels.

Antarctica's Larsen B ice shelf has existed for 10,000 years. In 2002, two-thirds of the shelf collapsed into the ocean over the span of six weeks. Researchers estimate the remaining portion will only hold for a few more years. GIF via NASA Jet Propulsion Laboratory.

As complex as Rignot's work may be, he wants us to know why it's relevant to all our lives.

In a two-minute elevator speech with Greenman Studio, Rignot explains that rising temperatures are making the weather crazier and sea levels higher, which affects everything from where people can live to our food production, and even the number of species left on earth.

But we shouldn't be surprised. Rignot says science has warned about this for a long time:

"The first thing about climate warming is that the physical basis, we've known it for centuries. This is nothing new in the science of climate change today. You bring more CO2, more greenhouse gases in the atmosphere, it warms it up. It's indisputable. It's very solid physics."
— Dr. Eric Rignot

At 1:08 in the video, Rignot says something that took a few minutes to hit me:

"We didn't leave the Stone Age because we ran out of stone."

It's true. The Stone Age gave way to the adoption of a new technology: metals. (Now hold that thought.)

Climate catastrophe is starting to seem inevitable, but Rignot has one last hope: young people.

"To change everything, it takes everyone." Image via South Bend Voice/Flickr.

If running out of stone isn't why we left the Stone Age, what's keeping us from leaving the Oil Age?

Keep Reading Show less
science
Get stories worth sharing delivered to your inbox
By signing up you agree to Upworthy's privacy policy.
Trending Stories
women
popular