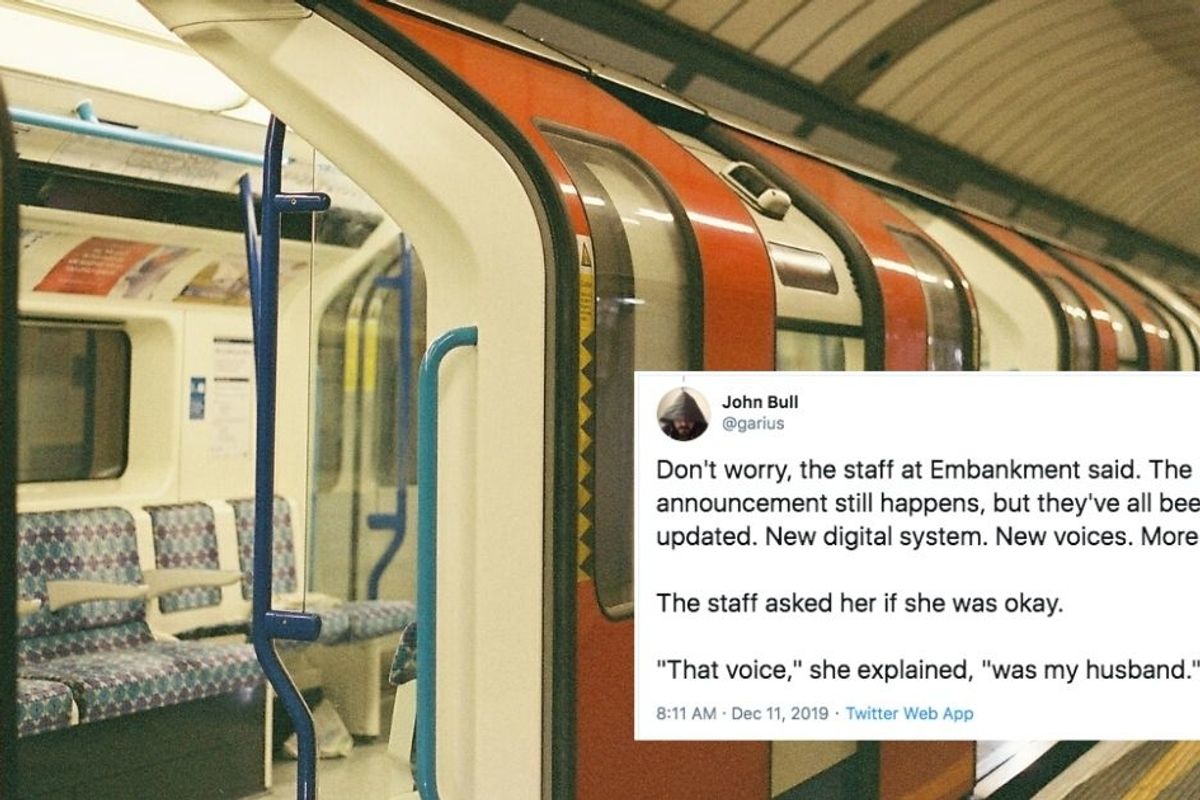 If you travel on the subway in the London Underground, you'll hear various automated recordings of instructions and announcements for passengers. But at one stop, one instruction stands out from the rest—a unique voice warning people to "Mind the gap."

It's not actually new. The same voice issued the same warning for decades, but was replaced in 2012 when the Underground installed a new digital system.

Weeks later, though, it was back. Why? Because kind Underground workers wanted to help a grieving widow who missed hearing her late husband's voice.

RELATED: Viral stories of people helping strangers pay for groceries are inspiring other acts of kindness

The story of the voice at the Embankment Tube station was shared on Twitter by writer and historian John Bull, and its pure sweetness has people everywhere "cutting onions."

Bull introduced the story about "London, trains, love and loss, and how small acts of kindness matter," then wrote in a long thread:

"Just before Christmas 2012, staff at Embankment Tube station were approached by a woman who was very upset.

She kept asking them where the voice had gone. They weren't sure what she meant.

The voice, she said. The man who says 'Mind the Gap.'

The staff asked her if she was okay.

'That voice,' she explained, 'was my husband.'

The woman, a GP called Dr Margaret McCollum, explained that her husband was an actor called Oswald Laurence. Oswald had never become famous, but he HAD been the chap who had recorded all the Northern Line announcements back in the seventies.

Oswald's death had left a hole in Margaret's heart. But one thing had helped. Every day, on her way to work, she got to hear his voice.

Sometimes, when it hurt too much, she explained, she'd just sit on the platform at Embankment and listen to the announcements for a bit longer.

For five years, this had become her routine. She knew he wasn't really there but his voice - the memory of him - was.

To everyone else, it had just been another announcement. To HER it had been the ghost of the man she still loved.

And now even that had gone.

The staff at Embankment were apologetic, but the whole Underground had this new digital system, it just had to be done. They promised, though, that if the old recordings existed, they'd try and find a copy for her.

Margaret knew this was unlikely, but thanked them anyway.

RELATED: An Irish school is ditching homework for a month, assigning 'acts of kindness' instead

In the New Year, Margaret McCollum sat on Embankment Station, on her way to work.

And over the speakers she heard a familiar voice. The voice of a man she had loved so much, and never thought she'd hear again.

Because it turned out a LOT of people at Embankment, within London Underground, within @TfL and beyond had lost loved ones and wished they could hear them again.

And they'd all realised that with luck, just this once, for one person, they might be able to make that happen.

Archives were searched, old tapes found and restored. More people had worked to digitize them. Others had waded through the code of the announcement system to alter it while still more had sorted out the paperwork and got exemptions.

And together they made Oswald talk again."

According to an article in the Metro, Margaret was also given a CD of Oswald's voice recordings. Beautiful.

Such stories of human connection and kindness are what renew our faith in humanity and remind us that a little kindness can go a long way.

Now pardon me while I go replace my box of tissues.