A food writer shared a neat cooking tip, but got a flood of hate and mockery in return. 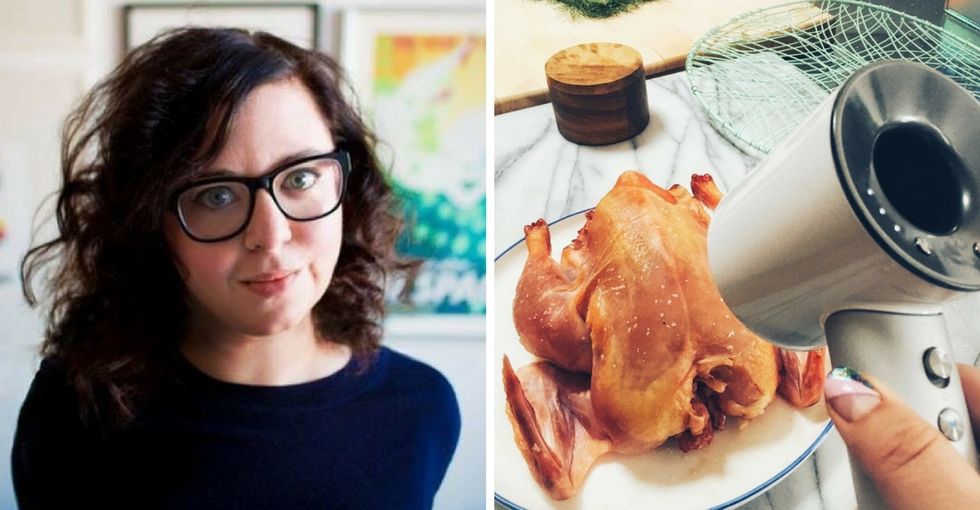 Stuck inside on a snow day, Rosner shared a photo of the process she uses to remove moisture from a chicken before roasting it: a bit of time under her hair dryer. It might seem unconventional, but it's actually a well-established method for getting the skin perfectly crispy.

Sadly, the internet didn't seem to know this — or care.

Happy snow day, I am using an astonishingly expensive hair dryer to remove all moisture from a chicken to maximize… https://t.co/xg29DrpyrK
— Helen Rosner (@Helen Rosner)1521647172.0

Some of the responses got a bit rude, which led Rosner to write an article titled, "Yes, I use a hair dryer to make roast chicken — here's the recipe" to clarify a few things.

She explained to me what bothered her a bit about the responses, something many writers can relate to, saying, "I took a picture of the process and posted it to Twitter, where people were, in roughly even groups, thrilled or repulsed by the sight of a beauty appliance in the kitchen. There was, in particular, no shortage of men (why is it always men?) sneering at my incompetence."

She continues, "'This is what your oven is for,' a few said, apparently thinking that I was using the dryer not to dry the chicken but to cook it. They lingered on my choice of hair dryer—the Dyson Supersonic, a futuristic-looking device that is, at four hundred dollars, absurdly expensive. (It’s also inarguably better than any other blow-dryer I’ve tried, though whether its uptick in quality is worth the several-hundred-dollar premium is a private matter between a person and her credit card.) And they commented on my sparkly pink manicure—maybe, if I’d wanted the tweet to read as an Alton Brown-calibre kitchen hack, instead of ditzy prop comedy, I should’ve gone for unvarnished nails and a hairier knuckle."

Rosner's story (which came with a recipe that looks absolutely delicious) was meant to quiet the trolls and clear up some misconceptions, but seemed to only result in more hate being thrown her way. Michael Harriot at The Root called the dish "the whitest thing on the internet" in an unrelentingly cruel blog post. Alexandra Deabler's Fox News article emphasized the cost of Rosner's dryer, as did Danielle Fowler's write-up at Yahoo.

Rosner spoke with me about the bizarre backlash to the totally innocuous food tip, sharing a bit of her thoughts on what it's like to be a woman writing on the internet.

The internet, for all the good it does, can enable what's known as "context collapse." Details get left out, facts get blurred, and words get twisted in ways they otherwise shouldn't.

In Rosner's case, some of the backlash seemed to be from people who thought she was recommending everyone go out and drop $400 on a blow-dryer, or else they mistakenly thought she was suggesting that you should actually use the blow-dryer to cook the chicken (please do not try to cook an entire chicken with a blow-dryer; it will not work and you could get sick).

None of that was true, but it's the new normal in an age where everything posted to the internet has the potential to become content.

"Ideas get divorced from the people expressing them, and often knowing who's saying something can help you know how to judge the idea," she says. "When headlines in the NY Post or on Yahoo Lifestyle say things like 'Woman Uses a Hair Dryer to Cook Chicken,' even looking past the fact that I don't use the dryer to cook the damn chicken, by stripping out the context of who the hell this woman is, you open a door for the reader to immediately jump to skepticism and judgment. They could've gone with 'food writer uses a hair dryer to cook chicken' (or hell, 'award-winning food writer' also works) and then the reader response is tempered by position expertise."

To that last point, Rosner clarifies that she shouldn't have to be a highly credentialed food writer in order to share a cool tip without a flood of mockery being sent her way. The desire to pick other people apart over the tiniest things, such as how they make their roast chicken, has become a core part of internet culture, and it's not good for us.

At first Rosner was reluctant to respond to some of the harsher criticism, but then she noticed something.

She was irritated, understandably, by some of the inaccuracies pushed by her critics. At first she chalked it up to ignorance, but then she realized that some of her harshest critics knew exactly what they were doing.

"I saw a lot of people responding to that post by calling it sexist, and something clicked for me," she told me. "I'd been scrambling around trying to get strangers on the internet to understand that they were misreading or misrepresenting what the technique actually involved, and that actually I'm not full of shit, but the truth is — they just didn't care. They didn't want to be accurate; they just wanted to feign outrage. And so, so, so much of that outrage was really starkly gendered — the way that we, as a culture, assume that men know what they're talking about, but if the person speaking isn't a man, there's no such thing as the benefit of the doubt."

I cannot fucking believe so many people would let their internalized sexism stand between them and BETTER FUCKING CHICKEN but here we are
— Helen Rosner (@Helen Rosner)1522274616.0

She wonders how different the response might have been had the person posting the original tweet were a guy. The fact that celebrity chefs like Alton Brown have been promoting this technique for years without outrage probably gives us an answer to that question.

"There's some kind of perfect synthesis in there of my own femininity, the femininity of a hair dryer as an appliance, and the perceived frivolousness of a feminine-coded appliance costing a few hundred dollars," she says. "So much of the response to this basically boiled down to 'Look at this ditzy lady doing a stupid thing,' which is just plain incorrect. What I did was really smart and has a lot of science behind it — it works, and it works well. You're gonna respond to a tested, vetted, effective technique — one that uses tools you probably already have in your home — with knee-jerk sexist mockery? At the end of the day, I don't think I'm the one who looks stupid here."

There are some important lessons in all of this about the internet, unconscious bias, assumptions, and empathy.

It's easy to jump to assumptions, whether it's assuming a woman on the internet with a blow-dryer doesn't know what she's doing when it comes to chicken or making snap judgments about other people's personal experiences. Those assumptions lead us to build up fictionalized versions of the people we see and we can come off cruel in the process. Ordinary context clues that you might be able to pick up from in-person conversations are lost behind keyboards.

We could all benefit from taking a few deep breaths and asking ourselves whether there's a possibility that we don't have all the information needed to offer an opinion on a topic and whether we really need to give someone doing something — like, say, offering a tip for cooking chicken — such a hard time about it?