Age is just a number, and love goes the distance. 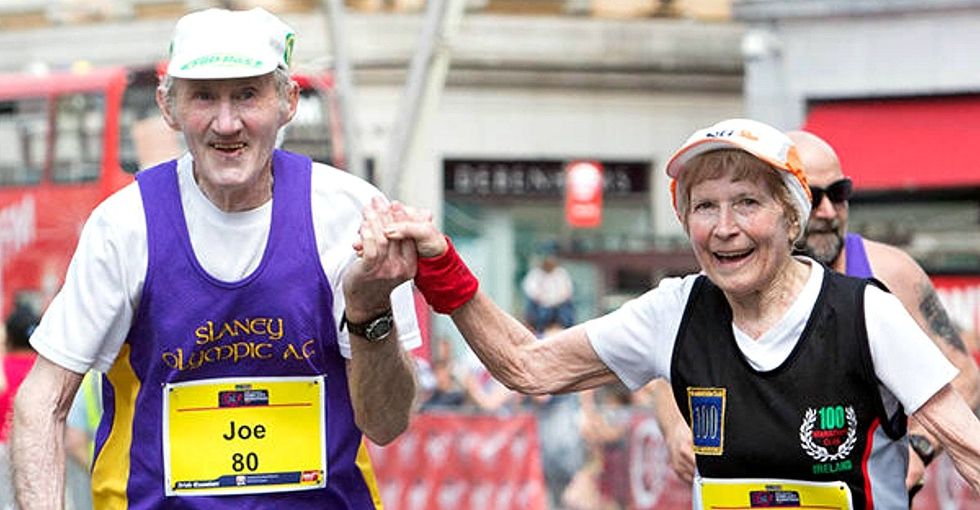 Getting older can come with a lot of difficulties. But perhaps the greatest is dealing with weird assumptions about things you can or can't do just because you've lived on this planet longer than others.

Unless, that is, you opt to simply leave those misconceptions in the dust.

That's what 80-year-old Kay and Joe O'Regan did when they decided to start running marathons at age 50.

Here they are crossing their first finish line together in 1986, alongside their most recent hand-in-hand victory:

But the O'Regans aren't just finishing marathons — they're snagging first place in their age brackets. In the Cork City Marathon, which took place on June 6, 2016, they had the fastest time for their group: 5:25:29.

Even though they took up running later in life, that hasn't stopped them from quite literally going the distance.

Joe has run in 29 marathons since 1986, but Kay has massively outpaced him with a whopping 113 marathons under her belt. She's won the Irish National Marathon Championships several times and has broken records too: Her time at the Cork City Marathon earned her the status of fastest 80-year-old woman in the United Kingdom.

While the couple has run many races together and separately, they ran both their first and their most recent (which will also be their last) holding hands.

Kay told People that she thought holding hands definitely helped give Joe the little burst of energy he needed to make it across the finish line — which just goes to show that even in a marriage 57 years strong, love is still key to getting through life.

Aside from their adorable finish, Joe and Kay said they don't see themselves as extraordinary in the slightest.

"Running is just something we do," Joe told Runner's World.

These octogenarians are proof that people are capable of amazing things at any age.

The O'Regans are far from the only ones demonstrating that through their hobbies.

86-year-old Yvonne Dowlen has been figure skating since she was 16. Even when she got a bad concussion at 80 and her doctor told her to hang up her skates, she pushed through and still manages to train for an hour every day.

No big deal, but 78-year-old Shirley Webb can deadlift 237 pounds and recently set the deadlift record in Illinois.

So yes, sure, for some people life might get slower with age. But these folks are living proof that it doesn't have to.

It doesn't mean you need to complete crazy feats of strength and endurance to stay fit and healthy. But if you like to be active, it's important to keep pushing yourself forward in order for your body to keep up with your goals.

And of course, it doesn't hurt to have a loving running body cheering you on.