8 badass Jews who gave Nazis exactly what they deserved and then some. 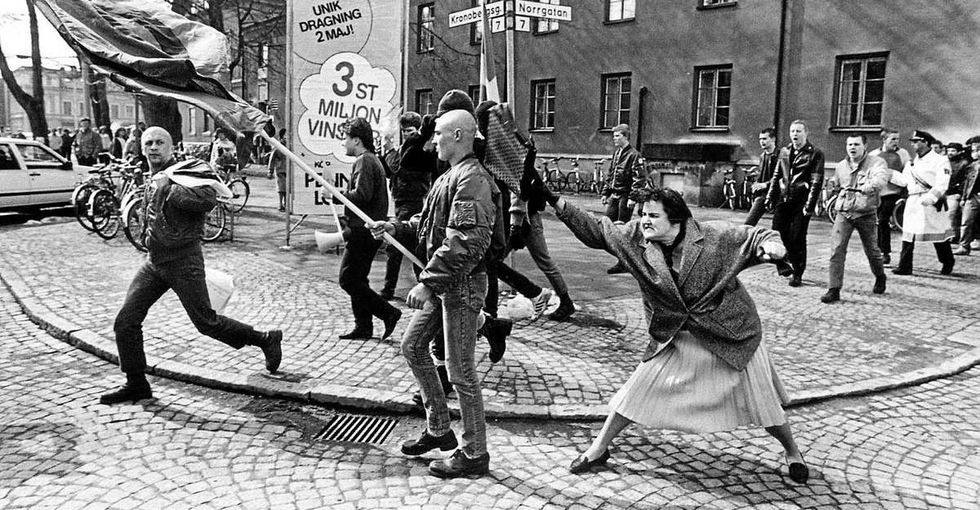 Hanukkah is almost upon us, and this year, it's not just about latkes, jelly doughnuts, and exchanging disappointing gifts.

At a time of great uncertainty and fear — when swastikas are popping up in public parks, incoming government officials are not quite denying that they maybe might start putting all the people who follow a disfavored religion of their choosing on a list, and neo-Nazis are donning fedoras and mingling over chicken parm sliders at swanky D.C. chain restaurants, we (((Jews))) need to take a lesson from our Maccabee forefathers, bust out our dreidels-of-sneaky-plotting, and gear ourselves up to reject darkness and resist oppression as forcefully and righteously as we can.

Fortunately, rejecting darkness and resisting oppression as forcefully and righteously as we can is kind of our thing.

To refresh our memories and lay on some much-needed inspiration, here are eight stories of badass Jews who fought back against fascism — one for each night of Hanukkah:

1. William Cohen, who helped unite Jews in America against Hitler

In 1933, while much of America's political leaders were busy convincing themselves that the Nazis were just passionate about stretching their triceps, Cohen, a former U.S. congressman from New York, prominently endorsed a boycott of German goods.

"Any Jew buying one penny’s worth of merchandise made in Germany is a traitor to his people," Cohen announced at a meeting of the Jewish War Veterans. While the boycott (obviously) failed to stop the Nazis, it helped galvanize Jewish resistance in the United States and frame opposition to the regime as a moral duty.

2. Danuta Danielsson, who treated Swedish neo-Nazis with an appropriate lack of respect in the 1980s

Here's what we know about Danuta Danielsson:

Danielsson never talked about the incident and passed away three years later, so we'll never know why she did it, but "hitting Nazis for revenge is fun and good" is probably as close a guess we'll ever get, and, you know what?

3. Leon Feldhendler and 4. Alex Pechersky, who helped shut down a concentration camp

On Oct. 14, 1943, Feldhendler, a Jewish council leader in the Zolkiew ghetto, and Pechersky, a Russian-Jewish soldier, led 300 of their fellow prisoners on a daring, improbable escape from the Sobibor concentration camp — the largest such prisoner escape of the war. Though only roughly 50 of the escapees survived the next two years, the camp was forced to shut down in the wake of the revolt.

Both Feldhendler and Pechersky lived to the see the Nazis kicked out of their respective homelands, though Feldhendler was killed in an ambush by right-wing Poles in early 1945. The two were instrumental in making a lot of Nazis sad and/or dead, a legacy that was, ultimately, memorialized in the 1987 film "Escape from Sobibor."

A photographer by trade, Schulman was initially recruited to take pictures for the Nazis when they invaded her Polish hometown in 1941. Determined to find clients less likely to enslave and, eventually, murder her, she fled into the woods, where she convinced a group of partisans to let her embed.

She spent the next two years taking pictures, documenting the day-to-day activities of the resistance. Because there were no craft stores in the woods, she made her own solutions to develop her photos.

Schulman preserved her photos through the end of the war and beyond, eventually entering them into the historical record as proof of that there was defiance behind Nazi lines from Jews and non-Jews alike.

6. Simon Wiesenthal, who tracked down Nazis after the war to bring them to justice

Simon Weisenthal. Photo by Rob Bogaerts/Anefo/National Archives of the Netherlands.

A death camp survivor, Wiesenthal survived the murder of most of his family, separation from his wife, and a brutal forced march that nearly claimed his life in the years following Hitler's invasion of his native Poland. After the war, he settled in Linz, Austria, and dedicated his life to a single, glorious goal: hunting Nazis.

Wiesenthal chased Nazis all over the world — first as a freelancer (somehow, Wiesenthal even managed to make the gig economy seem badass) and eventually through his organization, the Jewish Documentation Center. He tracked down Adolf Eichmann in Argentina; Franz Stangl, the commandant of Treblinka, in Brazil; and Karl Silberbauer, the gestapo agent who arrested Anne Frank, in Austria. He helped put dozens of former SS agents on trial in West Germany. And presumably, he did it all while feeling absolutely 100% great about himself and having no regrets, ultimately passing away at a ripe old age while, it would stand to reason, shredding a killer solo on an electric guitar. He was just that badass.

7. Vidal Sassoon, who threw down with British fascists in a series of bloody street fights

Yes, that Vidal Sassoon. Only one year after World War II ended in Europe, a group of British fascists, led by Oswald Moseley, attempted to rebuild their political movement by spreading fear of "aliens" — code for refugee Jews living in the U.K.

The famous hair stylist, then a teenager, was part of an underground movement of British ex-service members who grabbed knives and razor blades and punched, kicked, and slashed Moseley's thugs on the streets of East London until they gave up and crawled back down the hole they slithered out of.

That Vidal Sassoon brand shampoo that's been sitting, half-full, in your downstairs shower? That's right. That's the shampoo of justice.

8. Gertrude Boyarski, who literally burned a bridge between Nazi soldiers and the food they needed

"I want to fight and take revenge for my whole family" would not be a totally out-of-place thing for Liam Neeson to say at the beginning of a film where he teams up with a wolf to kill the man who ran over his aunt with a train. Instead, those words came from the lips of Boyarski, who actually spoke them to a Russian commander after her parents and siblings were killed by German soldiers in the Polish woods.

With vengeance on her mind, Boyarski teamed up with the Soviet partisans to create as much Nazi pain and misery as humanly possible for the next few years. According to the former partisan, she and a comrade personally set fire to a bridge used by Germans to transport food and supplies, were discovered, and subsequently were shot at.

When the bridge failed to burn fast enough, they tore parts of the flaming bridge apart with their bare hands while Hitler's troops tried in vain to machine gun them in the face.

How many Nazi bridges has your grandma burned down? (Seriously, we should get our grandmothers together and ask them.)

While our ancestors did a heckuva job sticking it to fascism, when the last candle burns down this year, there will still be more fight to be fought.

Want to join up?

You can donate some of that Hanukkah gelt to the ACLU, Immigration Rescue Committee, Muslim Public Affairs Council, and Anti-Defamation League.

Unfortunately, they don't accept tube socks, so you're stuck with those.