7 new nontraditional Empathy Cards that say what other cards can get totally wrong. 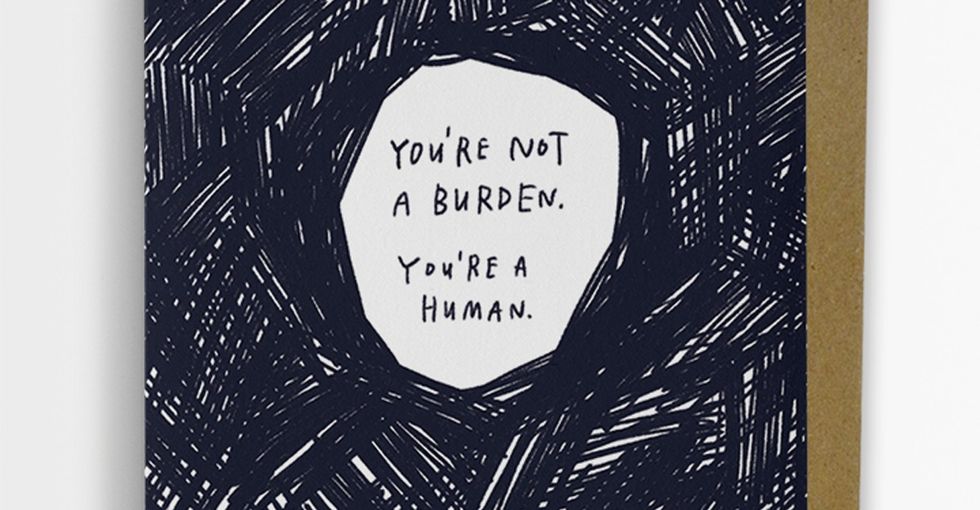 Back in May, Emily McDowell Studio released an incredible line of Empathy Cards.

As a cancer survivor, McDowell had been on the receiving end of some good-intentioned wishes that were a little, well, tone-deaf. She wanted to help people find the right thing to say to friends and loved ones going through tough times ... and she totally nailed it. The cards had messages like:

"Please let me be the first person to punch the next person who tells you everything happens for a reason. I'm sorry you're going through this."

"I'm so sorry you're sick. I want you to know that I will never try to sell you on some random treatment I read about on the internet."

The cards were a hit — more than she ever could have anticipated.

"It was mind-blowing, the amount of people these resonated with," Emily told me in a phone interview. Truly humbled by the thousands of emails that poured in from folks, telling her how much these cards meant to them, she set out to create another set.

These seven new Empathy Cards are perfect for a broad range of people we care about who are experiencing illness, hardship, grief, loss, and more.

With humor and smarts, they tackle some of the most common clichés that get tossed around in tough times:

McDowell explained that she asked her friend McInerny Purmort to help with this card. Purmort blogs at My Husband's Tumor and recently lost her husband to brain cancer, so she unfortunately had a lot of experience to draw on when coming up with the right words to offer someone experiencing grief. Emily McDowell Studio.

3. What Doesn't Kill You

4. Laughter Is the Best Medicine

6. Take Away Your Pain

McDowell wanted this line of cards to work for people experiencing all sorts of challenges, including mental illness. "I've had depression since I was 11 and I'm almost 40," she told me. "I started taking Prozac when it first came out when I was a kid." She designed this card as an option to share with someone experiencing a mental illness. Emily McDowell Studio.

These are all pretty amazing, right?

Like the first round of Empathy Cards, McDowell hopes these will help fill a rather gaping hole in the market.

Historically, she says, sympathy cards tend to read "like they were written by someone who got the assignment to write a card about X." That's exactly what she didn't want to do when creating her line. Based on the response, it's safe to say she succeeded.

McDowell's company received around 15,000 emails in response to the first line they released.

"It was amazing," she said. "And I tried for a long time to respond to everybody. ... People were sharing very personal, important stories." Eventually, McDowell realized she wouldn't be able to send individual replies to everyone, but she was incredibly touched.

She told me that what really struck her is who sent the emails. About half were from people who had friends or family members going through hard times and felt like they had failed in their responses. She explained that people would tell her:

"'I wasn't able to figure out what to say. I've been sitting here, feeling awful about that for X amount of time and these cards gave me a way to reconnect with that person. I was able to explain — not justify — how I disappeared. Apologize and explain it — and use these as a bridge to have that conversation.'"

The other half of the messages came from people who were ill or who had lost someone. McDowell said they told her: "It feels like I'm being seen. It feels like it validates my reality. This is the first time I've seen something that makes me feel normal." Every one of these messages had an impact on McDowell. "Both of those things were so meaningful to hear," she told me.

When people we care about are going through tough times, it's not easy to know what to say...

When McDowell created the first line of cards, she shared the following:

"The most difficult part of my illness wasn't losing my hair, or being erroneously called 'sir' by Starbucks baristas, or sickness from chemo. It was the loneliness and isolation I felt when many of my close friends and family members disappeared because they didn't know what to say or said the absolute wrong thing without realizing it."

How great is it that we now have cards we can share with the people we love so they don't end up feeling like that? I'm so glad these exist.