7 families who lost loved ones that Trump also should have invited to his joint address. 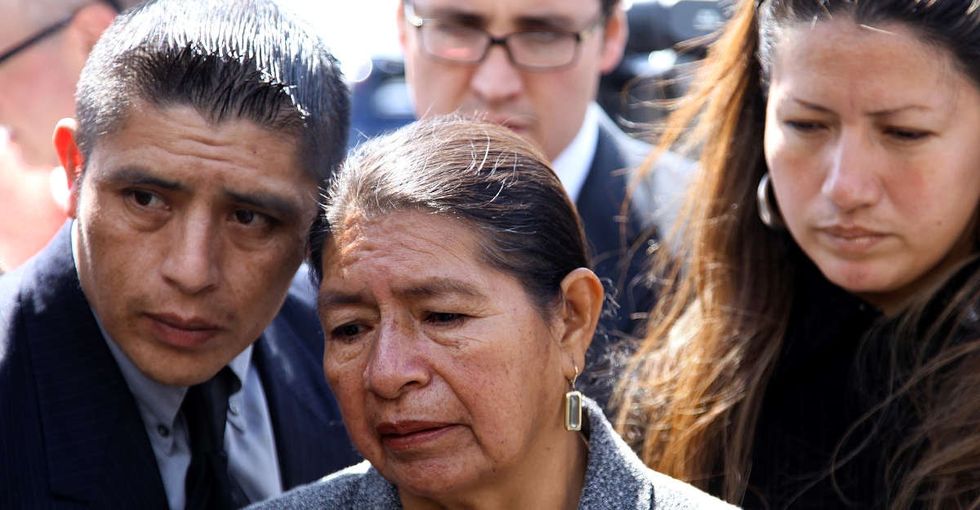 As controversy over Donald Trump's immigration executive order continues to swirl, in his first-ever joint speech to Congress, he addressed his personal guests Jamiel Shaw, Jessica Davis, and Susan Oliver — whose family members were killed by undocumented immigrants.

"To any in Congress who do not believe we should enforce our laws, I would ask you this one question," the president said. "What would you say to the American family that loses their jobs, their income, or their loved one because America refused to uphold its laws and defend its borders?"

It's impossible not to feel for those who have lost loved ones to senseless acts of violence.

The urge to make meaning and place blame in the wake of a tragedy is powerful. But for the president to exploit these families by grouping them together and focusing on the perpetrators' immigration status sends a dishonest and destructive message: that undocumented immigrants are inherently violent, criminal, and not to be trusted.

We can litigate this until we're blue in the face, but it won't change the fact that the president's message is not just damaging — it's wrong. Studies show that immigrants commit crimes at lower rates than U.S. citizens, and, more anecdotally, that the same goes for undocumented immigrants.

Not only are immigrant families touched by violent crime just as often as the families of those who are born in the U.S. — many are specifically targeted because of their immigrant status.

If President Trump truly wanted to use his first speech to Congress to honor families whose loved ones have died senselessly and tragically, he could have also invited...

1. The family of Srinivas Kuchibholta, an engineer from India who was murdered at a bar in Olathe, Kansas, last week.

His assailant allegedly yelled, "Get out of my country" before fatally shooting him.

2. The family of Luis Ramirez, an undocumented immigrant from Mexico who was beaten to death by four high school football players in Shenandoah, Pennsylvania, in 2008.

One purportedly told the 25-year-old factory and field worker to, "Tell your Mexican friends to get the fuck out of Shenandoah."

3. The family of Won-Joon Yoon, a Korean graduate student, who was murdered by a white supremacist while pursuing a computer science degree at Indiana University.

4. The family and friends of Hussain Saeed Alnahdi, a Saudi student at the University of Wisconsin-Stout, who died from his injuries after being attacked during a night out in October.

5. The family of Marcelo Lucero, an Ecuadorian immigrant killed by teenagers in Patchogue, New York, in 2008, as part of a game called "beaner-hopping," where the group would hunt and beat local Latino men.

6. The family of Arlindo Goncalves, a 72-year-old, homeless, Cape Verdean immigrant, who was killed by a self-proclaimed neo-Nazi, in 2009.

7. The family of Joseph Ileto, a postal worker originally from the Philippines, who was killed by a white supremacist during a shooting spree at a Jewish Community Center.

For President Trump to highlight the few heinous crimes committed by a vanishingly small number of undocumented immigrants while ignoring the violence committed against the broader immigrant community is shameful.

"As we speak tonight, we are removing gang members, drug dealers, and criminals that threaten our communities and prey on our very innocent citizens," President Trump declared. He went on to propose a new office — Victims of Immigration Crime Enforcement — to serve victims of violent crime committed by undocumented immigrants.

But immigrants, like the rest of us, aren't, for the most part, "gang members, drug dealers, and criminals" — they're just people. And just like U.S.-born citizens, a tiny fraction of them do horrible, unforgivable things — though, it bears repeating, at a lower rate than those who were born here.

Immigrants who commit deadly crimes don't represent the vast majority who just want to live their lives and raise their families in peace and security, and not be hassled — or worse — for it.

It's perfectly reasonable to argue for stronger enforcement of immigration laws — in a humane, fact-based manner.

It's not OK to implicitly label all undocumented immigrants "killers" and "thugs."

If President Trump truly wants to make America great, he can start by acknowledging that whether or not we were born here or came here with the right paperwork in order, we're all human. And we all deserve to feel safe.