6 insane conspiracy theories that actually turned out to be true. 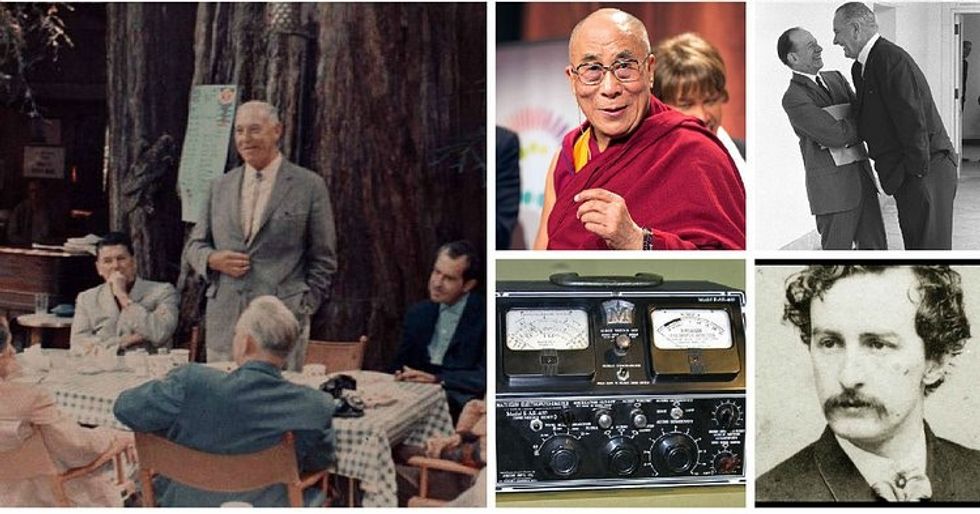 It’s feeling harder and harder to separate truth from fiction in the age of fake news.

But conspiracy theories and propaganda are as old as society itself. Perhaps most disturbing of all is the growing wealth of scientific evidence suggesting that we’re influenced even by news we know to be fake.

How many disproven JFK assassination theories are floating around in your brain thanks to Oliver Stone? Do you sometimes wonder if anyone has ever really landed on the Moon? And do you think just maybe it’s possible that Adolf Hitler actually survived World War II and lived out his days in Brazil? If so, you’re not alone.

And that’s to say nothing of more modern conspiracy theories driven by social media, making unfounded claims about everything from diets to money to the state of reality itself.

But sometimes the wildest conspiracies are true. Like these six seemingly insane conspiracy theories that are quite real:

Who doesn’t love Canada? Well, 1960’s Canada wasn’t quite the squishy utopia it seems to be today. The Canadian government hired Carleton University professor Frank Robert Wake to create something it maliciously called the “fruit machine,” which they believed could detect and identify gay men. It wasn’t part of some benign effort to understand human sexuality.

It was part of a sick bit of McCarthyism with the stated goal of getting all gay men out of the country’s government.

Back in the 1950s the CIA secretly dosed individuals with LSD in order to test the potential effects of mind control. Although the practice reportedly continued for two decades, it was launched before the drug movement of the 1960s made LSD into a popular counterculture symbol. And while being given some free acid might sound like a great time to some, or at least the plot to a bad hipster action movie, dozens of people were reportedly left with permanent disabilities after secretly being subjected to massive amounts of LSD and electroshock therapy after seeking treatment for “minor psychiatric complaints.”

3. The Gulf of Tonkin incident

On August 2, 1964, the USS. Maddox opened fire on what it later claimed were several North Vietnamese targets. The skirmish deepened America’s involvement in the Vietnam War, leading to the death of thousands of U.S. soldiers and many more Vietnamese, including hundreds of thousands of civilians. Except, it turned out the “targets” the Maddox fired upon didn’t actually exist. It’s still debated today whether the incident was an intentional misdirection by the military. But one thing is certain: President Johnson’s original claim that the North Vietnamese fired first has been debunked. Even former Defense Secretary Robert McNamara admitted as much in an interview before his death. After all, it’s kind of hard to start a fight when you’re not even there.

A secretive organization of people that control the world? Well, it turns out it does exist and many of its members are powerful world leaders and titans of industry. The real action happens at Bohemian Grove, which appears to primarily exist as a place, “where the rich and powerful go to misbehave” according to The Washington Post.

Or, alternatively, to hear it from the group directly, where members, “share a passion for the outdoors, music, and theater.”However, along with more traditional fare such as drinking and big dinners, the regular activities also reportedly include performing rituals before a giant wooden owl, according to The Post.

Owners of the property host a two-week retreat in California each year for some of the wealthiest and most influential Americans. Past attendees include Richard Nixon and Ronald Reagan, both of whom attended before entering the White House. Oh, and it’s where the idea for the atomic bomb was first sketched out.

Who doesn’t love the Dalai Lama?

Other than the Chinese government.

Even the CIA can’t get enough of His Holiness and his band of Tibetan resistance fighters. That’s because during the 1960s, the CIA allegedly funneled millions of dollars to the Tibetan Resistance, including what some claim was a six-figure annual “salary” that went directly to the Dalai Lama himself (which he denied). This wasn’t some remnant from the agency’s flirtation with LSD. Rather, it was a pretty obvious attempt to undermine the Chinese government, something the Chinese have complained about for decades. In declassified State Department memos, the organization says: “The purpose of the program … is to keep the political concept of an autonomous Tibet alive within Tibet and among foreign nations, principally India, and to build a capability for resistance against possible political developments inside Communist China.”

6. The conspiracy to kill Abraham Lincoln

The most commonly held version of events is that actor John Wilkes Booth acted alone when he assassinated President Lincoln inside Ford’s Theater. But it turns out Booth collaborated with no less than 9 other co-conspirators, including  Mary Surratt, the first woman executed by the U.S. government. First, there was David Herold, who helped Booth escape after leaving Ford’s Theater. Then, there was George Azterodt, who unsuccessfully attempted to assassinate Vice President Andrew Johnson. Even though Azterodt never actually attempted the act, he was, nonetheless, executed for plotting against the president. Meanwhile, coconspirator Lewis Powell did attempt to assassinate Secretary of State William Seward, severely injuring him. If you ever want to learn the full story of Booth’s traitorous act, and the desperate attempt to capture him and his team, you can’t do better than James L. Swanson’s Manhunt: The 12-Day Chase For Lincoln’s Killer.