His post-presidency has been legendary, but his presidency wasn't half bad either. 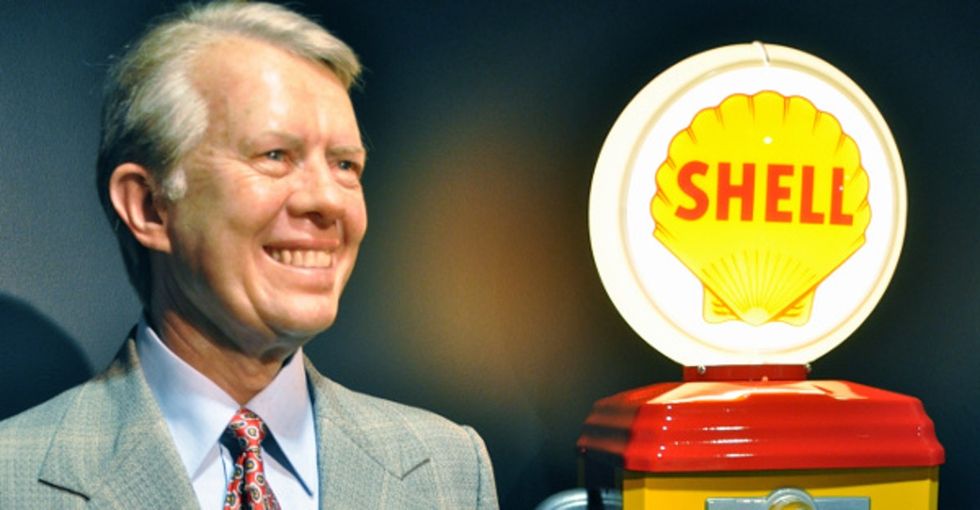 After being diagnosed with brain cancer in August, Jimmy Carter recently shared the good news that he's cancer-free. But even before that, the dude had already won life.

Despite his many detractors, Carter is straight-up one of America's most effective statesmen and all-around good guys of the 20th and 21st centuries. Yes, even during his presidency.

In order to properly honor and pay tribute to a man who, after 91 years, continues to prove the haters wrong time and time again, here is a by-no-means-complete list of his major accomplishments, wins, and assorted awesome deeds.

1. He brokered the Camp David Accords, the first-ever peace treaty between Israel and one of its Arab neighbors.

It's hard to believe, but in 1978, the Middle East conflict was even more of a funhouse-mirror disaster pile than it is today. Two all-out wars between Israel and various combinations of Syria, Jordan, Egypt, Lebanon, and Iraq in the span of six years had many in the region wondering when the next unrelenting crapstorm was going to explode.

In 1977, Egypt and Israel began negotiating a tentative peace, but talks eventually hit a roadblock and both sides began preparing to deploy their shame fingers for the ol' affixing o' the blame. That's when Jimmy Carter picked up the batphone and said (and I'm paraphrasing here): "Hold up. Put your pants on. You're both coming to Maryland and not leaving until we figure this junk out." And figure that junk out they did. The peace treaty was signed the following September, and despite their many disagreements over the years, the two countries have remained at peace to this day.

2. He stared down a debilitating disease that affects some of the world's poorest and most vulnerable people for 30 years ... and won.

Guinea Worm Disease is the stuff of sci-fi nightmares. Basically, a giant worm invades your body through contaminated drinking water and feeds off you until it's ready to burst back out through an excruciating, infected lesion. It's terrible and painful, and Jimmy Carter was having none of it.

According to Carter Center statistics, in 1986, 3.5 million people worldwide suffered from the disease. By educating people in affected areas about prevention and teaching local health care providers how to provide treatment, Carter and his organization managed to help slash that number to 126 reported cases in 2014. That's incredible.

Still, it's not quite enough for the big man.

When Carter was asked at a recent press conference what he'd still like to achieve now that he's been diagnosed with brain cancer, here's how he responded.

3. He pulled out of the Southern Baptist Convention when the group decided it would no longer allow women pastors.

Jimmy Carter is a born-again Christian and a dedicated Baptist. He teaches Sunday school to this day. But he has no patience for people who believe that excluding others is what J would D.

In 2000, the Southern Baptist Convention announced that women would not be allowed to be pastors anymore. And Jimmy Carter up and deuced out of there. After 76 years.

Carter has remained outspoken on issues regarding sexism in the church and the mistreatment of women and girls worldwide.

4. He categorically said that Jesus would approve of same-sex marriage.

In an interview with the Huffington Post last month, Carter said: "I believe that Jesus would approve of gay marriage. ... I think Jesus would encourage any love affair that was honest and sincere."

We can only hope that that when we turn 91, we all go as hog-wild IDGAF as Jimmy Carter has.

5. He wore sweaters in the White House and made people care about conserving energy.

The OPEC crisis of 1973-1974 — in which an embargo imposed by Middle Eastern oil-producing states created mass gasoline shortages — demonstrated that the United States was highly vulnerable to disruptions in its fuel supply. Recognizing that conserving energy and limiting fossil fuel consumption would be key to combatting such shocks going forward, Carter prepared to ask Americans to make those sacrifices. But in order to do that, he knew he needed to walk the walk, not just talk the talk.

Which he did. By giving a speech. While wearing a sweater indoors to demonstrate that he, too, had turned down the heat.

He was savagely mocked for it at the time. But ... dude was right. And years later, now that the need to limit fossil fuel use has taken on even more urgency, it looks awfully forward-thinking, doesn't it?

Thanks, Jimmy Carter. Here's hoping you give us another 91 years of awesome.