5 faces of Parkinson's disease, brought to you by Michael J. Fox. 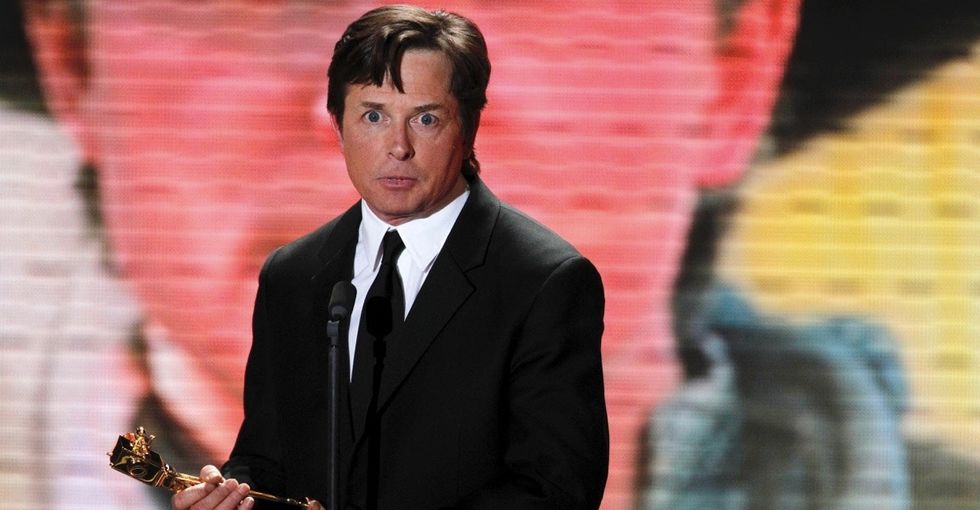 In 1998, Michael J. Fox revealed that he had been living with Parkinson's disease for the previous seven years.

The announcement came as a huge shock to the public. At the time of the announcement, Fox was the star of his own ABC sitcom, "Spin City." He joined a select group of public figures with the disease, alongside legendary boxer Muhammad Ali and then-Attorney General Janet Reno.

Fox strikes a post with Ali before giving Congressional testimony in 2002. Photo by Mark Wilson/Getty Images.

Then in 2000, he co-founded the Michael J. Fox Foundation for Parkinson's Research.

Using his celebrity to shine a light on the struggle people living with Parkinson's face, Fox's foundation hoped to get beyond building awareness and actually focus on helping others with the disease.

Fox speaks at a benefit to raise funds for stem cell research in 2004. Photo by Vince Bucci/Getty Images.

Since 2000, the organization has raised more than $450 million dedicated to Parkinson's research. Go, Michael!

In a new video, Fox is helping to demystify the disease in another way, too: by using his platform to tell others' stories.

Last year, the foundation released a video titled "Faces of Parkinson's." The video has five individuals with the disease explaining what their Parkinson's looks like. As Fox says at the beginning of the video, "I was 29 when I learned I had Parkinson's disease. I soon learned that each patient has their own version of Parkinson's, their own story to tell."

Here are five of those stories.

1. Susan Kauffman was diagnosed in 2006, two weeks after her 39th birthday.

"[Parkinson's] just came across me like, 'Where did this come from? Why me?'" she says. After a few years, Kauffman came to terms with the disease, resolving to do whatever she could to help find a cure.

All photos from The Michael J. Fox Foundation for Parkinson's Research.

Soon after, he began to notice his arm cramping up. He describes Parkinson's effects on his work, and especially on his drawing, as "discouraging."

"I was writing thank you notes to people for my 50th birthday party," he says in the video. "I would start the note, and the letters would get smaller and smaller. Sooner or later, the hand wouldn't move."

4. Joyce Chu noticed something was up while she was running.

"I just had problems running. My right leg just didn't keep up with the left leg," she says, admitting that she didn't think much of it at the time. It wasn't until her husband asked what was wrong that Chu became more aware of the changes and early symptoms.

She resolved to run one final marathon before hanging up her sneakers.

5. Brian Grant played professional basketball for more than a decade before he was diagnosed with Parkinson's.

In 2005, Grant was diagnosed with Parkinson's disease. Before the 2006 season, he announced his retirement from basketball. The eighth overall pick in the 1994 NBA draft, Grant was one of the world's elite athletes.

"My greatest fear is losing control of me," he said in a 2009 interview with ESPN, "Having someone have to take care of me. But that was at the beginning."

For extended versions of these stories, check out the Michael J. Fox Foundation for Parkinson's Research video below.