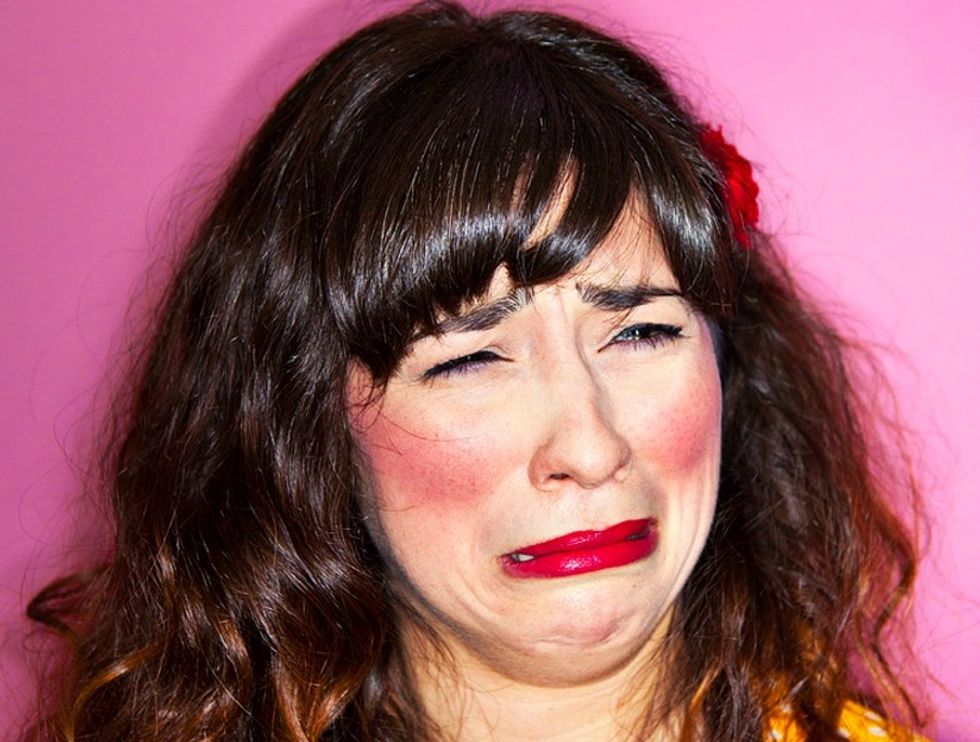 "Saturday Night Live" just hired its first-ever Latina cast member, so now's the time on Sprockets when we dance!

But seriously, folks, this is huge wonderful news that's been a LONG time coming. In its 41 years on air, SNL has only had two Latino cast members: Horatio Sanz and Fred Armisen.

The long-awaited addition of a Latina cast member shows the landscape of racial diversity on television is slowly but surely widening.

Without further ado, live from New York, it's Melissa Villaseñor!

Thank you @tylerossity for this capture of my roach man impression. @meltdowncomics

Villaseñor's journey onto the SNL stage has been a long time coming. She auditioned once before when she was only 21 (she's now 28), and she made it a ritual of sending the show a tape of her new stuff every summer — just in case.

"I’m starting to understand that when I visualize something happening and believe in it, I start seeing results. So I put myself out there," she said in an interview with Bird.

That's exactly what happened in 2011, when she killed it on "America's Got Talent" with two minutes of ridiculously good impressions.

Image via "America's Got Talent"/YouTube.

Her spot-on impression of Kathy Griffin alone is worthy of a spot on SNL. Villaseñor's dream of joining the NBC Saturday night staple came closer when she began work on an impression show "Daily Itineraries" for Más Mejor, a Latino-focusd studio that falls under the umbrella of SNL executive producer Lorne Michaels’ company, Broadway Video.

Villaseñor does an impression of Jennifer Lopez that rivals Maya Rudolph's, and it's even better because Villaseñor is actually Latina.

Villaseñor's been more than ready to take SNL by storm for years, but the show's much-discussed lack of diversity in casting likely got in her way.

According to Splitsider, since SNL's inception in 1975, only 15 black performers have been cast, and only four of them have been women. Currently, with the addition of Villaseñor, there are only five cast members of color on the show. So while it's great there are steps being taken in the right direction, it's still an agonizingly slow uphill battle, especially for women.

SNL's producers keep their reasons for maintaining a predominantly white cast closely guarded, for obvious reasons, though when asked about it by WNPR in December 2015, Lorne Michaels defended the show's casting decisions, saying, "It didn't come from any place of intent or meanness; it came from looking every year for the best people we can find."

As diversity in media has become part of a more mainstream conversation, however, the show's noticeable lack of it has created more and more controversy and raised questions among viewers and cast members. On Twitter, people even joked that SNL stood for #StillNoLatinos and it became a popular hashtag in recent years.

Bringing Villaseñor into the SNL family is a huge win for Latinas in the entertainment industry — and viewers at home.

According to a 2014 study, Latinas only make up 4% of female characters on television. Of that small percentage, many end up playing hyper-stereotypical Latina characters like Sofía Vergara's Gloria on "Modern Family."

Based on Villaseñor's wide spectrum of awesome impressions, however, she will likely open the floodgates for a wider variety of roles for Latina comedians and actresses on screens big and small.

This is an important milestone because representation in media matters. It has an impact in the real world, beyond the screen.

For example, Whoopi Goldberg credits Nichelle Nichols' portrayal of Uhura on "Star Trek" for inspiring her to pursue a career in entertainment. When Goldberg was little, she was so excited to see someone like her on TV that she immediately jumped up calling for her family, shouting, "Everybody come quick, come quick, there's a black lady on television, and she ain't no maid!"

Leslie Watching a clip of Whoopi. Photo via The View/YouTube.

Jones told Goldberg that seeing her on TV was an eye-opening experience. Like Goldberg reacting to Nichols before her, Jones said she immediately jumped up, calling for her dad to come see, "There's somebody on TV who looks like me! She looks like me! Daddy! I can be on TV."

There have been even fewer Latino performers on SNL and even fewer opportunities for young Latino kids to see themselves reflected in the media. Villaseñor's addition to the SNL cast in the upcoming season is a huge opportunity for her and for all the young viewers who will see her beaming onto their screens every Saturday night. It won't be long before an up-and-coming Latina comedian tells Villaseñor what her historic start on the show meant to her.

After all, a dream can be born out of five little words: "Hey, I can do that."