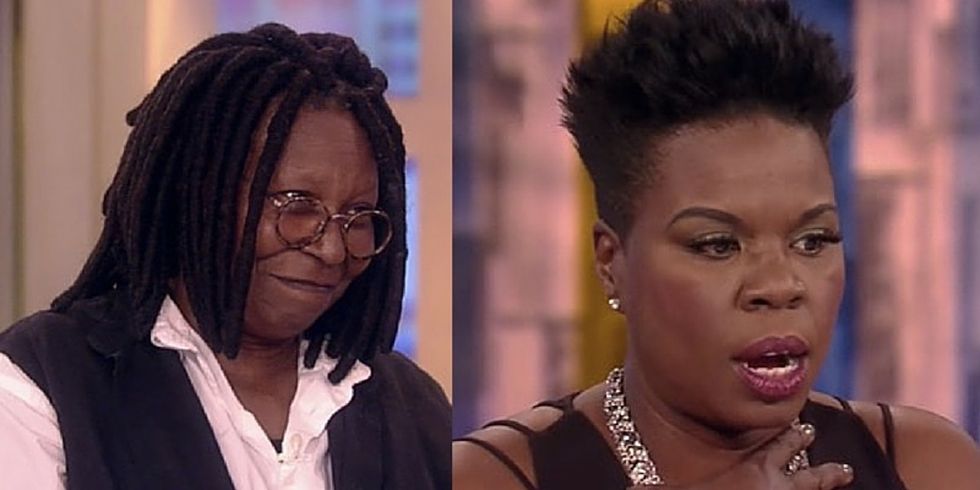 If you don't know who Leslie Jones is, she's about to be a household name.

The 48-year-old comedian, actor, and "Saturday Night Live" cast member is one of the stars of the hotly anticipated remake of "Ghostbusters," which opened July 15, 2016.

Jones at the "Ghostbusters" premiere in her Christian Siriano dress. Photo by Alberto E. Rodriguez/Getty Images.

Jones' stand-up comedy and work on "SNL" has already earned her some serious street cred in the comedy world, and now she's about to be officially launched into stardom.

Like most people in show business, Jones was once just a kid inspired by the people she saw on TV.

Chief among them? Whoopi Goldberg, the EGOT-winning actress and comedian who currently co-hosts "The View."

Goldberg in her 1985 HBO special. Image via OWN/YouTube.

Recently, Jones appeared on "The View" to promote "Ghostbusters," and she finally got to thank the woman who inspired her all those years ago:

"When I was young, my dad always let me listen to comedy albums. I always knew about comedy. I always loved comedy. The day I saw Whoopi Goldberg on television, I cried so hard. Because I kept looking at my daddy going, 'Oh my god! There's somebody on TV who looks like me! She looks like me! Daddy! I can be on TV. I can be on TV. I can do it. Look at her. Look at her. She looks just like me!"

Leslie Jones on "The View." Image via The View/YouTube.

Jones went on to describe a communications class she took in college where she performed a monologue as one of Whoopi's characters, including a white sweatshirt draped over her head.

Then, as if she'd been waiting her whole life to do it, Jones eloquently and emotionally thanked Whoopi for the inspiration she gave her as a child:

With the opening of "Ghostbusters" and her continued work in comedy, Jones is passing that torch of inspiration forward.

Millions of people will get to see Leslie Jones in a summer blockbuster, and millions more watch her every Saturday night on one of the most important and iconic comedy programs of all time.

If even one of them sees her and says: "She looks like me. Maybe I can do that too," then that's a job well done.