30 years ago this university gave Trump a degree. Now the faculty voted to take it away. 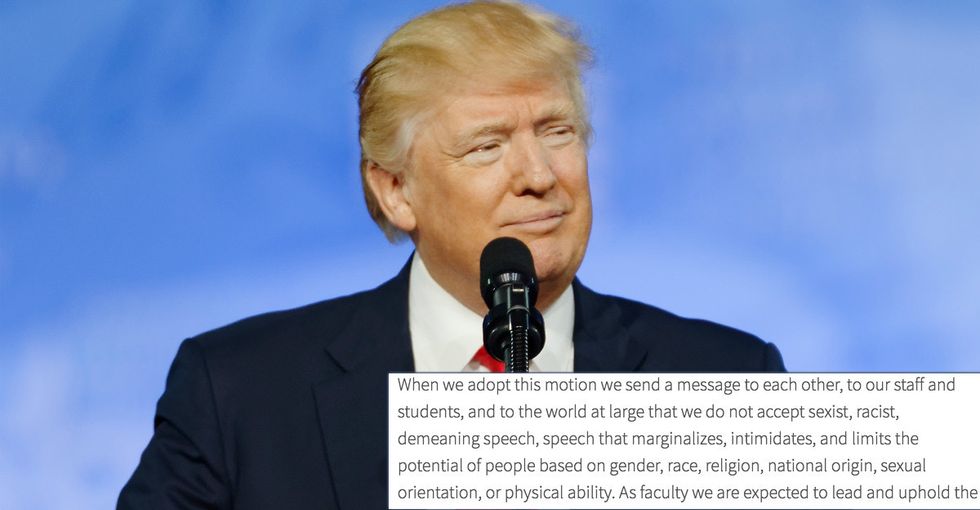 Decades later, voting to take away that degree has become a way to send a message about inclusivity and tolerance.

Citing Trump's "racist" and "sexist" comments, Lehigh faculty has voted to strip away that honor.

Trump actually had five honorary degrees — now, he'll have three. Robert Gordon University in Scotland rescinded another in 2015. Two others are from Liberty University, and the third was an honorary doctorate of humane letters awarded by Wagner College in 2004.

President Trump received a honorary degree from Liberty University in 2017.  Photo by Nyttend

In January, Lehigh faculty members put forward a motion to rescind Trump's honorary degree. In a letter posted to the university website, the proposed motion reads:

"When we adopt this motion we send a message to each other, to our staff and students, and to the world at large that we do not accept sexist, racist, demeaning speech, speech that marginalizes, intimidates, and limits the potential of people based on gender, race, religion, national origin, sexual orientation, or physical ability."

A vote was held and passed with more than 80% of the faculty supporting it.

Michael Raposa, who helped draft the motion, said it's a statement about Trump's language and behavior, not his politics. "We did not want this to be a debate about politics," he said.

The faculty's motion will now be presented to the university's board of trustees to make the final decision. If the degree is rescinded, it won't be the first time Lehigh University has removed an honorary degree. They made a similar decision in 2015 to rescind Bill Cosby's degree in light of allegations of sexual misconduct.

The larger message is that people who, like Trump, say and do hurtful things are no longer guaranteed the privilege of enjoying symbols of respect, like his honorary degree. "It's really important that the faculty has spoken," Raposa said.

Trump has a long, controversial history with the education system.

During the 2016 election, a lawsuit was filed against Trump and the now-defunct Trump University, with former students saying they were misled on a number of fronts about what they were getting for their time and money.

Since becoming president, Trump has also been criticized for his appointment of Betsy DeVos as Education Secretary.

He's even felt it necessary to defend his own education:

"You know, people don’t understand. I went to an Ivy League college," Trump told reporters last fall; he graduated from the Wharton School of the University of Pennsylvania in 1968. "I was a nice student. I did very well. I'm a very intelligent person."

The Lehigh faculty vote isn't petty — it's a way of defending values without being partisan.

A few Trump supporters have criticized the decision, but really, the only potential victim in this story is Trump's ego. Yes, some of his fiercest critics will enjoy watching him being publicly reprimanded.

But the real message is that part of receiving an education is learning to respect your fellow students and people in general. Rather than lash out at Trump personally, the faculty of Lehigh are instead choosing to effectively pull an endorsement because of his bad personal behavior. We may not always be able to stop people from behaving badly, but refusing to celebrate and empower that kind of behavior is a good place to start.